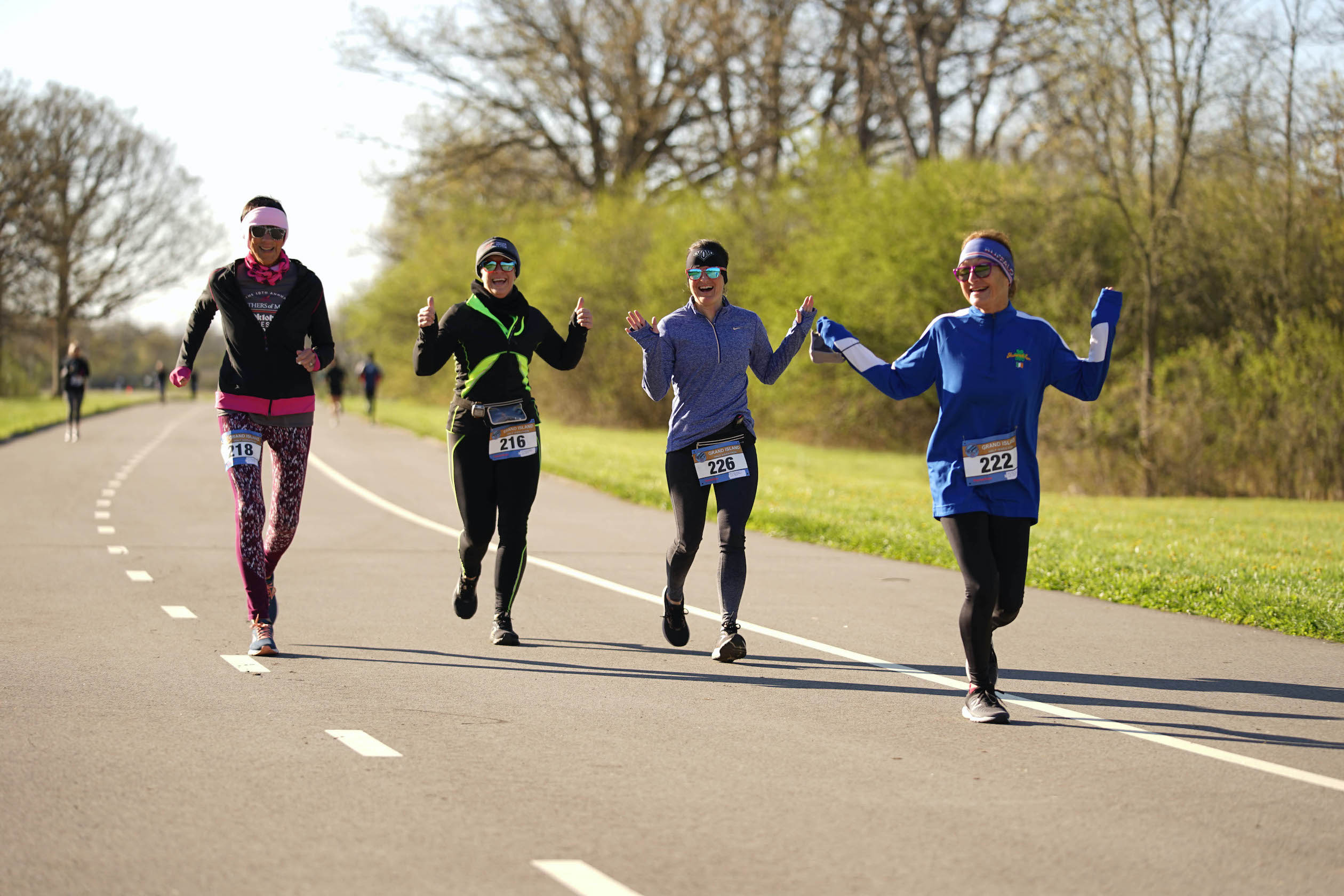 Grand Island Half Marathon set for May 7

Scott Strang and his son, Drew, have run as a duo team in several marathons, such as the 2019 Marine Corps Marathon. On May 7, the duo will run in the 28th running of the Grand Island Half Marathon, which is organized by the Greater Buffalo Track Club. The race will start at 8 a.m. in Beaver Island State Park. Runners will run down the multiuse trail on the West River to the Big Six Marina. They will then loop around and run back to the park. The distance of a half marathon is approximately 13 miles.

The half marathon has been held on Grand Island for the past 14 years.

A duo team is made up of one person running and pushing a wheelchair, explained Brian McElroy, race director for the Grand Island Half Marathon. He explained that Strang, whose son has cerebral palsy, has entered the race as a duo team. “He is pushing Drew in a racing wheelchair. It’s kind of along the same theme as the Miracle League.”

A parent or any other guardian who has a child who uses a wheelchair to get around at least part time, is welcome to enter the race, McElroy said. “We hope to have a half dozen entries or so in the duo team category.”

Strang, McElroy said, is the Western New York ambassador for a national group called Ainsley’s Angels. Based in Washington, D.C., Ainsley’s Angels organizes half marathons in memory of Ainsley Rossiter, who was diagnosed with a rare degenerative condition called infantile neuroaxonal dystrophy (INAD) in 2007 shortly before her fourth birthday. Her parents first took her out for a run in her wheelchair in 2008, and she enjoyed running until she passed away in 2014.

Money raised at the Grand Island Half Marathon will be donated to the Miracle League of WNY, a local nonprofit that gives local children and youth with physical or mental disabilities the opportunity to play baseball at its field at Veterans Park on Bedell Road.

“Their group allows children, who typically couldn’t go out on the field, to play baseball,” McElroy said. “If you have a child who’s using a walker or is in a wheelchair, as you know, it’s very difficult. The Miracle League field is custom made. I believe that it’s rubberized to allow those who need assistance in walking to be on the field.”

There are several ways to donate money to the fundraiser for the Miracle League. “We also have sponsors who are matching the sum of those donations,” McElroy said.

One such sponsor is Vienna Laurendi of Howard Hanna Reality on Grand Island. “On periodic days, she’s agreed to match, dollar for dollar, the donations that we raise that day. So, that’s a nice boost that we get on those particular days.”

A second way to donate comes from proceeds of the race.

“From the net profit of the race, we’ll also make a donation to Miracle League,” McElroy said.

A third way to donate is through “direct donations that the runners give when they sign up. They can tack on a few dollars to the registration fee. That goes right to the Miracle League,” McElroy said, adding “There are three ways that we are raising money for them. Probably, in late May, we’ll present them with a check and have a little check presentation over at the park.”

He added, “In the past, we’ve donated to various sicknesses and diseases, like cystic fibrosis, melanoma research, a direct contribution to Roswell Park. We’ve done cancer in various iterations for a couple of years, Glory Be To Kids (a youth organization in North Tonawanda), the West Side Development Initiative in the west side of Buffalo, which supports low-income businesses to give them seed money to start their business, and there are others.”

McElroy said he is hoping the race attracts at least 500 participants “of all ability levels.” Prior to the COVID-19 pandemic, approximately 500 runners from all over Western and Central New York, as well as a few from Pennsylvania, Ohio and other parts of the northeast and other locations within the U.S., participated in the race. Now that COVID-19 restrictions are being lifted, McElroy said he is hoping that participation will go back to pre-COVID levels.

One thing that attracts runners to the Grand Island Half Marathon is the race course itself.

“They love it,” McElroy said. “We have had that course on the parkway for the past 12 years or more. When they converted it, we had to reroute our course temporarily for one year. When the connector trail was finished, we moved back to that original course along the West River Parkway. What’s nice about it now is that it’s totally closed to traffic. We don’t have to shut down the road for the runners and then reopen it after a few hours. Because it’s a bike path, there is no traffic to contend with. So that’s nice. It’s scenic. It’s right on the river. It’s a flat course, which makes it good for any runner, whether they are experienced, looking for a fast time, or they are looking for a less hilly course, I guess you could say.”

McElroy encourages people to sign up for the half marathon: “Anyone can enter the race. It’s open to all abilities, all ages. We have people as young as 17 all the way to 72, who are registered. Of that, 52% are women and 48% are men. That’s where we stand currently. It might change as we get closer to the race.”

There are two ways of entering the half marathon, McElroy said. “They can enter individually, but they can also form teams. If you, for example, wanted to form a team with a few friends or family members or co-workers, you could form a team and name it ‘Gerard’s Gang’ or something like that. That would be the name of your team. And then, you could compete amongst yourselves or with the other teams.”

McElroy said, “I would say that the race is very accessible. It’s open to runners of all abilities, all ages. Right now, we have runners ranging from 17 to the early 70s. I am sure that, by race day, we will have registrations even older than that. And we have people who take up to four-and-a-half hours to finish it. If you’re not an established runner, and you don’t think that’s a distance you can run, you can always do what they call a walk-run program. You run a little bit and then you walk and then you run a little bit more. So, it’s very accessible because of the nature of the course being flat, and there’s no time limitation for people to finish, as there are in other races. I would say that it’s a very accessible race for people to enter and get your feet wet for the half marathon.” 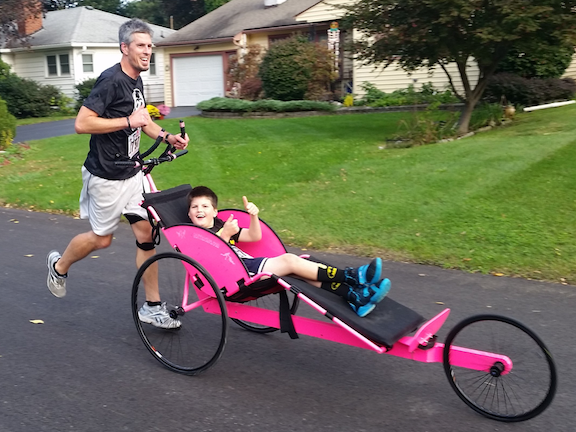 Scott and Drew Strang of Williamsville compete together in a marathon. (Submitted photo)

“I offered the Chamber of Commerce members a promotion where, if they wanted to have a tent for their employees or their company team at the finish line, I offered that to chamber members for free,” McElroy said. “So, typically, if someone wants tent space at the finish line, which would be a $200 rental fee, for chamber members, we are offering that for free. So, any company that wanted to have a team at the race, if they have a 10-by-10 popup tent, they could set it up for free at the finish line. Also, they would have their race shirt customized for free.”

A marathon runner himself, McElroy described the feeling of completing a race: “It’s a lot of work, and it takes a lot of determination to do the training and then get through the race itself. It’s very exhilarating as well. But as I was saying for other entrants in our race, when you finish, you see the exhilarated feelings that they have. I feel the same way.

“Our goal is always to put on a safe, fun race for people. For 28 years now, we’ve been able to do that.”

McElroy said he is happy to see people come across the finish line after running for 13 miles: “I think that people are very happy when they finish this very physical task. Seeing the looks on their faces is very rewarding, I think.”

For more information about the race, check out the Greater Buffalo Track Club’s website at https://www.greaterbuffalotrackclub.com/. To sign up for the half marathon, go to https://runsignup.com/Race/NY/GrandIsland/GBTCGrandIslandHalfMarathon?fbclid=IwAR067rTSPK10YDNj5DXA6_uXGOayWiuk2VI_hyMVUkjHthWhh1s3Mv0ZMD4.