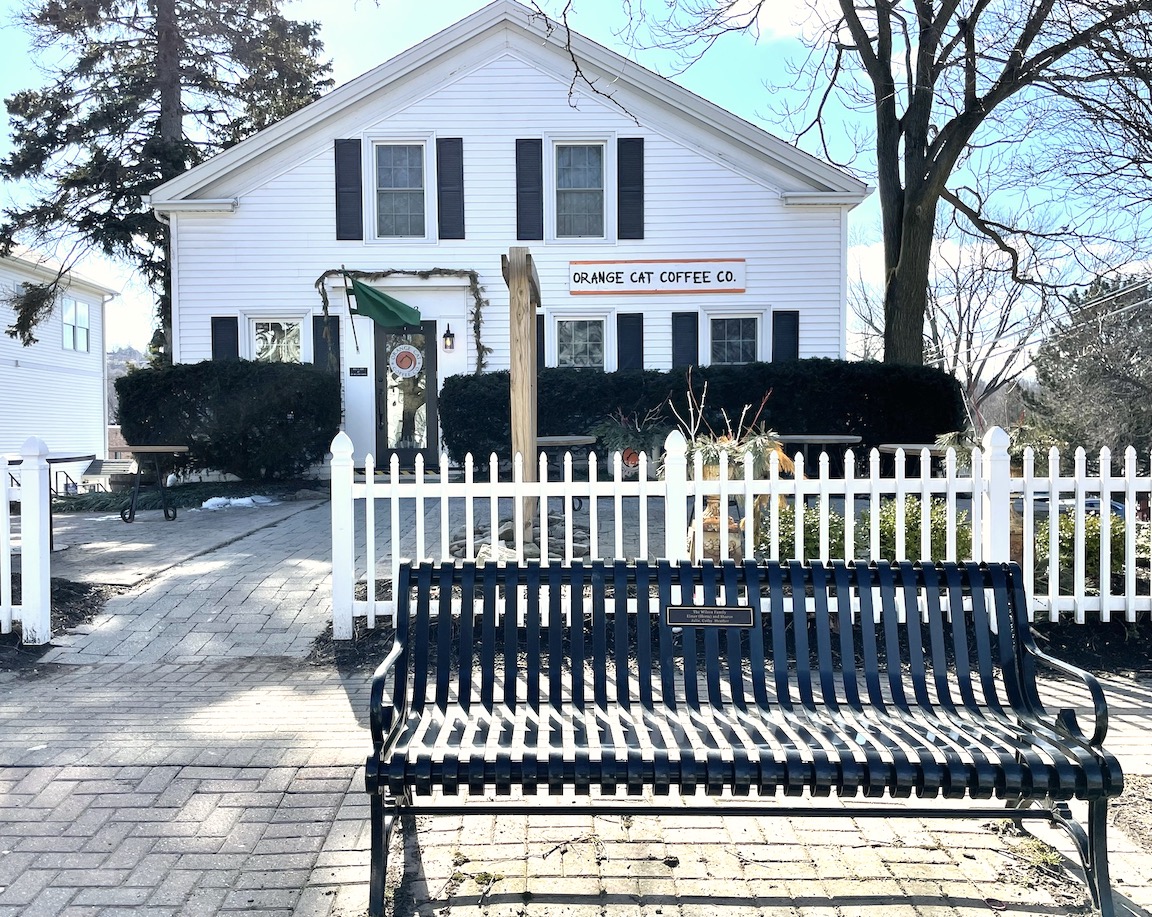 The Village of Lewiston plans to add a second memorial bench - this one honoring the late Bruce Sutherland - to the right-of-way at the Orange Cat Coffee Co. A similar bench exists there now, in tribute to the Wilcox family.

Board eager for spring events

Trustees in the Village of Lewiston have decided the best way to honor their former colleague is to memorialize him in front of his favorite spot.

At the monthly meeting on Tuesday, the board voted to purchase a new metal bench to be placed in front of the Orange Cat Coffee Co. on Center Street in memory of Bruce Sutherland. The former deputy mayor and community advocate passed unexpectedly on Dec. 27.

Deputy Mayor Vic Eydt said, “My feeling is that the bench would be much more fitting (than renaming a roadway). Bruce went to the Orange Cat all the time. In fact, he still has a peg up there for his hat. I think this would be more fitting for him.”

Residents Tom Deal of Deal Realty and Lee Simonson, a former Niagara County legislator, led a push to rename South Sixth “Sutherland Street,” as that was Bruce’s neighborhood. Deal made his case at two board meetings, while Simonson wrote, “Bruce not only served Lewiston well in elected office, but as a volunteer for many organizations. He was the highest-ranking military veteran in Lewiston history, serving his nation with distinction.”

Mayor Anne Welch said, “After discussion with the board, I also talked to Jackie Sutherland (Bruce’s wife) and her daughter, Morgan. They also agreed that a memorial bench at Orange Cat would be very fitting for Bruce.”

The board will look into bench prices and installation areas.

Eydt said not everyone on South Sixth Street was in favor of a name change.

Welch said, “We heard from some of the other commissions and boards, also, that they worried about the addresses, that they would have to be changed. And the streets would go from Seventh Street, skip over Sixth Street (in numerical order), and then to Fifth Street. … Plus, we have North Sixth Street on the other side.”

Trustee Nick Conde said, “Plus all the work of the people having to change all the utility bills and everything.”

Eydt referenced the Feb. 6 passing of Ken Kenney. He said that is someone else who could lay claim to a roadway, as Kenney served as a trustee for a decade-and-a-half. Eydt suggested it’s not practical to rename streets.

“You’re stepping on a slippery slope there,” he said.

Board members voted to approve a development plan and the New York State Environmental Quality Review Act Environmental Assessment Form for the proposed quick care facility at 860 Center St. When built, the urgent care center is expected to be open from 7 a.m. to 11 p.m. daily.

“I think it’s a great addition to the village,” Welch said.

She added, “There’s no competition with any of the other businesses. I think it’s really needed in the village.”

An unnamed national company has been in talks with land owner Emery Simon about acquiring the long-vacant parcel. Purchase was said to be contingent on plan approval.

Read more about the quick care center proposal on the Tribune/Sentinel website, www.wnypapers.com.

Recreation Director Brendan McDermott announced “Spring Fling” will return Sunday, May 15. The annual event is a favorite for families who enjoy food, games and a children’s run/walk.

Welch said she’s hopeful that day also will mark the opening of the inclusive playground at Marilyn Toohey Park, behind the Red Brick Municipal Building.

“As soon as the weather breaks, they’ll be back to finishing the playground,” she said. “That should be a really fantastic ‘Spring Fling’ this year.”

•Welch said poet Robert Giannetti and metal artist Dan Buttery have agreed upon a design to commemorate the author’s work, which he contributed to the International Peace Garden dedication more than a decade ago.

A rededication ceremony is tentatively set for May 1.

Giannetti shared “The Peace Garden” at a ceremony in July 2010. The poem was engraved into a piece of wood, which began to show signs of degradation in recent years. This new metal rendition is expected to last longer and look better.

“It really came out nice; they both put their own design work into it,” Welch said. “It looks really nice.”

•Historian Russ Piper said a dedication ceremony is set for 1 p.m. July 3 for the revamped Potter’s Field cemetery, located next to First Presbyterian Church on South Fifth and Cayuga streets.

Trustees voted to approve a motion granting Lewiston Porter Youth Football use of Richard F. Soluri Park at the Lewiston plateau to hold flag football practices and games, plus tackle football games and cheer practices, from mid-April through the first week of November. LPYF used the recreation area in 2021.

“This has turned out to be a great use for that park up there,” Welch said. “I’m really pleased that they’re moving forward and adding more activities for the kids.”

“I just want to thank the residents for helping us with snow removal this winter,” he said. “Some people go out there and they help us; they do their sidewalks in front of their house. And on top of that, they appreciate what we do. They bring us food down, doughnuts down, or treats. My crew definitely appreciates that.”

Wills also reminded residents to make sure their trash is properly bagged, contained and secure when placing it out for collection – particularly when winds are high, as they have been lately.

“Keep the garbage out of your neighbors’ yards,” he said.

“Keep it away from the street, in case the plow has to come by,” Welch said.

Niagara River Region Chamber of Commerce President Jennifer Pauly provided an update on 2022 festivals. Two May events have been nixed.

“We are not holding the Smelt Festival or Taste of Lewiston this year,” she said. “Those two events are weather-dependent as well as outdoor food-based events.”

Instead, Pauly said the Chamber of Commerce would “focus on our networking events, Jazz Festival, Harvest & Hops Festival, awards dinner in November, Small Business Saturday and the Christmas Walk. We also look forward to helping bring back Summerfest in the Town of Porter this summer. We are focusing on those events and making them a success.”