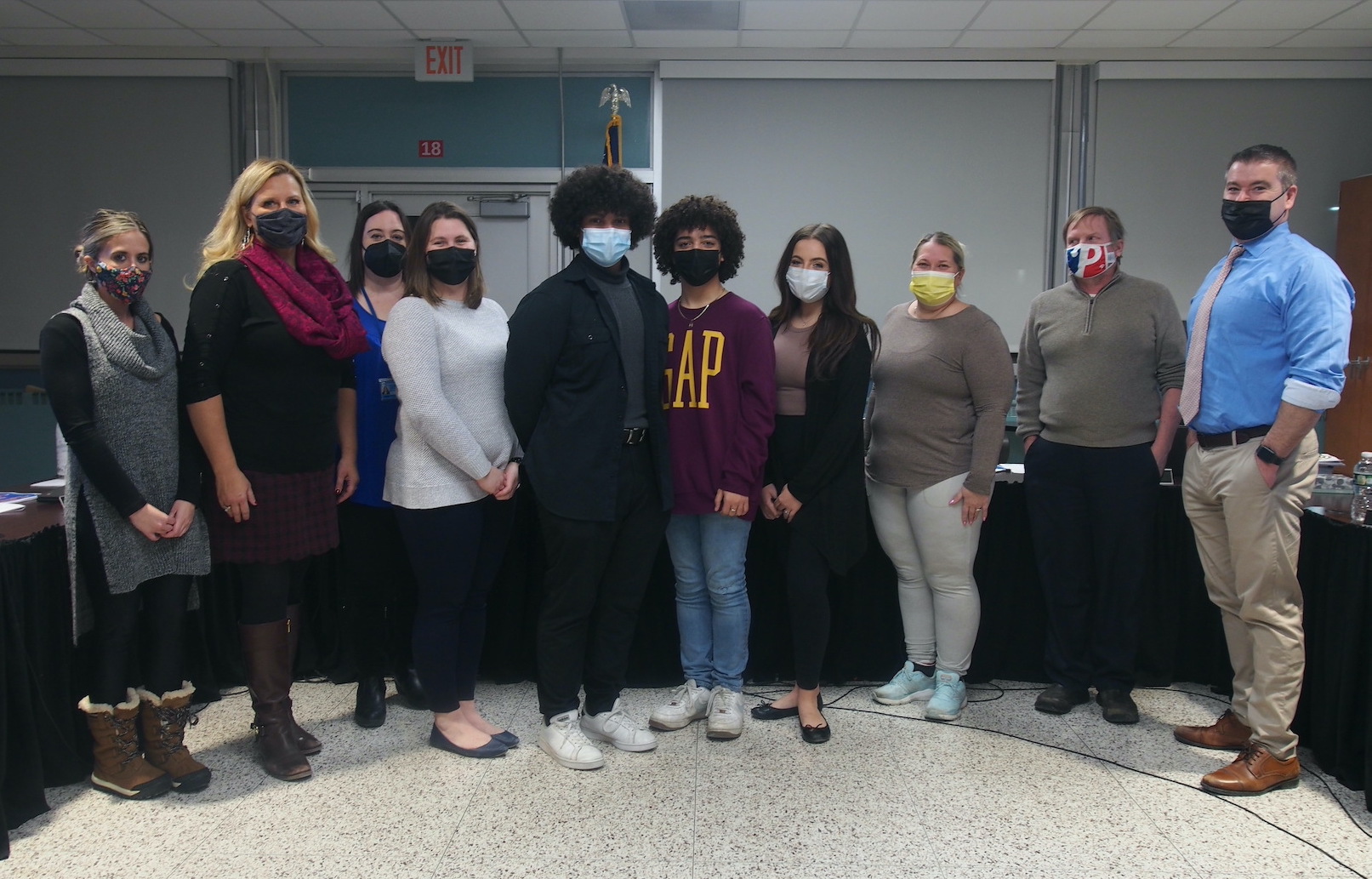 Juliana Huber (Dorothy), Alejandro Perez (Cowardly Lion) and Anthony Borzillieri are photographed with the Grand Island Board of Education at the Feb. 7 meeting.

In February 2020, a month before the COVID-19 pandemic resulted in a nationwide lockdown and months of virtual education, Grand Island High School presented the musical “Beauty and the Beast.” None of the performers or their teachers had any idea that it would be two years before another musical would be produced at the high school.

Grand Island High School senior Juliana Huber, who spoke as the student ambassador at the Feb. 7 Board of Education meeting, shared her experiences with musical theater and how much it meant to her after everyone’s lives were “flipped inside out.”

She said, “Hello, I’m Juliana Huber, and I will be speaking about the musical. I played Dorothy in ‘The Wizard of Oz,’ and we also have our cowardly lion and our scarecrow here. This past weekend, our school had the privilege to perform our first musical production in two years. The Grand Island High School production of the ‘The Wizard of Oz’ had three performances: Friday at 7 p.m., Saturday at 1 p.m. and at 6 p.m., including a meet and greet with activities like cookie decorating, coloring, and picture stations for the kids, as well as a basket raffle. Our show was a huge success, seeing that we sold over 1,200 tickets, and 65 patron ads were included in our program from all over Western New York.”

Juliana said she performed in a previous production of “The Wizard of Oz.” “I was 8 years old, and I remember being part of the Lullaby League. I was a little ballerina. It’s so full circle that this is probably the last show that I’ll ever do. I’m Dorothy, and it’s ‘Wizard of Oz’ again.”

After graduation, Juliana is planning to go to college to study art education. She said her experiences in theater were very valuable to her, even though she is planning to take her future career in a different direction. She said, “Theater in general has been such a positive impact on my life with the people that I’ve met, the experiences I’ve had. I just love it so much. I encouraged a lot of little kids, especially at the meet and greet, who said, ‘Oh my gosh, you do this.’ I said, ‘Yeah, and you can do shows, too. Get involved. It's awesome. You’ll meet amazing people, amazing teachers. It’s a great way to find your confidence, to experience your creative side.’ ”

Amy Boutet, who directed and co-produced the show with Cheryl Chamberlain, also talked about the meet and greet. “If you were lucky enough to come to the meet and greet, that’s where the magic really happened. It was magic to watch our little kids, who have been living in this kind of crazy world, come and, just for a few hours … it seemed like there was something so beautiful about it. These kids really made them feel special. Alejandro (Perez, who played the role of the Cowardly Lion) took off his courage badge and put it on one of our students because they were nervous to meet (the cast). It just goes to show that theater is a wonderful tool for our students to really cross over and make connections.”

“I can tell you, as the director and as the producer, when you have this talent that comes in as a freshman into our doors, we’re so excited for the next three years. If you were lucky enough to see it this weekend, you could tell that there is so much potential for us to get better and better and better,” Boutet said.

Alejandro said theater has always been part of his life. “My family has really been in touch with instruments, musical stuff, and even going so far as to co-own a theater company in the west side. Performing arts has a strong hold on my life and how I hold myself. It’s very important to me. I was so glad to make my debut here as the Lion.”

He added, “I just took this chance to really become the Lion. I love the stage. I can’t live without being someone else on stage.”

Boutet said, “He is the epitome of our method actors.”

Method acting is a technique used by actors to completely identify emotionally with their characters, actually becoming their characters while they are playing the roles.

Anthony Borzillieri said he has participated in musical theater since he was 7 years old and that, in a previous school, he played the role of Captain Hook in Peter Pan. “I don’t really come from a musical family. A lot of my family is nurses, police officers, employees in correctional facilities, so it was pretty out of the box for me to do this. My family has been pretty supportive of me throughout this.”

During the course of the 12 weeks of auditions, rehearsals and performance, the cast bonded and “became a family very quickly,” Juliana said.

Anthony commented, “The last show brought so many emotions. We were all crying on stage a lot, crying today a lot, and crying before this a lot. It was all really a great experience. I learned so much from Mrs. Boutet, of course. It just taught me so much about acting, learning to develop a character, and knowing that I don’t have to be exactly like that character, but it’s always good to embody most of it.”

“We all love each other, and that’s why we cried so much,” Juliana said. “We have made countless memories that we will cherish forever and formed bonds that will never be broken.”

Boutet said she appreciated all of the effort the students put into the production. “The students took in stride having to sing and do all of these things out of the box, and they’re always willing and always game, and we tap danced them until they didn’t have any toes left.”

Juliana also expressed gratitude to all of the teachers involved in making the production a success. “This production would not have been made possible without our amazing teachers, Mrs. (Amy) Boutet, Mrs. (Jennifer) Mernitz, Mr. (Matthew) Ells, Mr. (John) Reed, Mr. (Mark) Gorton, Mrs. (Cheryl) Chamberlain, Mrs. (Nancy) Keller, Mr. (Shawn) Sweet, and two Grand Island High School alumni, Catie Kleinschmidt and Faith Gworek, who came back to choreograph. These people and many others have all dedicated so much of their time in making sure that, after all of our lives were flipped inside out, due to the pandemic, we still got to experience something so dear to all of us, musical theater. I can speak for all of us students when I say that we will be forever grateful for all of the hard work that they put into making sure that this show happened.”

And there was one more participant who made the show fun and delightful. That was Dottie, a small dog that played the role of Toto.

“She is the cutest thing, and she brought so much joy to all of us. You can tell that she got a little tired by the second performance on Saturday, but we love her,” Juliana said.

Alejandro took the dog’s antics in stride. “As the Lion, I often scared her, so that provoked her to bark at me and bite me during rehearsal. I reacted to it like, ‘Oh, I’m scared!’ I really think it worked out. I think that Dottie did a great job. It was an overall great experience to have a real dog there. It really sold the feeling that you were in Kansas or in Oz with a dog.”

Boutet said the show was such a success that there is already discussion about next year’s musical. “It’s crazy. We’re packing away stuff. ‘Oh, thank goodness, that’s done,’ and we’re already starting to talk about next year.”

“Come see next year’s show, whatever it is!” Boutet said.