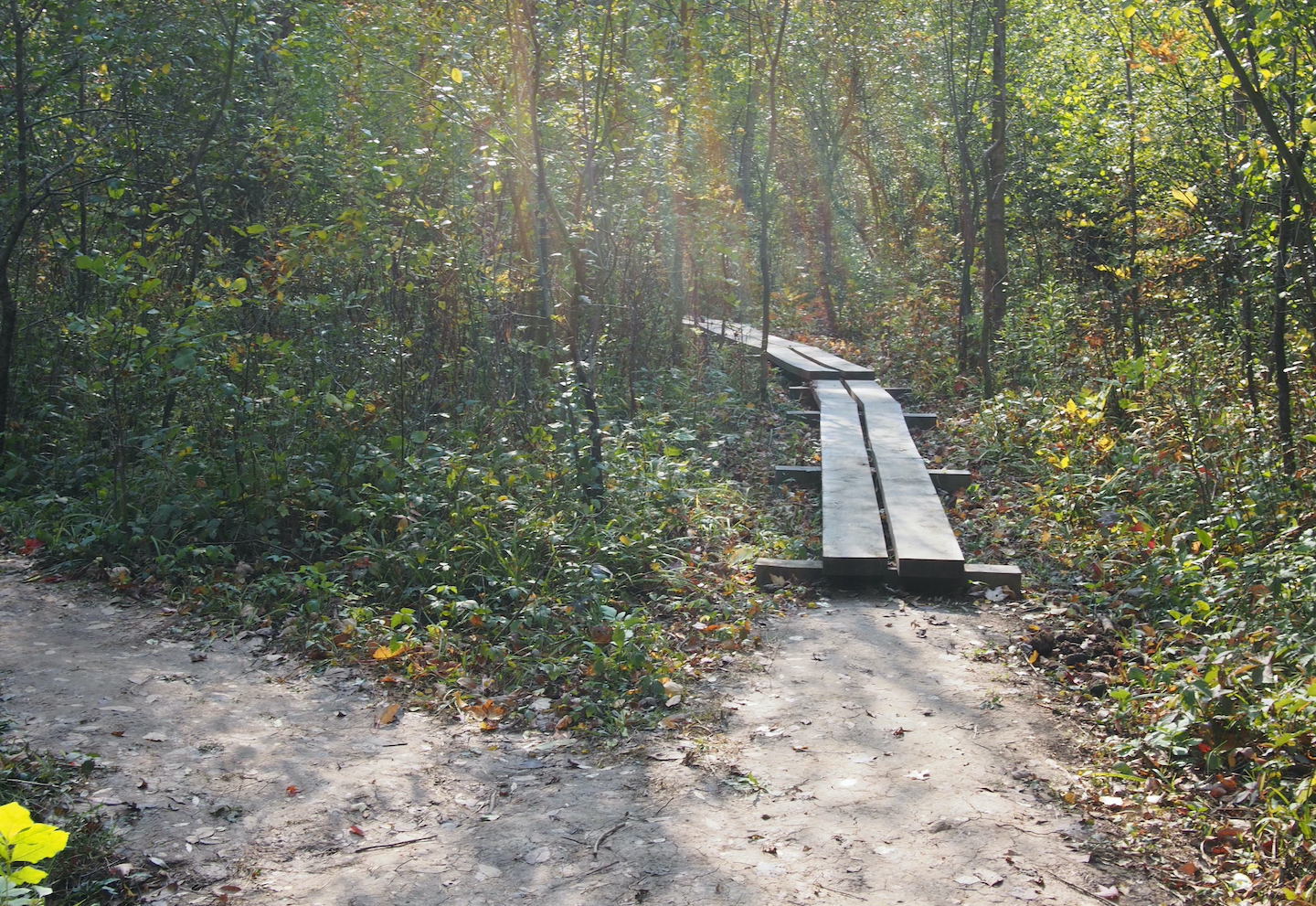 The trail at the Margery Gallogly Nature Preserve, owned by the Western New York Land Conservancy, is a bog bridge. It's a raised surface, as the ground in spring tends to be very wet. Jajean Rose-Burney said, "There is standing water throughout most of the preserve in the spring."

Two hundred years ago, when most of Grand Island was covered in dense forests of hickory and oak trees, the pileated woodpecker established its nests annually and raised its young.

“The pileated woodpecker is the large one with a big crest. It makes a lot of noise,” explained Jajean Rose-Burney, deputy executive director of the Western New York Land Conservancy. “They need something like 10 square-miles of mature forest in order to raise their young. They need big, old trees, and trees that are so old that they start dying. Tree cavities have a lot of insects. So, this is the kind of forest that they need to feed their young, have a territory.”

In the early part of the 19th century, nearly all of the white oaks on Grand Island were clear cut. The wood was transported down the Erie Canal and was fashioned into masts for tall ships. The land became farmland, and pileated woodpeckers were no longer seen on the Island.

“They would have been abundant on Grand Island 200 years ago, and they would have disappeared from Grand Island when the forests were cut down,” Rose-Burney said. “They do not live in farm areas. They don’t live in pastures. A patch of forest isn’t enough for them. We started seeing pileated woodpeckers on Grand Island about 10 years ago. No one yet has found a nest, so there have been no confirmed nesting of pileated woodpeckers. But we know that they are nesting somewhere. Maybe it’s at the Margery Gallogly Nature Preserve (adjacent to Assumption Cemetery on Whitehaven Road). Maybe it’s near Gallogly in someone’s private forest. But it’s really special to think that, after 200 years, the woodpeckers are back, and the next person to find a nest on Grand Island in one of these forests, in one of these big old oak trees, will be the first person to see a pileated nest in 200 years.”

On Dec. 22, it was announced by the New York State Attorney General’s Office that the Western New York Land Conservancy, Citizen Coalition for Wildlife and Environment, and the Erie County Department of Environment and Planning won three of the 14 grants provided under the Tonawanda Community Environmental Benefit Program (EBP), which was designed to protect Tonawanda’s environment and public health. These three organizations will use their grant money for programs that will directly impact Grand Island.

The organizations that won the grant funding were chosen by community residents, who voted between Sept. 20-26 for the environmental programs that they wanted to see funded. The grant funding, which totaled $909,384, is part of a settlement reached by the Office of the Attorney General and the New York State Department of Environmental Conservation over environmental violations at the former Tonawanda Coke facility, according to a press release from Attorney General Letitia James. 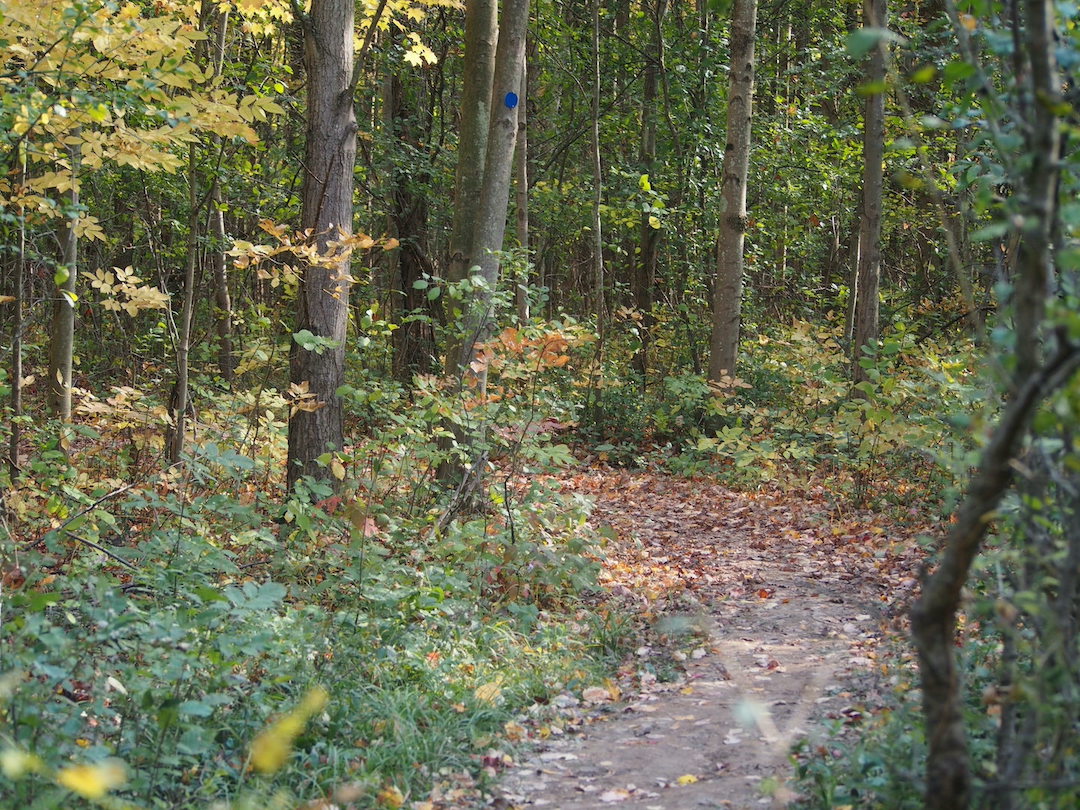 Dave Reilly, who runs Citizens Coalition for Wildlife and the Environment with Nicole Gerber, said, “The grant is intended to address very specific communities that were affected by Tonawanda Coke. And so, we have to be in a location that is conducive to all of them being able to attend. That includes North Tonawanda, Tonawanda, Kenmore, North Buffalo, Grand Island, Wheatfield. Each of those is our target audience.”

Rose-Burney said, “On Grand Island, we have three nature preserves – the Margery Gallogly Nature Sanctuary, which is adjacent to Assumption Cemetery; and the Nike Missile Base Park, which the town owns; with a new trail system that the town just built that connects with our trail system. There, we’re going to be doing more habitat restoration for wildlife – invasive species controls, plantings, trying to improve the habitat for the forest wildlife.

“The Love Road preserve is a property that we purchased with the Niagara River Greenway’s Ecological Standing Committee funds last year. We purchased it from the Buffalo Ornithological Society. We’re going to try to do some habitat restoration. We will do some improvements there to make it easy for people to access the site. That preserve is not going to be generally open to the public all of the time because there’s no parking. The access to the street is very narrow. So that preserve will be open to the public on guided hikes and by reservation, but we will do improvements, so it’s possible to go there when we do organized hikes.

“The Funk preserve, which is 10.5-acre property that we purchased in November 2021 on Staley Road, is mostly wildlife restoration. We’ll be dealing with invasive species, improving the forest. There are wetlands there. And we will do some plantings.

“That’s the big picture of what all of that funding will allow us to do. Improvements to four nature preserves (including the North Tonawanda Audubon Nature preserve), some public access improvements, a lot of wildlife habitat restoration. It will help provide habitat for wildlife, help with cleaning the air, help with filtering the water, reducing flooding, stabilizing some stream banks, reducing erosion, and that ultimately helps with water quality all of the way down stream and the river. It’s a nice amount of money. It’s a great opportunity. It seems that the community is really interested in the quality of the environment and with being able to access nature in their back yards.”

In addition to habitat restoration, the Land Conservancy will also team up with the Buffalo Audubon Society to do educational programming “so kids from these communities – Grand Island and North Tonawanda – can have an opportunity to learn about nature, ecology, potential future careers, and the environment,” Rose-Burney said.

Educational programming is the centerpiece of the event being planned by Citizens Coalition for Wildlife and the Environment, tentatively scheduled for June 4.

“Our event has three specific elements to it,” Reilly said. “There will be presentations on topics of ecological and habitat restoration in our backyards and in our community spaces so that people can think about how this all fits into a bigger picture of responsibility and what our role can be at the individual level. Second, we will have lots of different community organizations that focus on environmental issues. We’re thinking 10 to a dozen, maybe even more, that will all be there to share their specific expertise on different aspects of that. These are many of the organizations that do a great job on anything from sustainable energy initiatives, mitigation of pollution, restoration of specific habitats.”

“And waterways,” Gerber added. She explained, “When you think of bringing education to the community, it’s really about education on changing our mindset on the importance of plants and animals and habitats. We need to learn how we as individuals can contribute to healthier ecosystems that will benefit biodiversity, but also improve our community health.”

“They (environmental organizations) will table (at the event),” Reilly said, “and they will work with us to share information and to educate all of the participants and the attendees. And then, third, what we have is a native plant giveaway so each attendee will get a tree, a bush, or a flowering plant so they can start the process of transforming their own spaces into a more healthy environment.”

He added, “I think that the more you know, the more you recognize how critical it is that we respect each living creature and its role that it has to play within ecosystems. The best indicator of ecosystem health is biodiversity.”

It is anticipated that the program will last for half a day, possibly from 10 a.m. to 3 p.m., Reilly said.

The third funded program that directly impacts Grand Island is being provided by the Erie County Department of Environment and Planning, which was awarded $25,000 for “Subsidized Community Rain Barrel/Compost Bin Sale.”