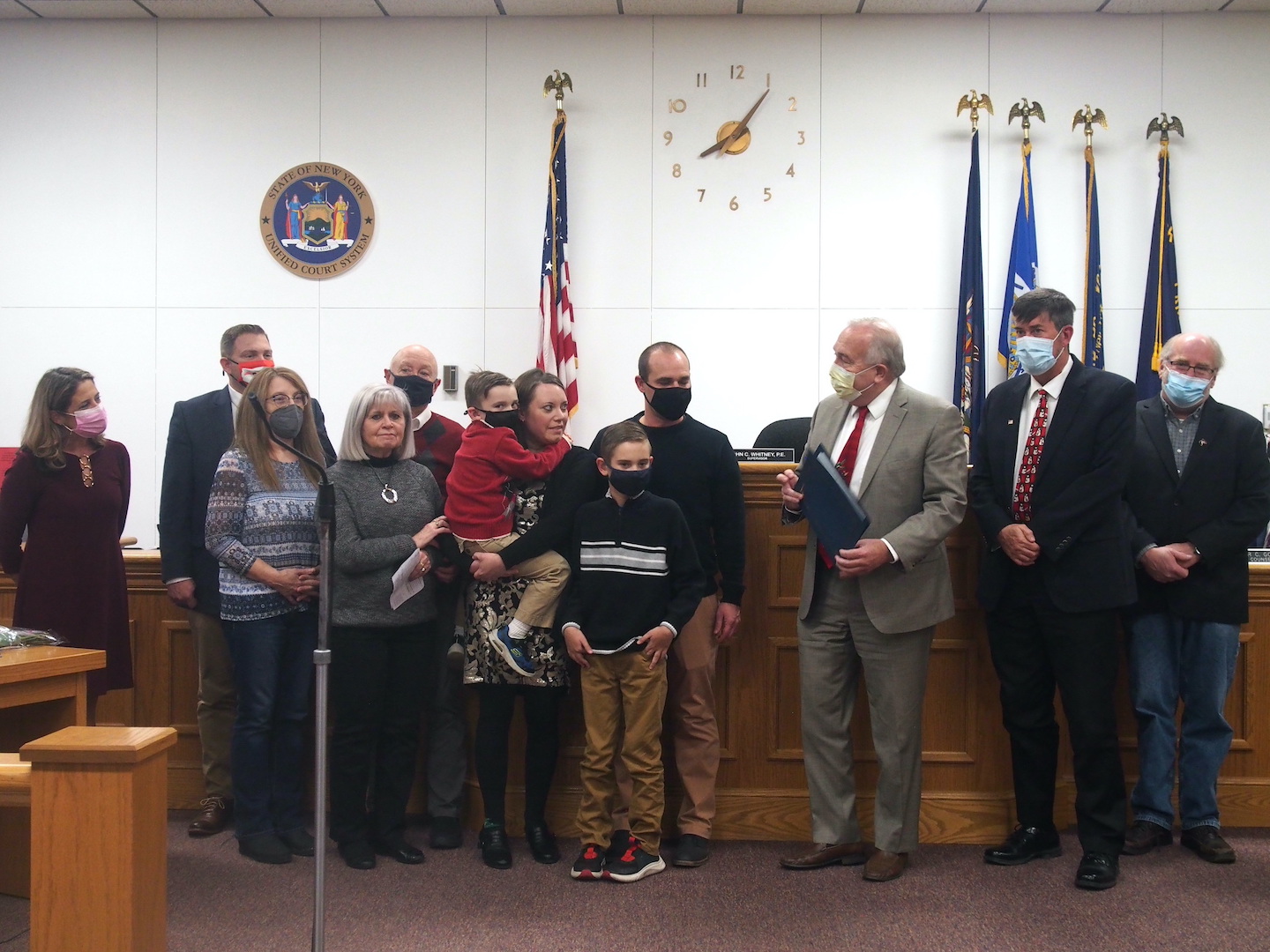 Town Board members, as well as Jenn Baney's family, gather together to present her with a certificate of appreciation for her four years of service in the Grand Island Town Board.

Baney reflects on four years as Town Board member

Early in 2018, shortly after Jenn Baney was inaugurated as a new member of the Grand Island Town Board, she decided to put her efforts into modernizing the security systems in town buildings. That effort would take four years.

“Two months into my first year, I proposed to the board that we really begin to look at our antiquated safety and security systems throughout the town and try to come up to a speed where the school district and private businesses are at,” Baney said.

“I’m happy to report now that, as I am exiting, stage one of the plan is in place, with materials ordered and installation of some new systems going in. I’m also working with (Councilman) Tom Digati to outline multiyear plans so that all town buildings will have the necessary safety and security upgrades so that we can feel that our employees are protected and safe,” Baney said. “Our buildings at different levels will be monitored, more secure. We collaborated closely, forming a committee of both elected officials and town employees, to employ or to add to our current protocols equipment and systems that keep everyone safe and monitored and buildings monitored. For every resident coming in and for every employee working in the town, they can feel safe.”

These safety and security improvements include upgrades to cameras and access to buildings, said Baney, who was honored Monday with a town proclamation at her last meeting as an elected representative.

Town Supervisor John Whitney said the work Baney did during her four years of “leadership and public service” have “materially and spiritually enriched this community. We just want to say thank you.”

During the public comment period at the end of the Town Board meeting, Highway Superintendent Dick Crawford said, “Jenn, I want to thank you for your four years of dedicated service to our community. It really enriched many, many people here. Your willingness to always listen, respond and deliver was spot on.”

Another project Baney said she was proud of participating in was Grand Island’s recent designation by New York as a climate smart community. She said she worked closely with the New York State Energy Research and Development Authority (NYSERDA) “in pursing clean energy initiatives and doing so much as a community to actually receive the designation.”

Grand Island was the “first small community in Western New York to receive the climate smart community designation,” Baney said. She described it as “a very collaborative project with all of our employees.”

Some of the projects Baney worked on to gain the climate smart community designation included electric vehicle charging stations and the installation of LED street lighting.

Digati said, “Yesterday, when I was headed to work, I went to pull out of my driveway, and there was a bucket truck working on the street light across from my house. The LED lighting project that Jenn was an integral part of is off and running. They did my whole street in a miraculous amount of time.”

Whitney added, “Jenn, it’s been great working with you for the last two years. The projects that you’ve been involved with take so much time and so much effort. You throw in 100% every time. As Tom indicated, our street lights are all being converted to LED streetlights. National Grid got out of the streetlight business and dumped that on Grand Island. Clean energy community designation has been handed to Grand Island. Jenn was very instrumental in that. And there are others that are too numerous to mention. My hat’s off to you. I applaud your efforts. Thank you for your service.”

Baney said that serving as a member of the Town Board has offered her a chance to grow as a person.

“The opportunity to serve as an elected official is an opportunity not afforded to many, and the privilege has not been lost on me,” she said. “My term was unique. Many ask me if I wish that I had been able to serve during easier times. I worked my first two years as a member of a highly contentious board, and my second two years were in the middle of a pandemic. So, the glamour and the fun were simply not there most days. Much of it had no guidebook, as it was new. But I would not trade these four years, as I do not know any other way. The character of finding experiences that come from a term like this are really a gift. And while it may have not been enjoyable to others, service to others is not a mistake. So, to the residents, you have been my singular focus this term, even when things were shaky or challenging. I endeavored to always do what was wise and right. I hope that I represented you very well.”

The challenges have helped Baney grow as a Town Board member and as a human, she said. Baney noted criticism has helped her become stronger as a person: “As humans, we can just dismiss criticism, but we can glean the positive when someone is saying something negative about you and truly listen to what they’re saying and possibly admit to being wrong, but consider their perspective, even if they’re saying it in a really angry way.”

During the time in the Town Board meeting reserved for council members to make comments, Baney observed that, when she leaves office, there will be no women on the five-person board for the first time since 1994, when Mary Cooke joined as a board member and, later, as town supervisor.

Baney said she would encourage women and young people to get involved in the town government, as members of committees and advisory boards, as well as running for public office: “I think that the more diversity you can have, the better in terms of representing Grand Island. It really comes down to women being able to make the sacrifice, which can be harder for them, balancing work and family needs, and also the parties connecting with and having a willingness to endorse women for the positions.”

Councilman Pete Marston acknowledged that difficulty of balancing work and family needs, telling Baney, “I want to thank you for your four years of service. Not just you, but I also know your family. I know the sacrifice that they go through to allow you to do what you do. It’s a lot of work. There’s no way it doesn’t come home with you. I’m sure the boys are excited to see a bit more of mom. Good luck to all of you in your future endeavors.”

Baney said she is looking into a variety of opportunities for the future: “I am fortunate, at 41, to have met my career goals. I was able to spend a decade teaching (in elementary school) before the children were born. I was able to spend a number of years raising them when they were very young. I’ve really been able to serve my community in a very public way and impactfully, in a way that most people never have the chance to. So, in this next season, I’m actually looking to step back a little and possibly work in a field that comes with a little less notoriety. I have a real passion still for the field of education, so one thing that I’m planning on working on part time is in the arena of higher ed; and then I’m currently pursuing a position in an entirely different field, definitely more in a supportive role. I’m past the stage of needing accolades and recognition. I just want to be serving those around me in some way that benefits others, without so much attention.”

“I would just say that I am incredibly thankful for the opportunity,” Baney said. “The Islanders took a chance in electing someone who didn’t grow up here. Someone they may not have known. I hope that I didn’t let them down, that them taking a risk on me was one that they feel was worth it. I’m incredibly grateful for this chance to serve them, and I hope that they feel that it was worth the risk of electing me.”

Councilman-elect Christian Bahleda commented to Baney, “I’ll be replacing you, and I want to say thank you very much for taking the time to help get me up to speed. I’ll do my best to follow in your footsteps.”

On Dec. 17, town employees were spotted installing a "Go Bills" sign in Veterans Park, easily visible on Bedell Road. Apparently, the sign worked, as the Bills defeated the Carolina Panthers by the score of 31-14.