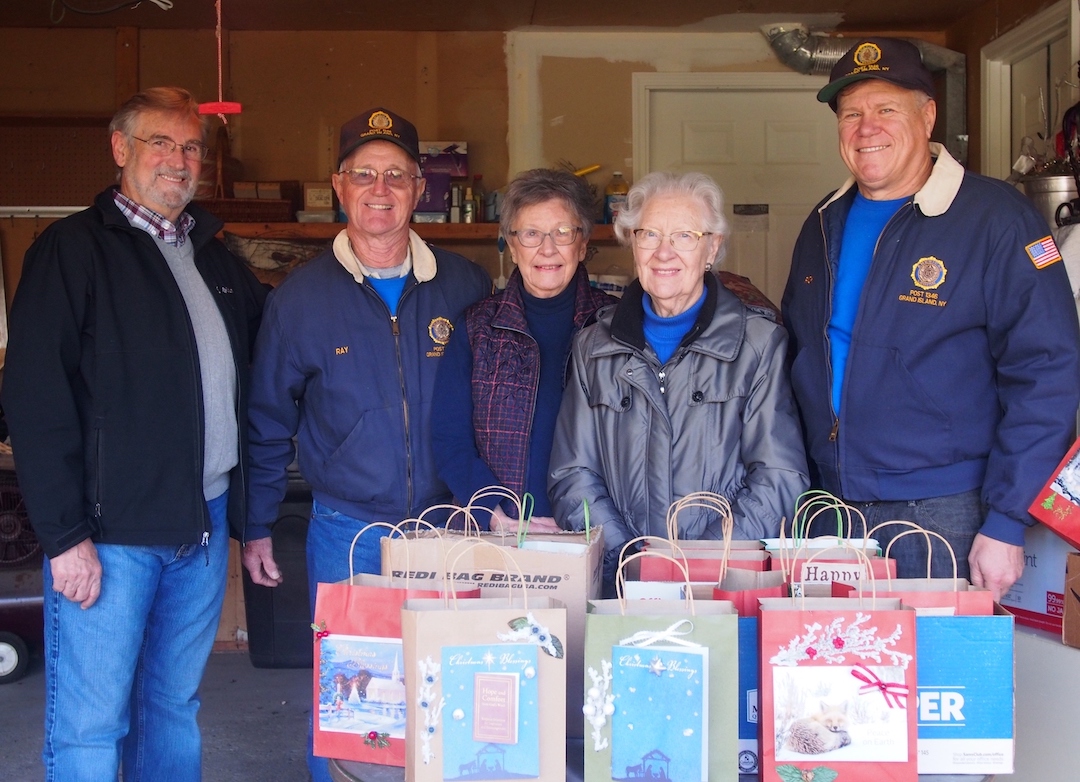 From left, Jim Sharpe, Ray DeGlopper, Pat Shaw, Sheila Colan and Rick Bonarek with some of the holiday gift bags to be donated to veterans at VA Hospital.

At the age of 18, Jim Sharpe was serving in the military in Panama. He had joined the Air Force in 1966, and, far from home and family for the first time during the holiday season, he experienced the kindness of strangers.

Sharpe discovered a support system awaited him in Panama, made up of American civilians who were working in the Panama Canal Zone. He said those civilians “reached out and actually invited me to Thanksgiving dinners and Christmas things and so on. The feeling was, ‘Wow,’ this is more like being home. It’s more like somebody who is like me, somebody who is like my folks, actually connecting with me.”

Sharpe, who is now a member of Grand Island’s American Legion Post 1346, said the connection he felt with civilians in the Panama Canal Zone is exactly what he hopes veterans at the VA Hospital in Buffalo feel with Grand Island’s American Legion post, as well as with members of Trinity United Methodist Church’s United Methodist Women. On Dec. 17, 50 gift bags were delivered to VA Hospital for men who are hospitalized there.

According to American Legion member Rick Bonarek, “These are care packages that the ladies assembled that contain shampoo, deodorant and toothbrushes for veterans at the VA Hospital.”

The supplies are purchased by the United Methodist Women with funds raised from Grand Islanders by the American Legion. In addition to the supplies, a note handwritten by Ray DeGlopper is taped to each bag.

“It is a personal touch,” Sharpe said. “That they take the time to go and get the ingredients that go into these baskets is, to me, just beyond the call. But then to add a touch from Ray, to turn around and have a card saying, ‘Hey, we know where you are, and we’re out here, and we want to support you.’ That, to me, is really heartwarming.”

“The money that Ray’s group gives us is the money that we use to buy what we need for the men,” said Pat Shaw, a member of United Methodist Women. “And, if we need more, we always have it because we do for the ladies, as well. So, we do 50 bags, four times a year: Christmas, early spring, around the fourth of July, and fall, which we try to tie in with Christmas. A lot of times, they (the veterans) will call and say, ‘We need four or five bags. Can you help us out?’ We will throw four or five bags together and send them down.”

Sharpe said, “I’m here to celebrate these ladies. Their work is just phenomenal. I almost want to be a patient in that hospital because I would love to have one of those baskets. It’s just off the charts for me. Being overseas and having folks like these who reached out to me to help me or support me in an emotional way was just phenomenal. I see the same feeling from the people who are going to receive these. They are going to have that same feeling of like, ‘Wow, somebody cares about what my situation is.’ ”

Bonarek said, “I feel overwhelmed. I’m so proud of what the ladies from the church did and that we’re giving to these deserving veterans. Like Jim says, I wish that I were a patient there, to be given one of these bags. And they get great care at the hospital. This just adds a special warm touch to get these bags. Look at how they’re decorated! That somebody actually cares about them.”

Gift bags are also offered to homeless veterans, Shaw said. “They started giving out some to the veterans who are homeless. They can’t hold it together when one of the nurses hands them a bag, and they say, ‘Do I have to share this with somebody? This is all mine?’ ”

DeGlopper said he would tell the veterans in the VA Hospital, “Get well. I really think what these ladies are doing for these veterans down there is just super wonderful. They (the bags) look so nice. It’s like what Rick said, I’d like to be down there to receive one. These ladies do a nice thing, a wonderful thing.”

Shaw said that donations for veterans are collected at a large bin at Trinity United Methodist Church. “We house that at one of the girls’ houses and, when we need it, we just go and get it.”

Sheila Colan, who helped to deliver the bags to the VA Hospital, said about the veterans, “I feel like their mom. I had brothers and sisters in the war. They were vets, you would call them. I am sure that these men really appreciate what they get.”