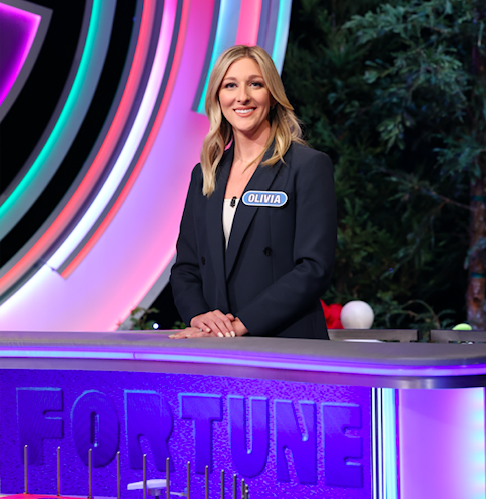 Nothing puzzling about Niagara University grad's appearance on 'Wheel of Fortune'

When Olivia Bitetti completed her internship with NFP 10 years ago, the first word of her performance review was “genius.” As in, this communicator is putting forth next-level work that is, in fact, genius.

That acumen was on display Tuesday night, for more than 7.5 million people, as Bitetti – now married and Olivia Breen – put forth a strong showing on the top-rated, nationally syndicated “Wheel of Fortune.”

After landing on “Bankrupt” twice in the first spin-the-wheel round, Breen fought hard to take the second puzzle, which was “Action Figure Of Speech” ($2,700 and the “Wild Card”).

“You made that exciting,” host Pat Sajak said.

Despite her early success, Breen found herself in third place, following contestant Rob’s big “Prize Puzzle”-winning round. She rebounded well, taking the first and third “Triple Toss Up” puzzles (“Commas And Periods,” $2,000; “Apostrophes,” $2,000).

In the end, Breen successfully solved five puzzles to finish in second place with a total of $9,700. As this is “Secret Santa Holiday Giveaway Week,” she also won $9,700 for viewer William L.

Breen, 31, grew up watching “Wheel of Fortune.” But sentimental value notwithstanding, “I'm a copywriter. Anything that has to do with words and competition, I'm so there!”

She added, “I've always been a game show person. So, it was really exciting to finally be able to be a contestant.”

Family and friends got a kick out of Breen’s TV time, too.

“We had a watch party here, which was a lot of fun – but it was also crazy to be on the West Coast, because I had people watching at 4 p.m. my time; 4:30 my time; and then, finally, we got to watch it at 7:30. That was fun,” she said. “There were watch parties in Syracuse (her hometown), Saratoga; there was Florida, Charlotte. People are just so excited.”

Upon graduating with a communication studies degree from Niagara University, Breen first worked as a New York City-based writer, editor and content creator. She quickly landed placements in The Huffington Post, at various blogs and with Estée Lauder.

Breen is now working in California. Her recent credits include freelance copywriter at IGK Hair and senior copywriter at JLo Beauty (yup, that Jennifer Lopez). Her website, https://www.oliviarosebreen.com/, lists impressive work samples from myriad outlets, as well as professional copywriting services she provides for new and existing clients.

NFP chatted with Breen about her “Wheel” world experience. An edited Q&A follows. 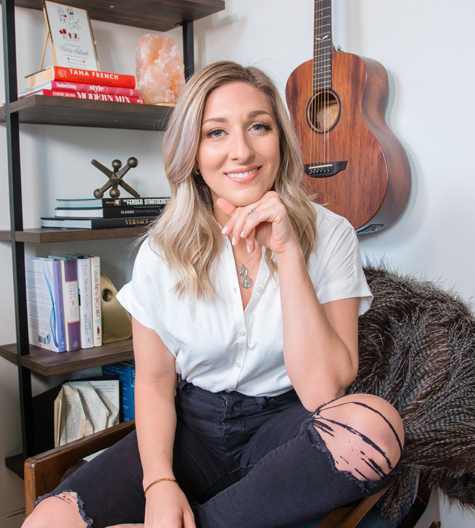 Olivia (Bitetti) Breen is a professional copywriter who has worked with several national brands. (Submitted photos)

Q: Tell me about the application process.

Olivia Breen: That was interesting. It's different because of COVID. The application process is virtual now. So, PSA: Everyone should apply now and try, because it's never been easier to get on the show.

It's virtual, and what you do is you send in a video telling “Wheel” why you love the show, and why you want to be on. Super quick. Just be authentic. Mine was like 15 seconds. And I got an email back within a couple of weeks, letting me know that I got picked to move on to the virtual tryouts.

The virtual tryouts are on Zoom, and you basically get linked up with three or four other people, and you play “Wheel” live on Zoom. You basically get like six minutes to solve as many puzzles as you can – and you just kind of have fun and see what happens.

And then I waited for a while. I got that email with the subject line, “ ‘Wheel of Fortune’ tape date,” and I was over the moon.

Q: I interview people on television, and one of the things I ask them about is what it's like to film an episode on a particular date – especially if it's a cliffhanger or something like that – and then to have to sit on that information for weeks and weeks and weeks until it airs. So, similarly for you: When did you film the episode? We saw it (Tuesday), but when did you actually film it?

OB: I think it was Oct. 10. The weirdest part of this, Josh, no one was allowed to come with me. So, Patrick, my husband, couldn't even come. He was the only person I was allowed to tell. And he couldn’t come in during taping. It's not even like my parents could have known early.

You know, once upon a time, I think you could bring like four people. So they would obviously know what happened. But I truly walked out of there and was the only person who knew.

That was bizarre – and I'm also not the best secret keeper – but I was so excited to watch people's reactions when they watched for the first time, that that helped me keep the secret. 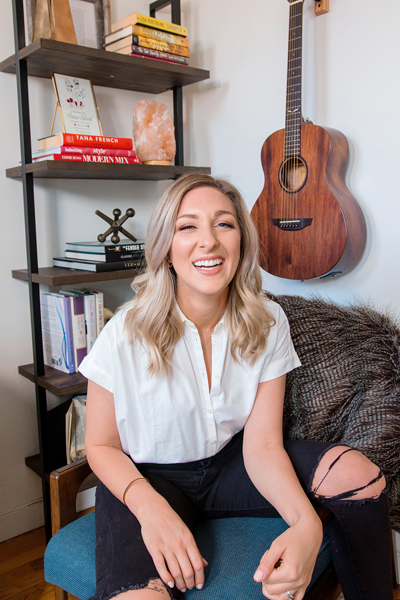 Q: So, you go there and, like you said, you can't bring friends or family. Tell me about the experience day of. Are you basically playing in front of a camera crew? Is there anybody in the audience?

OB: It was weird. First of all, Sony (“Wheel’s” production studio) is like top-tier COVID protocols. And I'm not just saying that – they haven't shut down once. They are very, very, very careful. So, the experience was the best that it could be, I think, with all the precautions in place.

It was just us, the players. They tape five to six episodes a day, depending on if they're doing a Sunday show. And there's three people per episode, so it's 15; and then three alternates, so there's 18 of us. Plus, obviously, the camera crew. Plus, the producers, which are incredible. They hang out with you all day long. They hype you up. I mean, they do this every day, and they're high energy from sunup to sundown. So, God bless producers.

It's kind of like adult summer camp. Despite the circumstances, like being masked and distancing, we all became friends – because everyone's just so excited and so nervous. And also, you don't know anyone; so, you just immediately latch onto each other. I actually walked away with a couple of friends. We keep in touch. One of them's local, so we might hang out.

The players are the audience. So, the cool thing is, is that it is so intimate. You know these people's stories throughout the day just from chatting and being on break. When that player is up there, you're like, “Yeah, Joe. Way to go!” You're excited for him and his family, because you know all about his life, where he lives, etc.

It was different not having a huge studio audience, I'm sure. But there was a little bit of relief that it wasn't so big of a production. Maybe why I seemed so calm!

Q: That, of course, would be the next question. What does it feel like to be on the stage, at the wheel, seeing Pat and Vanna, preparing to solve these puzzles?

OB: It's really surreal. Seeing it in person, seeing the set, is so crazy. I mean, you've pictured it on TV, but it looks so different with the lights and the sound, all the mics and the people. It’s very cool and overwhelming, and you realize just how big of a deal it is, when you're standing there waiting.

And the other thing, too, is this is a game show. They can't legally stop the clock. So, you're rolling. You can't say, “Wait, let me say that over again! Hold on, wait, can I do that one more time?” It's like no; they press play, and Pat and Vanna come out, and it's go-time for 22 minutes. They do not stop.

Q: Did you go in with a particular strategy? I saw you calling some vowels – you know, people kind of go back and forth about whether they should buy vowels or not buy vowels. Was there a certain game plan that you wanted to employ?

OB: My strategy was buy vowels, so I'm glad that you noticed (laughs).

Pat’s biggest tip is buy vowels. There's only five of them, so you have a one in five chance of at least getting something in the puzzle. And then what happens is it'll help you call smarter consonants, based on the vowels. There’s a three-letter word and it starts with an “A,” it's probably “And.” Then you can call your “N” and your “D,” and keep moving your way through the puzzle.

That was definitely my biggest strategy. That and don't pass out.

Q: How cool was it that they had the Disney theme – particularly with you, as you said, coming from a big Disney family?

OB: It was really cool. I mean, everyone there was a big Disney fan. When you fill out your form, there are certain things that you can pick. It's like you have certain shows that you want to be on – like the college show and whatever. I must have picked Disney. I am a Disney fan, but it was even cooler than I thought it would be.

The set was unreal, that they turned this around in a day. It was very, very cool. But it was also cool because the rest of the adults were Disney adults. Everyone was extra excited to be there, because they're winning prizes that had to do with Disney; and the vibes were just fun.

Q: What can you say about Pat and Vanna? I don't know if you had any other opportunity to chat with them beyond what we saw on air. What was your experience with them like?

OB: Oh my god, I honestly think they are two of the most professional and authentic people. They do this so often, and they've been doing it for so long. They were friendly. They really cared. They were out there.

And Pat, I mean, his wit is really that quick.

It's very amazing to watch them work. They're professionals, but also super natural. It's fun to watch them together, and also live in front of you.

For those interested, the game show’s publicity team shared, “It’s never been easier to audition to become a contestant. ‘Wheel of Fortune’ fans can submit applications at https://www.wheeloffortune.com/join/be-a-contestant for a chance to be invited to a virtual audition. There, potential contestants can show off their puzzle-solving skills and potentially be selected to appear as a contestant on the show from the comfort of their own homes. If selected to be on the show, everyone goes home with a minimum of $1,000.” 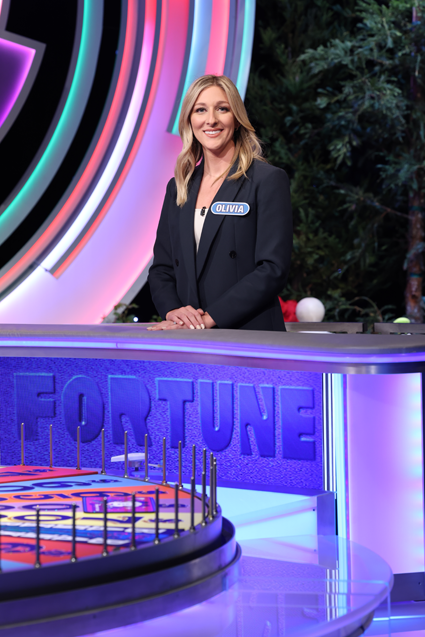