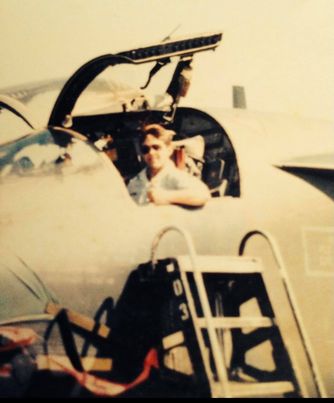 Jerry Marsala said he joined the U.S. Air Force in 1984 under the delayed enlistment program. He left for boot camp in March of 1985.

“I almost joined the Army, but backed out last second to join the USAF,” he said. “I joined the military because I didn’t have the funds for college. I was looking for training in the area of electrical engineering and options to take college courses.”

He said that being in the Air Force taught him about teamwork: “I learned how to work with and become friends with people from different parts of the country.”

Marsala said that, when he was in boot camp, he was very fast at performing the physical exercises.

“We had our final PT test and I was fast,” he said. “Everyone had me picked to beating the squadron record. There was one guy who was not physical enough to pass. He came to me the night before and he was scared he wasn’t going to make it. I said, ‘Don’t worry, we will do it together.’ I gave up the record to stay with him and help him pass the physical test.”

Once Marsala finished boot camp, he was trained to work in radar bomb scoring.

“We were a radar unit that trained bomber pilots,” he said. “My job was to pretend I was a ground antiaircraft artillery threat and try to shoot down our planes. This was all done electronically. We only worked with them via radar. They would fly their routes, and we would play simulated warfare. They would practice their ability, fly into a hostile environment, and hit their targets. My job was to try and shoot them down. This was all done electronically.”

He was able to meet some of the pilots that he worked with, as well as to “check out the planes.”

“That was a treat,” Marsala said. He noted the thing that most impressed him about the pilots was “their demeanor. Pilots are a special breed of human. They cannot make mistakes. They all have similar personalities. Very humble and calm.”

Marsala served for two years on active duty and three years as a reservist. After leaving active duty, he joined the Air National Guard in Niagara Falls. He worked in ground communications.

“We took care of all types of communications from two radios to phone lines,” he said.

After Marsala left the military, he said his life changed “a lot.” He obtained a degree in electrical engineering and worked “as an engineer for Fox 29. I then went back to school for education, and I am a technology teacher at Lancaster HS. “When I went in the Air Force, I was a power lifter. I really wanted to make the Air Force team. I continued with competitive powerlifting and then transitioned per to bodybuilding. I won the Mr. Great Lakes title in the late ’80s and began to run my own events under the Natural Muscle Association, which my wife, Jennifer, and I created. Jen is a physical education teacher at Kaegebein Elementary. Before COVID, we have events in five different states.”

When asked what he would tell young people who expressed an interest in joining the military, Marsala said, “Don’t, lol. In all seriousness, there are five branches. Talk to all of them. Find some veterans who have been in them and ask about their experience. Ask lots of questions. If you’re going to do it, look into ROTC. Lastly, make sure you get guaranteed a specific job before you sign.”

Marsala said his military service was a positive experience for him.

“I am very proud to have had the opportunity to serve my country,” he said. “I remember leaving on a plane to Texas and wondering, ‘What the hell did I get myself into?’ I made the best of it. Most of my fun stories didn’t start out with, ‘So, me and the guys went out for a chicken salad on a Friday night.’ ”

Author’s note: I am very grateful to the veterans who shared their stories with me. Thank you for your service in the military and for your continued service in your civilian lives. I hope that you are happy and enjoying life. If you find that you are running into difficulties, please do not hesitate to reach out for help, either by calling the Veterans Crisis Line at 1-800-273-8255 or Crisis Services at 716-834-3131. Both lines are available 24 hours a day.