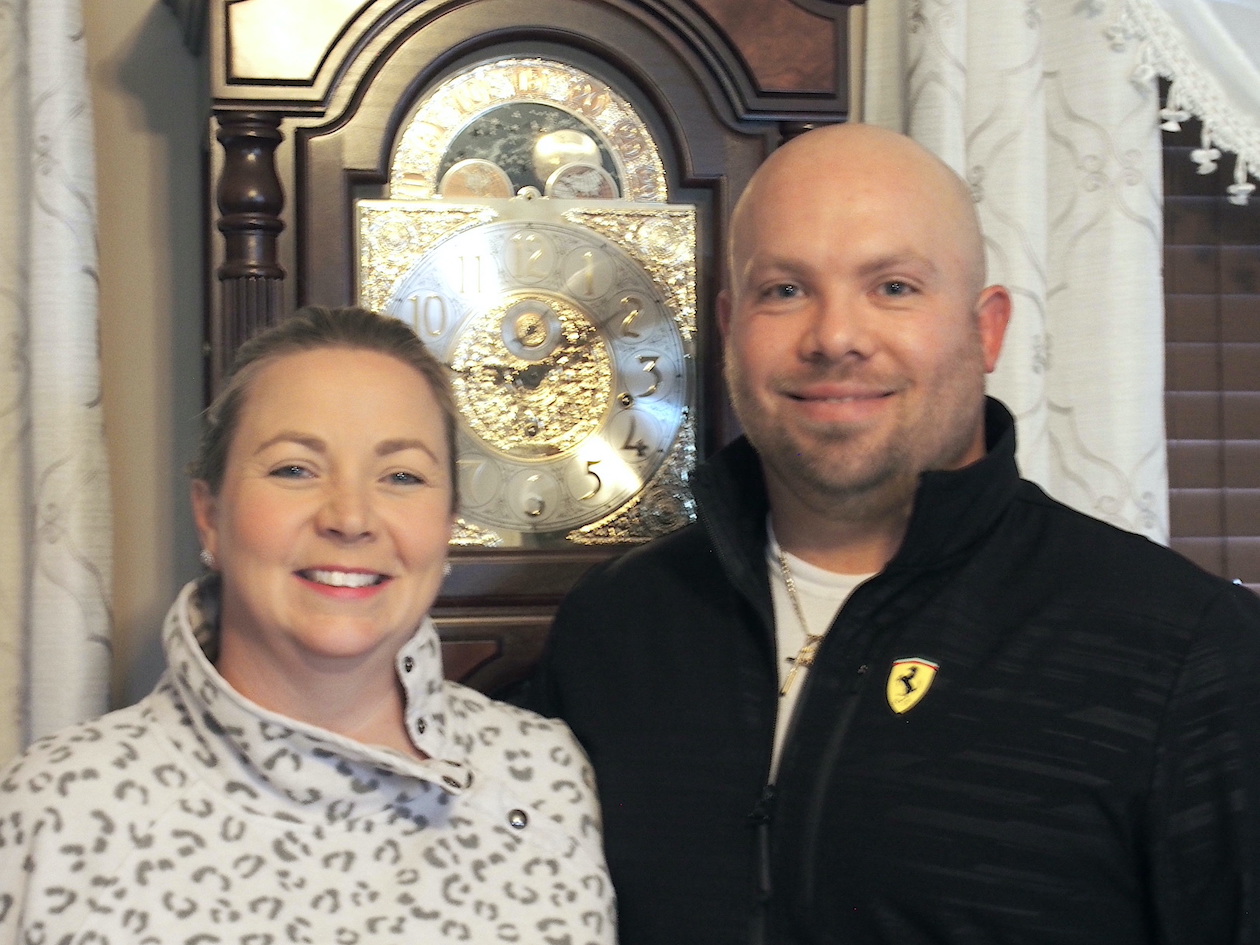 When John Anderson was in ninth grade, he decided to join the Marine Corps.

“Growing up, I just loved playing with ‘G.I. JOES.’ I just loved being physical. I loved the aspect of structure,” Anderson said. Structure appealed to him because, “I didn’t grow up in the greatest household. My dad was in and out of jail with a drug and alcohol problem.”

One night, Anderson’s mother decided to divorce her husband and to leave California, where Anderson had been born, and return to her native Western New York.

Anderson joined the Marine Corps in 2002 as an 11th grader in the delayed entry program.

“I did a year of … you’re called a poolie. It’s basically pretraining,” he said. “You learn about the Marine Corps.; you tell your friends about it. You go to events with your recruiter to get you physically and mentally ready for the challenges of boot camp.”

Just a few days after graduating from Niagara Falls High School, Anderson headed to boot camp. He said that, thanks to his recruiter, he was ready for the experience.

“He went above and beyond just being a recruiter,” Anderson said. “He was a friend. He was like a big brother to me. The biggest thing that he told me was that it was going to be 90% mental, 10% physical. When you get to boot camp, they’re going to try to break you mentally before physically. I would say that, if it weren’t for my recruiter, boot camp would have been very terrifying and very hard, but I actually enjoyed boot camp.”

After boot camp, Anderson was trained to be an assault amphibious vehicle crewman.

“Best way that I can describe it are tanks that float,” he said. “We were used to transport infantry. We would drive them off the back of a ship and do a water-to-land assault, assisting infantry. If you think of D-Day, the ones carrying the soldiers and everything, a little more updated, obviously; bring them from sea to land, which is what we were doing. Also, we had the capability of traveling on land and helping them with combat support.”

Anderson, who served in the Marines for nine years, said he did three tours of duty in Iraq.

“It was a difficult time, especially being young,” he said. “I literally went to boot camp a day and a half after I graduated. You’re 18, 19 years old, and you have the responsibility of making sure that you’re in charge of other people’s lives, depending on what rank or responsibility you have. So, going there and knowing that was a big deal, knowing that we were helping the liberation of Iraq.”

It wasn’t nonstop violence in Iraq, Anderson said, pointing out there weren’t constant “firefights or IEDs going off. … I feel that we made a difference in Iraq. I believe that these people liked us there, more than what would be shown. I know that there’s me, and that there are plenty of others who will tell you the same thing. We probably did more helping and humanitarian service than we did fighting. It wasn’t what you see on the news every day. There was a majority of peacefulness. Most of it was us doing humanitarian service over there. We were building schools, passing out school supplies, having the kids checked out by doctors. Getting the kids health care that they didn’t have or even the grownups. Everyday problems.

“It’s always good to get that story out there, let people know.”

Anderson said his service took him to places other than active war zones. When he was deployed to the islands of Indonesia, in December 2006, disaster struck in the form of an earthquake in the Indian Ocean off the coast of Sumatra Island. That earthquake resulted in a tsunami that devastated Sri Lanka, India, and Thailand with high waves that rolled over coastlines. The tsunami claimed lives in places as far away as South Africa. A total of 230,000 people were killed as a result of the disaster, one of the deadliest disasters in history.

“We provided first aid, humanitarian service. Anything that we could do to help these people,” Anderson said. “To me, they’d never really dealt with Americans, and this was their image of us. To know that I helped another country in a time of need and put a stamp of the American life and how we are, truly what the media doesn’t show, I think will last forever. They will always remember that the United States Marines were there, helping them during this tragedy.”

In 2007, Anderson was injured in an explosion.

“It required me to have some surgeries,” he said. “What happened was that the Marine Corps gave me the option to take my early separation from medical as soon as I was healed or I could finish my contract by doing an administrative nondeployable job. Going back to how my recruiter was, I decided to go on recruiting duty. I had needed guidance. I needed help, because I didn’t have the greatest family structure. I figured if I could make a difference in somebody’s life, that’s one reason I chose to go on recruiting duty.

“Recruiting duty was tougher than deployment. It was very hard, especially in the mid-2000s, with the war. A lot of people were against it. Dealing with parents and trying to explain to them what the Corps is really like. I opened a lot of people’s eyes because they thought that everybody had to go to the infantry, and they realized that it’s a much broader branch.”

New challenges awaited Anderson after he left the Marine Corps.

“The first year was hard,” he said. “It was a very hard transition, going from a very structured military life to a civilian life, so it was a lot of transitioning and counseling and learning about the civilian life. The only thing that I knew in my adult life was the military. So, that first year, my wife and I struggled to find a job, to get our feet on the ground and running. But, once we did, it opened up a lot of doors having a military background.”

Anderson, who now lives on Grand Island with his family, recently left a job at Oxy Chemical Corp., which is going out of business. He started working at Linde Praxair this week.

“I’ll be their central control room technician,” he said. “I’ll be watching several plants around the United States for Praxair and Linde, and I will be doing ASU (air separation units), watching a bunch of monitors, trends, making sure the equipment is operating properly.”

He said his military experience has helped him in civilian work. Although his military job didn’t translate into a civilian job, other things did help him, including “leadership principles, work ethics, attitude, willingness, everything they teach you. Don’t quit. Don’t give up. Actually helped more than having a job experience because, with that, employers could see that I was willing to work, willing to be accountable, have the ability to learn new positions with ease and still be profitable for them.”

Anderson said he is very grateful to everyone who has served or is serving in the military.

“You guys are an amazing group of people,” he said. “You will forever hold a spot in my heart. It doesn’t matter if I served with you or not. You deciding to do something that is bigger than yourself shows a lot of character in who you are. No matter what, you’ll always have a friend. Don’t be afraid. It’s one big issue I had coming out (of the military). Losing all of those friends and being all alone, but realizing that there is more there than you could ever imagine. Always keep your head up. Thank you to those who are not with us anymore. See you eventually.”

When asked what he would tell a young person who is thinking of joining the military, Anderson said, “I would tell them that it’s one of the greatest things that they could do. We joke around about the big brother big sister. We pick on each other for choosing different branches. Whichever one you decide to go into will change your life forever. It will be the greatest decision you make. You’ll make the greatest friends. It will open up doors. You will see more and learn more than you could ever imagine.”

Author’s note: I am very grateful to the veterans who shared their stories with me. Thank you for your service in the military and for your continued service in your civilian lives. I hope that you are happy and enjoying life. If you find that you are running into difficulties, please do not hesitate to reach out for help, either by calling the Veterans Crisis Line at 1-800-273-8255 or Crisis Services at 716-834-3131. Both lines are available 24 hours a day.