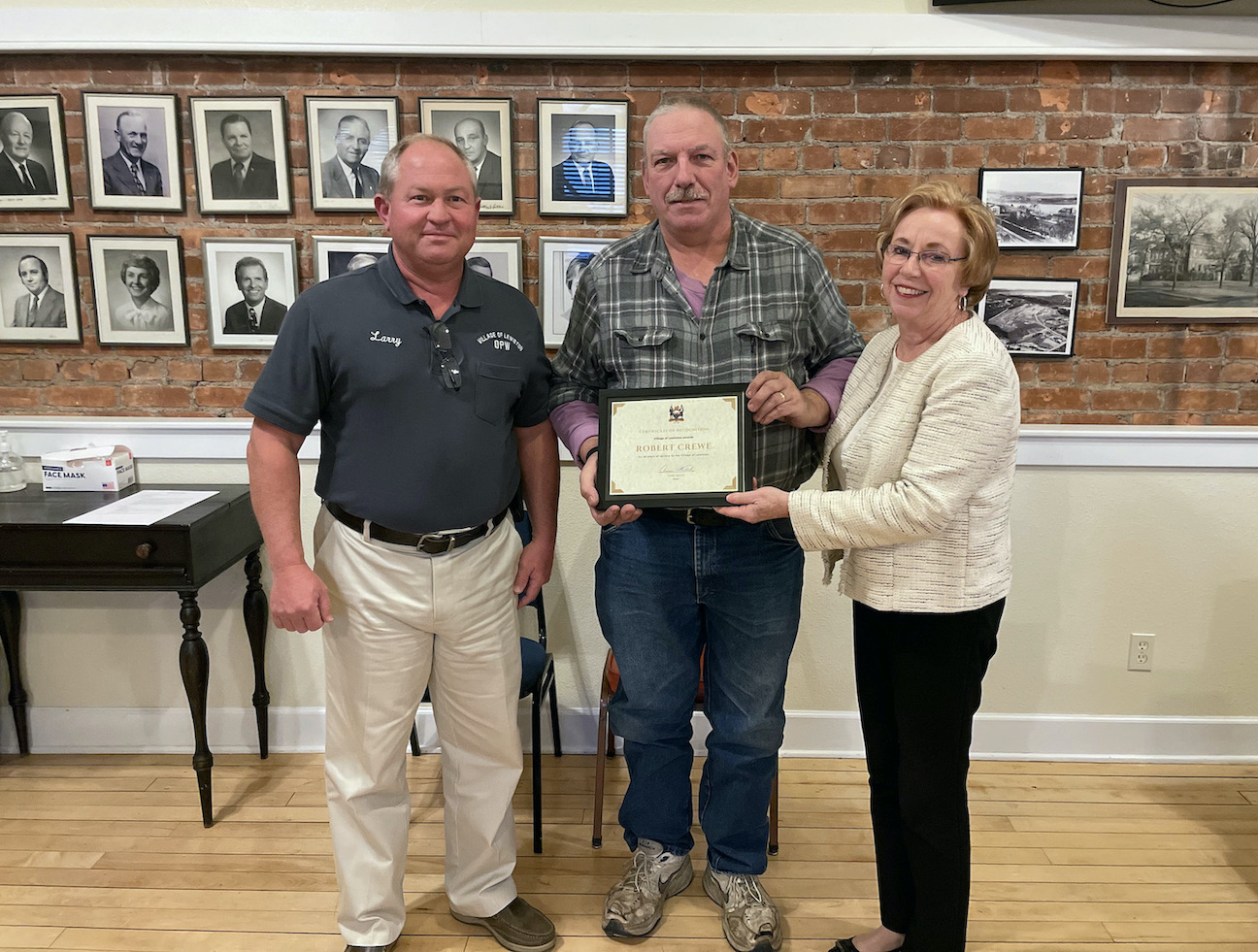 Pictured, from left: Department of Public Works Superintendent Larry Wills, Robert Crewe and Mayor Anne Welch. Crewe was recognized for 30 years of service to the village.

Water rate likely to increase in Village of Lewiston

Mayor reminds residents to contact office if removing a tree

Trustees in the Village of Lewiston are considering a water rate increase after hearing from accountant Pat Brown of Brown & Company.

The rate was recently raised 5 cents (1.4%) – to $3.75 per 100 cubic feet of usage – as part of the 2021-22 adopted budget. It went into effect with the July 1 billing. But that’s “not adequate to meet the funds’ expenditures,” Brown wrote in an Oct. 27 letter to Mayor Anne Welch and board members. He reiterated that at a meeting Monday.

“Water rates just are not sufficient right now, at the level they’re at,” Brown said.

In his letter, Brown wrote, “The water fund expenses have increased on average about $14,000 per year from 2018-2021 primarily due to Niagara County Water District’s ad valorem tax which has increased about 8.2% the past two years or 4.1% per year on average with the largest increase being 5.9% from 2019 to 2020. The village has no control over the county water district ad valorem assessment but this is the largest expense in the water fund.

The annual ad valorem tax comes after the village approves its fiscal year budget. This year, the fee was $170,000.

Brown said villages are not eligible to join the Niagara County Water District.

He wrote, “Like anyone, I don’t take rate increases of any kind or any amount lightly; but to quantify the increase and new rate of $3.95, the average user would pay an additional $16 per year or $4 per quarter. An extremely high user of water, such as a non-residential user, would pay an annual $80-$90 per year or $20-$22.50 per quarter.”

Deputy Mayor Vic Eydt said the board will have to “bite the bullet” and vote to approve another water rate increase. “What else can we do? I don’t like it, but everybody has got to pay their fair share of it.”

Trustee Dan Gibson said, “We don’t have much choice.”

A public hearing on the proposed water rate increase will take place at the start of the 6 p.m. monthly meeting on Monday, Nov. 15, at the Red Brick Municipal Building.

If the increase is approved, the combined water and sewer rate total would $8.74 per 100 cubic feet of consumption, which Brown wrote “remains well below neighboring villages.”

Department of Public Works Superintendent Larry Wills said his team has fixed three “major” water leaks in the past six months, which will curtail usage.

Eydt asked what the penalty is for removing a tree on the village right-of-way, noting he had recently come across removal remains.

He was told, per local law No. 1 of 2018, the fine for taking down a village tree without board approval is $1,000 and/or three times the tree’s value.

“It was a nice tree; it was a good-sized tree,” Eydt said. He called it “a beautiful tree.”

Eydt added, “My thing is this: If they want to cut it down, and they ask us and get permission, that’s one thing. But to just drive by and the tree is gone. …”

Mayor Anne Welch said, “Unfortunately, I think people think that their front yard is their front yard. They don’t realize that the village (right-of-way) goes into their yard.”

She added, “If (residents) do have a tree close to their line, it could be a village tree. They need to have permission if they need to cut it down, regardless of the problem.

“If it’s a village tree and it has a problem, the village takes it down – so, it would save them the cost of the tree.”

Trustee Nick Conde said the practice of arbitrarily removing a tree “needs to be deterred.”

Department of Public Works employee Robert Crewe was recognized for his service to the village. Welch presented him with a certificate of appreciation.

“That sounds good. I appreciate it; I really do,” Crewe said.

Welch said, “It’s been a pleasure to work with you – and I know what a hard-worker you are. The guys love you; they love working with you. You’re very important to that crew.”

Eydt added, “Bob, for me personally, I think you’ve done a fantastic job for this village.”

He added, “You’re in the shop. You’re not out on the street. A lot of times people don’t see you. They don’t see you’re the behind-the-scenes guy. Without you, it ain’t getting done.”

His father, Howard, also worked for the DPW.