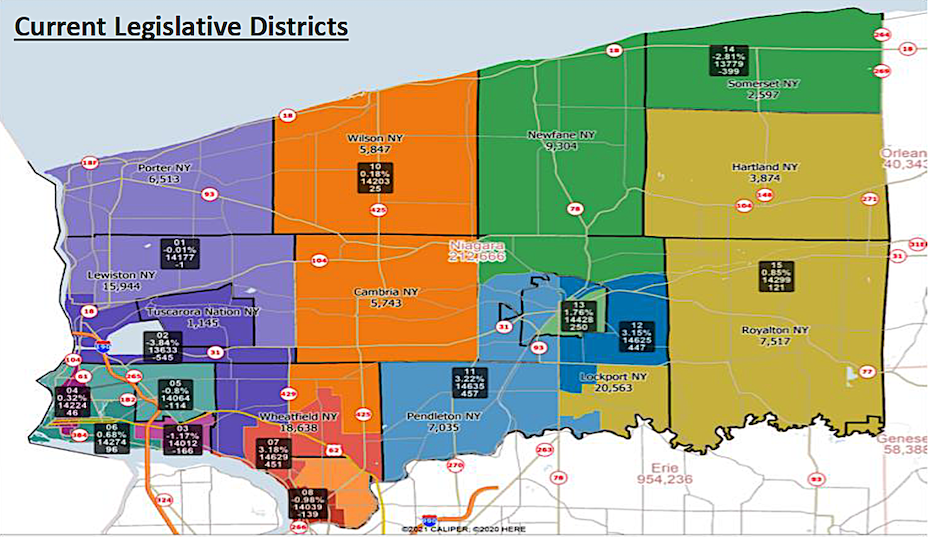 Redistricting is underway in Niagara County.

Coming off the federal government’s latest nationwide census count of the past decade, state and local officials have begun the process of getting the area’s legislative districts adjusted from changes in population counts.

The Niagara County Redistricting Commission, appointed by the Niagara County Legislature, is now reviewing 2020 census data toward developing a plan to adjust district numbers as needed. This week, the commission members – comprised of Steve Brady, Jason Cafarella, Mary Ann Cassamento, Lauren Masse and Bradley Rowles – released a proposed map for the county’s 15 legislative districts based on the new 2020 census data.

The commission also announced two public hearings for the public to comment on the plan before it is forwarded to the Niagara County Legislature.

This comes off news that Niagara County, unlike Buffalo and Erie County, has seen yet another population loss over the past decade. 2020 U.S. Census numbers show the county’s population count at 212,666 residents – a drop of 3,803 from 2010.

According to the numbers:

•District 2, which includes southern Lewiston, the Tuscarora Nation and parts of the Town of Niagara, saw the greatest loss, down 545 residents, or 3.8%, for a total of 13,633.

•Nearby District 1, which includes northern Lewiston, the Town of Porter and Village of Youngstown, saw a drop of one resident, down to 14,177.

As a result of the losses, the Redistricting Commission has proposed changes that will see certain county residents assigned to new districts, rather than a wholesale realignment.

“After a review of the data, (the) committee agreed unanimously to achieve compliance with the fewest changes possible,” its report said.

Brady, who is chairman of the commission, said, “The five members of the commission reviewed the initial census data and unanimously decided that, given the relative stability in population across the county and the fact the current legislative map was unanimously adopted by the Legislature 10 years ago, our focus would be to bring districts into compliance with a minimal amount of disruption to the current district map. The map we are proposing would make no changes to 10 of the districts and only slight population adjustments to the other five.”

The commission will hold two public hearings next week where members will present the map, explain the redistricting process and accept public comments. Hearings will be held at 6 p.m. Tuesday in the Niagara Falls City Hall Council Chambers at 745 Main St.; and 6 p.m. Wednesday in the Legislative Chambers, Niagara County Courthouse, 175 Hawley St., Lockport.

“I think it’s important for the public to understand the different parameters we have to work under to ensure the redistricting map is constitutional and how that impacts our suggested district lines,” Brady said. “I look forward to their comments.”

The maps and other redistricting information can be found at https://tinyurl.com/8ybs4v8c.