River Lea, the Grand Island Historical Society’s museum in Beaver Island State Park, has reopened for visits. The museum’s doors were closed to the public shortly after the society’s meeting on March 5, 2020.

The museum was open for tours on Sept. 19. The opening of the building gave visitors the opportunity to see the changes that had taken place while the building was closed to the public. According to Grand Island Historical Society President Curt Nestark, visitors will see that rooms in River Lea have been decorated with themes in mind.

The dining room is “all about the Bedells and the Bedell House,” he said. “Inside there, you’ll find all kinds of documents and pictures. There is the hotel register from 1901 and 1902. Also included in the hotel register is Alma Hoff, who was Zora Hussey’s older sister. There are presidential documents and the invitation for Ossian Bedell to have lunch with President James McKinley.”

The theme of the kitchen is farming on Grand Island, Nestark said. Exhibits include “documents of the farms of Grand Island, photographs, tools, milk bottles, and the chart used by the Milk Alliance while they were here.”

The theme of the dining room in River Lea is the Bedell House and the Bedell family.

Nestark described the parlor as a “work in progress.” He explained that each corner of the room was dedicated to different themes, including Grand Island’s clubs, smoking, the Pierce farm, and the drawings of artist Amos Sangster, a self-taught artist who was known in the 19th century as the “painter of the Niagara Frontier.” Nestark described the Sangster corner as another work in progress: “Amos Sangster was a friend of Grover Cleveland. He dedicated his book to Cleveland. He made drawings and etchings of Lake Erie to Lake Ontario and the falls. He only did two Grand Island ones, and we own both of those, the original drawings, as well as one etching. I’m negotiating for another etching of Tonawanda Island.”

Nestark explained the smoking theme in the parlor: “Smoking was a big cultural thing for years and years.” A cabinet in the corner holds “an interesting smoking display. Some Grand Island pieces are in there, too.”

“There are many people to thank for the changes in River Lea, which including hiring Shamrock Painting Co. to paint several rooms, floors and hallways in the house,” Nestark said. The renovations represented “a lot of work by a lot of people who are dedicated to this building and to what this society represents. They put the time and effort in, and they spent the money wisely. And also, we had two meetings with senior parks officials, and they love what we are doing. They love that we are spending our own money, making improvements on the place, and reinventing the museum.” 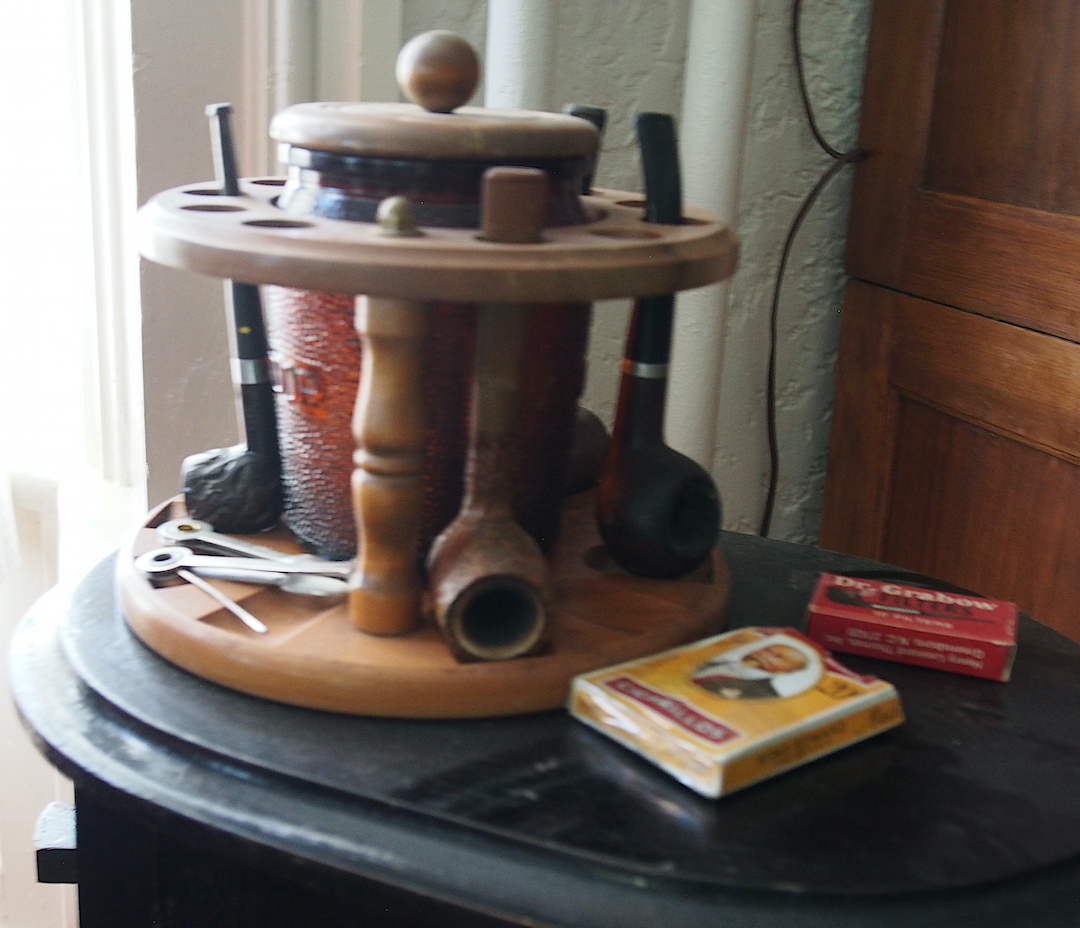 This table in the corner of the parlor at River Lea, with its collection of pipes, represents a time of Island history when smoking was considered to be an integral part of the culture of the community, according to Grand Island Historical President Curt Nestark.

Upcoming events at River Lea include an open house, scheduled for 2-4 p.m. Oct. 17, as well as three Christmas open houses, scheduled for Dec. 3-5. In addition, Grand Island Historical Society meetings are resuming, with the next meeting set for Oct. 7.

“Because of the uncertainties and what we don’t know about COVID,” that meeting will be for members only, Nestark said.

The November meeting will be held at the Golden Age Center on the Nike base, and it will be open to the public. In addition, no Christmas luncheons are scheduled for this year.

Future goals for River Lea include putting the society’s library into a digital format “so that it can be shared,” Nestark said. Other goals are to build a bathroom on the first floor and to work on the entranceway, to make it more accessible to people with disabilities.

“And we want to continue to work with State Parks,” Nestark said.