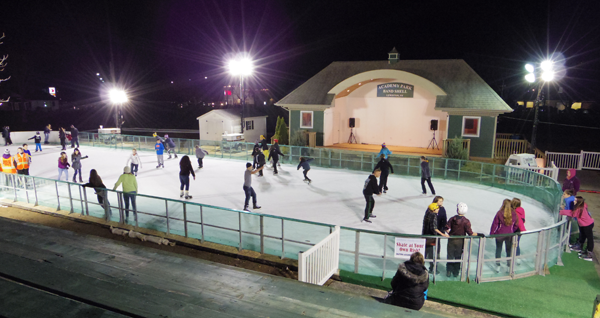 The Lewiston Family Ice Rink will return to Academy Park this winter, just in time for the holidays.

Village trustees approved a request from their counterparts in the Town of Lewiston at Monday’s monthly municipal meeting. They did so with two conditions: That rink materials be removed in a timely manner after the season, and a more detailed plan be presented for future years of operation.

Though Village Board members have spoken favorably of the ice rink, they’ve also expressed displeasure over its impact to the Academy Park field – namely, that it produces large pockets of water and turns grass to mud, which takes weeks to fix.

“I like the ice rink. … But our problem in the past – if we go ahead with this – is that we have to have a commitment,” Deputy Mayor Vic Eydt said. “We get so much feedback from people after you guys shut it down and then it sits there for like two, three months. People go, ‘What is going on? How come it’s still sitting there?’ And then we’ve got to deal with it (repairing the ground) in the spring.”

Town of Lewiston Parks & Recreation Director Mike Dashineau said the latest the rink has remained in the park is February – but he noted, “The groundwork takes a little bit more.”

The rink was last used in 2019. It was not expected to return to the village – let alone Academy Park.

“We took it out of our budget last year,” Mayor Anne Welch said. She added, “Obviously, we weren’t thinking you were coming back this year.”

That road will remain, for now, with ice rink operations resuming.

Dashineau said, “We weren’t really sure if we were going to have this project at all. It was … a surprise last week when the town instructed me to come and try to achieve your permission here to do that.”

He said the ice rink itself is self-contained and water exits directly into attached drainage. Rather, Dashineau noted, it’s disruption of the ground – people walking in and out of the warming tent, but mostly Mother Nature – that impacts the park. Snow mushes up the grass, and icing results in delays moving equipment. 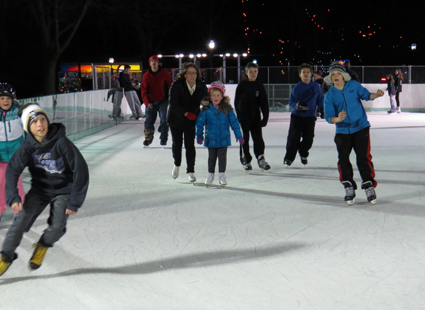 Should ice rink operations continue in Academy Park beyond this year, Trustee Nick Conde said the preferred location is at South Ninth and Cayuga streets – “the southeast corner, where the Boy Scouts manage their (Christmas) trees.” This would allow larger mechanical components to be placed on the concrete parking spaces.

For 2021, however, “The issue we have with that is as far as the timing goes,” Dashineau said. “We have infrastructure that’s going to the original site,” which was in between the bleachers (since demolished) and bandshell (since relocated). That’s where electrical and water connections exist. “Without the infrastructure, you’re looking at putting in more money, more time, more effort going to a new location.

“We’re not opposed to a new location long-term – I think the town’s been perfectly clear saying that we’re guests there; wherever you tell us to go long-term, we’re willing to work with you, if you choose to do the ice rink.”

For now, Dashineau said, “Power and water at that location is essential.”

“We’d like to just put it back just for ease of use; to put it where it was” last, he said. “Then next year, we can look to move it. If that’s where you guys would prefer it, we’ll certainly move it wherever it needs to be.

“Just with the time and putting everything in together, we just feel that’s the easiest to get through this winter. Next winter we can move forward.”

With the bleachers gone and the Alphonso DiMino Memorial Bandshell moved, Eydt said he expected it would be easier to move rink materials in and out of the park. Wills agreed. “They’ve got more room to work,” he said.

Trustees have said their long-term goal is to install a permanent concrete pad, a pavilion or splash pad in Academy Park that could accommodate both ice rink operations and warmer-weather events and social gatherings.

“We need to look at something other than this ice rink with the chiller and big tent,” Welch said. “It makes a mess of the park every single year.”

She added, “We’re trying to make that park really beautiful; and the mess every spring is tough.”

The Lewiston Family Ice Rink is set to open Nov. 19.