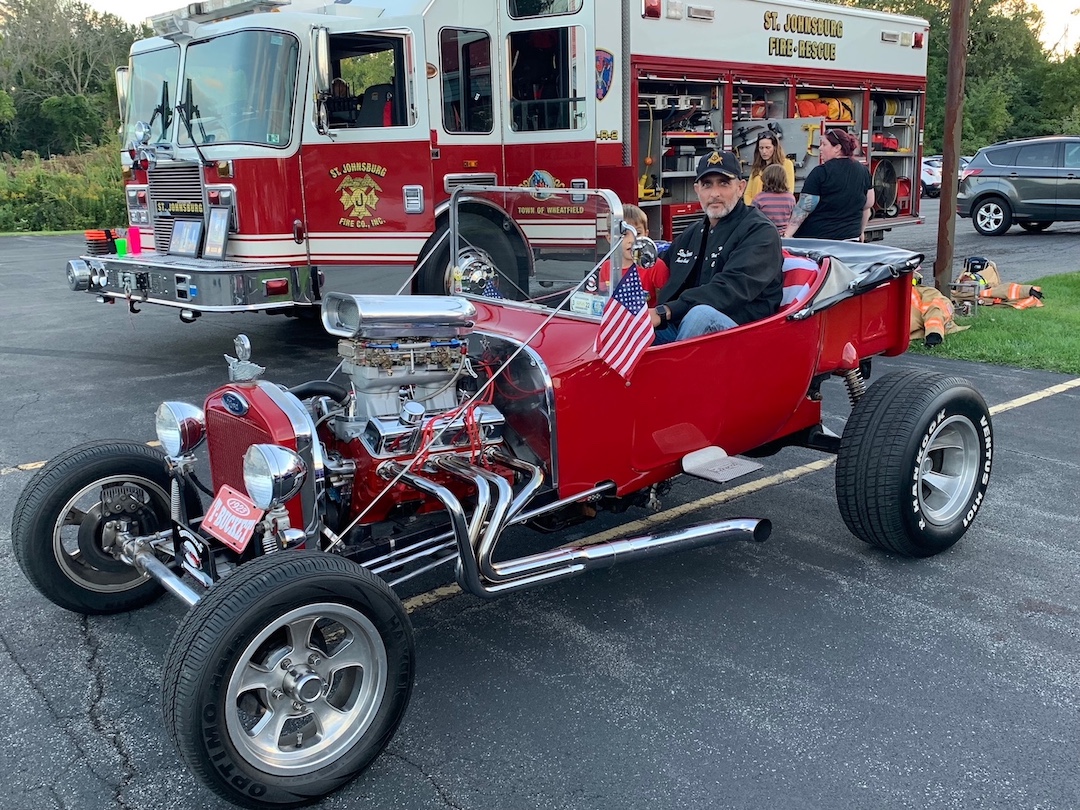 Steve Barnes, owner of the nonprofit WNY Hot Rods Customs and Classics, gets ready to pull out in his T-Bucket with his son.

Beyond the mirrored chrome, gleaming parts and shining body of a classic car, there’s an engine that pushes it.

At a recent classics car show at the Frontier Firehall on Liberty Drive in Wheatfield, run by WNY Hot Rods Customs and Classics, it was discovered this gathering of gleaming exteriors was, and has been, the brain child of Steve Barnes, owner of the nonprofit organization.

His idea started generally in mid-2020, as a response to what he saw as difficulties for other nonprofits to raise funds in the heights of the COVID-19 pandemic. He began to organize, and was at first entirely self-funded.

“I did it myself,” he said. “Because all the car shows were canceled. And people needed help getting money because of COVID. So, I wanted to help as much as I could. I was like, ‘Well, what am I going to do?’

“We’ll do car parades. Call it ‘Cruising for a Cause.’ We were very successful. We raised over $10,000 in the short four months that we were doing it, for nine charities.”

Fast forward to December, and Barnes decided to take the next steps to expand his outreach to the community, and put more muscle into his philanthropy.

“We became incorporated in December 2020, and now we’re up to almost 60 members already,” he said. “We get money from our dues, our members pay dues every year, so that’s how we started up.”

Now, Barnes has taken his and his memberships’ efforts to a stream of car shows around the Western New York area – all in the name of charity. Current plans through September will be weekly Friday night shows at the JetPort Restaurant on Porter Road in Niagara.

“We were supposed to be (at Summit Mall) until October. But it got shut down due to permit issues,” he said. “So, we’re moving over to the JetPort. We teamed up with Cataract Cruisers, a car club in Niagara Falls. Their car show needed some help, so we came over there and made it big.”

“We were at the Summit Park Mall since July 2020,” Barnes explained. “Very successful events. We had over 200 cars a couple of times. We did music, we showed movies, we had a drive-in movie every Friday night.” 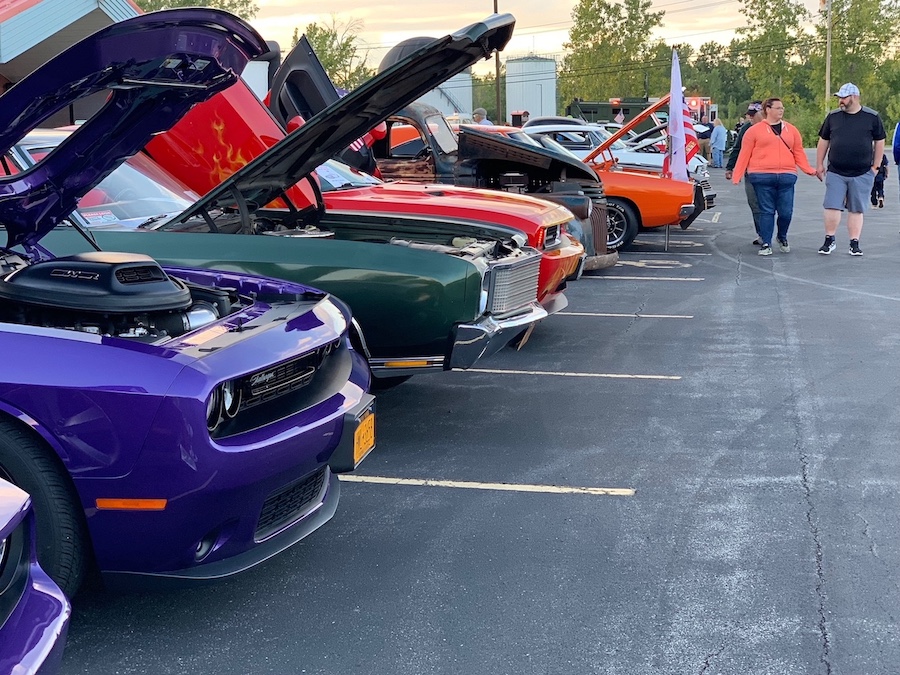 And while those Summit Mall events took advantage of a large space, the loss of the venue has not deterred Barnes and the WNYHRCC from expanding their efforts.

“We’ll go wherever we’re asked to go,” he explained. “Or we’ll find a location if we’re asked to be somewhere and see if we can do a pop-up car show. We do this at different townships, we go around to different locations. Not just Niagara Falls. Anybody that calls us and wants a car show, we try to help them, because they want to get their name out to promote their charity.

“But every Friday night, for now, we’re at the Jetport, till the end of September. Raising money for a different charity every week.”

This past summer, Barnes partnered with the Niagara SPCA for a benefit called “Fast and Furry-ous,” but the event was rained out. Unfortunately, no rain date was able to be set. So, between permit issues and the occasional rain and scheduling road block, one might wonder what drives a person to push forward, find new venues, help more and more charities.

Barnes explained, “I’ve had 16 brain surgeries and four near-fatal infections. And dying, pretty much, made me be reborn. I realized my life purpose. My whole life I knew I had to help people, but I had no means to do it. And with all my medical problems, it gave me an opportunity to come back, be reborn, and do everything for charity.”

So far this year, the organization helped several charities with its car shows. Barnes identified four local charities as current primary beneficiaries of WNYHRCC events: Niagara SPCA; Frontier Volunteer Fire Co.; USS Sullivans for their hull repair; and Heaven on Earth Horse and Pug Rescue, which was “severely impacted by COVID,” he noted.

Yet no matter the charity, Barnes was clear about the fact that it’s not a one-man show.

“I was blessed with financial ability to be able to start it, and so that’s what I do. A lot of people who do the same thing joined me, and they want to help,” he said. “It’s a good feeling to give back and do good things. I wish everybody in the world would do it. We don’t take any money; we give it all. Whatever we raise, every week, is donated.”

And what is raised comes from the public, primarily. Individuals or organizations can find out how on the WNYHRCC’s public Facebook page, where they can also find out details about where the car shows will be happening on a weekly, sometimes daily basis.

The large Summit Mall shows had also carried sponsorship from Halleen’s Automotive, which helped Barnes have such a variety of attractions at those events.

“Without them, we wouldn’t have been able to do it,” Barnes said.

“We’re trying to make the world a better place,” he added, “One car show at a time.” 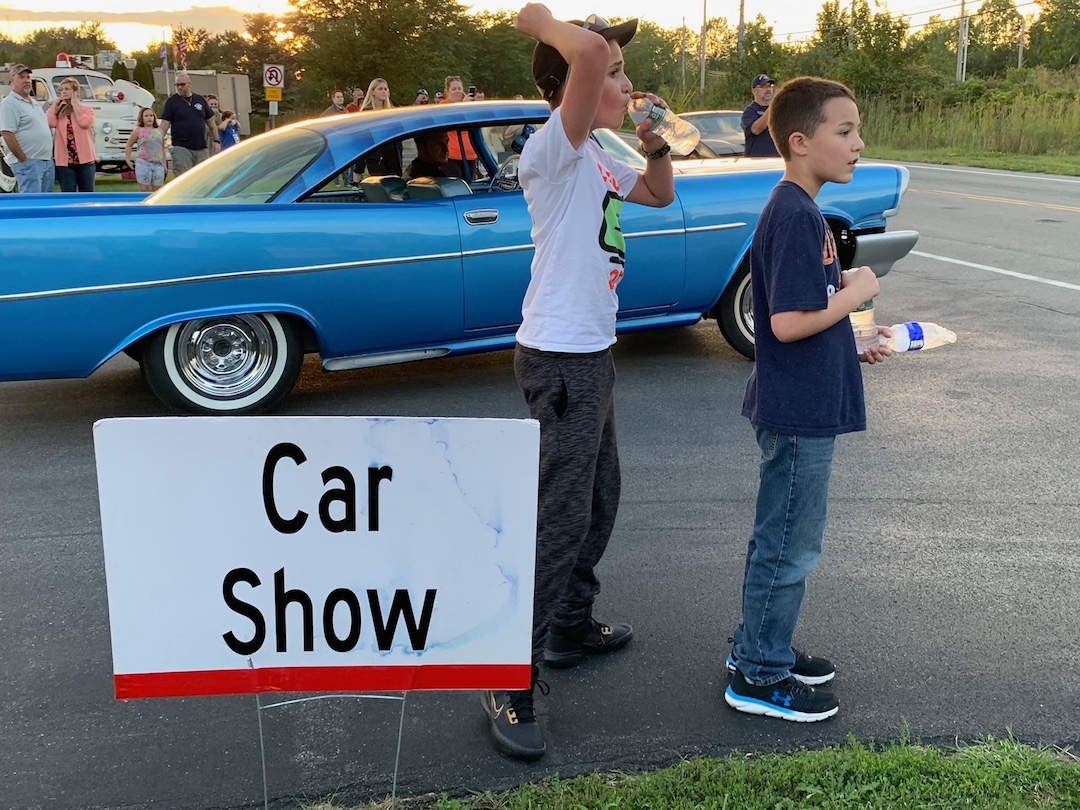 A couple of young onlookers watch in fascination as the parade of classic hot rods start revving their engines.