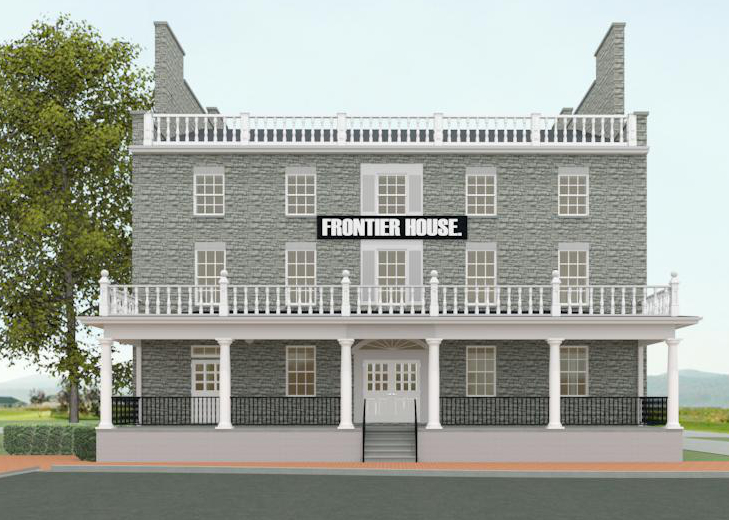 Pictured is artist Chris Nenstiel's rendering of the proposed new look at the Frontier House in Lewiston. (Image provided by Fittante Architecture)

Bed and breakfast, reuse of rathskeller eyed for Frontier House

On Wednesday, architect Jim Fittante and Village of Lewiston Mayor Anne Welch said Ellicott Development and the Frontier House ownership team is still awaiting approval from the New York State Historic Preservation Office (SHPO) before the bulk of restoration efforts can commence. They indicated a third project scope submission is under review.

“The main driver is Ellicott Development, and they have their whole team that has been great with everything they've been doing, working with my drawings,” Fittante said. “They have a team, actually, for preservation, too, that’s submitting everything to SHPO. … And it's just going back and forth.

“SHPO is very thorough when it comes to historical buildings that are on the National Registry – and especially when we're trying to restore this all. Interior; I mean, it's down to pieces of trim, saving it inside. And then there's the big issues of the type of mortar’s got to match. This thing's been repaired, temporarily, in the past with wrong mortar. That's caused more problems. That hasn't helped the building. But then they come down to everything within, like I said, interior trim; the full window package is going to have to match original windows – which there's not one original window in this place. They were all replaced back in like the ’70s with OK-style windows, but SHPO’s always looking to save this building for another 200 years. They want it to be around.

“Ellicott Development and their team, along with myself, we're trying to make this get repaired proper to meet all the historical guidelines. It is a chore.”

Instead of looking to modernize the Frontier House or diminish its historical value – which could’ve resulted in a faster reopening process – “It's been great to have such a developer on board with restoring this to what it needs to be restored to,” Fittante said of Ellicott Development and its CEO, Bill Paladino.

He noted, “The stuff we're doing now is, hopefully, in 200 years, there's another story on the preservation of this building.”

Ellicott Development Director of Development Thomas Fox said it’s a matter of putting together “a strong application” “based on our experience in working with the national standards for historic preservation – how we need to approach different things as we come in here, go through this adaptive reuse process. A lot of it has to do with the extra time and design to get to that point for interior and exterior work.

“Now that we’re submitted to SHPO officially, I think that we're anticipating a pretty smooth and then hopefully pretty rapid process with the approvals. We’re probably at least 60 days out from any sort of blessing from those reviewing groups – again, the state office and the federal office. But as we kind of go through that process and wait on those approvals, we're continuing work on our construction documents.

“Certainly, what we submit to SHPO is a little bit sometimes less in detail to what you'd have with a full construction set of documents. We’re continuing to work with Jim on that to get the rest of the documents ready, so once we do get to a point of time in which we do have the necessary approvals, in terms of tax credits and the adaptive reuse for the structure, we'll be able to submit for a building permit and get into that process so we can get closer to a definitive start date.” 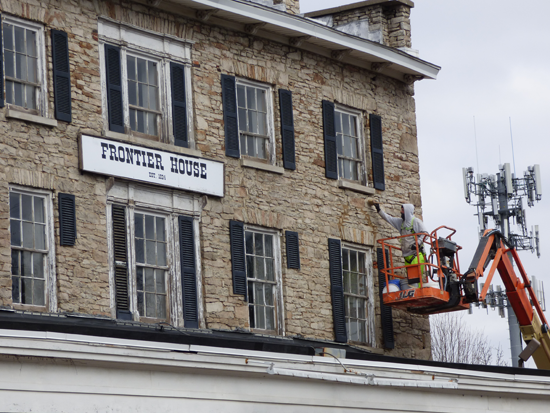 Beyond that, Welch said, “They can't really do anything big, other than kind of clean it up and kind of repair the outside.”

The mayor explained she is comfortable Ellicott Development and the Frontier House ownership team are actively doing what they can to advance the project to its next stage of renovation.

“Yes. And you know what, I know it's been a long wait – it's been the longest wait for me. I mean, I thought, once we sold this, everything was gonna be great. … Well, then COVID hit. And that shut everything down,” she said. “He’s trying to rebound from that. … (But) it's not as easy as ‘Oh, yeah, I'm just gonna come down and start working on the Frontier House.’ ”

Welch pointed out there are businesses in Lewiston that haven’t been able to open because owners can’t find sufficient workers.

“People have to realize that we're still in COVID. And, you know, it's still hard catching up” with materials and laborers still in short supply, she said.

Fox said, “The design, and getting the design right, and making the submission, has really taken a backseat to just lack of clarity on coming out of a pandemic and making sure that we're going to be able to rehab the property. You know, find the right contractors, and at costs that are needed in order to see it be a successful transformation.

“Certainly, anybody looking at it inside and out can probably guess – whether or not they have experience in what we do – that it is going to be a costly endeavor to be able to bring that building back to life in its condition, being upwards of 200 years old. It’s a lot of attention to different areas, which adds to our timeline, certainly, with the construction.

“But I think there's a little more clarity now. Obviously, things are looking up in terms of the pandemic, and now we've reached this point in time in which we are officially submitted for those approvals that we need. Any surprises aside, I think we should probably, by later this year, see a lot more activity on site. And then hope for some time next year, summer/fall, that we’ll be operational there.”

Fox said Ellicott Development is “absolutely” committed to seeing the Frontier House renovation project through to its completion.

“I think our portfolio speaks volumes that we take pride in what we do,” he said. “We have a great amount of experience in adaptive reuse of historic buildings. It's a specialized sort of niche for development and, on top of our experience and our will to make it a great space and a great, newly activated space for the village, it's also something that, when we develop something, we hold and we maintain it indefinitely. We're not looking to build space out and finish a project and sell it off and move on. We look to build a quality product – a product that's going to last and be something that we can be proud of and add to, again, our repertoire of successful historic adaptive reuse projects that we've done.”

Welch said, “I wish I could say, ‘Yup, you know what? They’re starting Monday.’ But I can't. (But) like I say, I'm grateful that (Paladino) bought the building to begin with. Unfortunately, COVID has had a lot to do with it. Going through the state takes longer. But I think, when the project is finally finished and done, I think people will really be happy about it. He builds beautiful buildings, so I don't have a worry about that. It's just finally getting enough workers and materials and financing to really do it, and keep doing it until it's done.”

Outside and Inside Expectations

In May, Fittante presented the Village of Lewiston a rendering of what a refurbished Frontier House could look like – specifically referencing a historic picture of the building that’s part of the Orrin E. Dunlap Collection at the Niagara Falls Public Library. He said the exterior of the 197-year-old building would resemble what residents saw in the Frontier House’s early days in 1824.

At that meeting, the plan called for a total of 10 dwelling spaces spread across the second, third and fourth floors. Fox said there are now 11 units.

“I think we're reserving some flexibility in that end use right now in our minds,” he said. “It's not going to affect the physical plans. We can do a longer-term rental on the units, or we can do shorter-term rental – be it a bed and breakfast or something like that. We're still opening the flexibility.

“I think we like the idea – since we got involved with the project – as more of a boutique property or bed and breakfast sort of thing. So, I think that's our main intent. You know, furnish spaces; a nice little lounge space downstairs on the ground floor. That's really what we see.

“Most of the units are going to be smaller in size, more in line with a hospitality unit, a hotel unit, you know, being 200-, 300-, 400-square-feet in size. Physically, I think a lot of them will look like that sort of shorter-term space that a bed and breakfast might offer – be it a studio or a one-bedroom – that sort of thing.

“But we do have a couple of units that are larger – over 1,000 feet; a couple bedrooms, a couple baths – that will maybe lend themselves to a longer-term rental, if there's an interest to do that. We’ve got two full floors plus an attic unit – the fourth floor – a single unit up there. We can always approach it, in the end, as taking a floor as a longer-term rental and one floor as more of a bed and breakfast-type thing, and do a mix of it that way as well.

“I think that's not a decision we see ourselves needing to make yet. But, as we get closer to construction and pushing the project along, we'll be able to identify that official end use.”

On the ground level, “The lounge space that we're dedicating to the residential end or bed and breakfast use would be pretty small,” Fox said. “It's more of like an entrance lounge; a nice furnished area; one of the original fireplaces restored. But really, the majority of the first floor will be dedicated to commercial use – so, be it a retail tenant, or maybe a small restaurant-type tenant or something like that, that could activate the first floor.

“In addition, the basement level … the rathskeller … we're looking to reactivate that space in the basement, too, probably for some sort of a restaurant-type space; restaurant or bar. So, there'll be a lot of activity we see on the first floor, and that basement space, reactivating that as well.

“Again, the lounge area for guests and/or for residents will be pretty minimal. It’s only a couple hundred square-feet of the first floor.”

Fittante, who has worked on several high-profile Lewiston projects, said the Frontier House holds special meaning to him. He has long sought to work on the building he admired as a youth.

“I’m very fortunate, and I thank Ellicott Development for getting me involved in helping out with the drawings and moving forward with this project,” he said.

Fox noted, “It's gonna be great. We're really excited to be able to start getting this going very soon. There's a little more clarity, again, I think now than there was. We're excited to get this one going.” 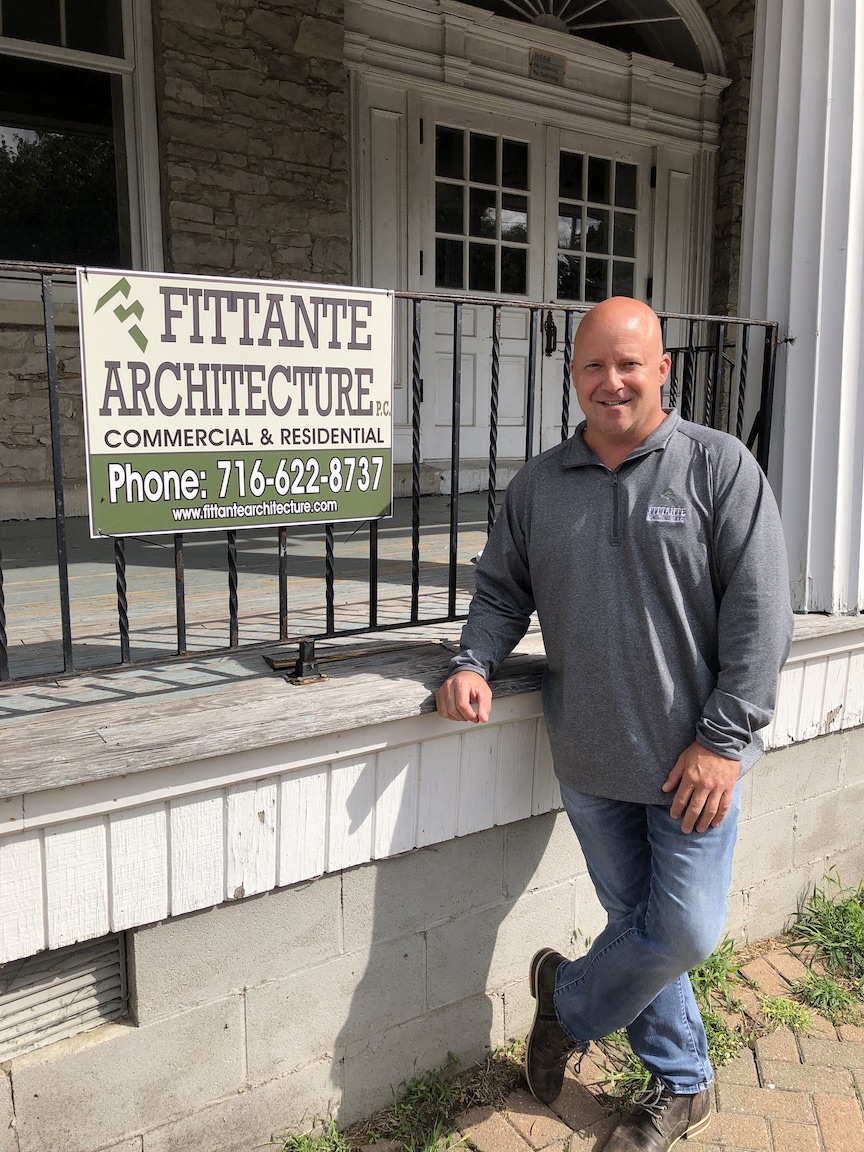 Lewiston architect Jim Fittante is working with Ellicott Development in crafting plans to restore and reopen the Frontier House. The 197-year-old building is listed on the National Register of Historic Buildings. 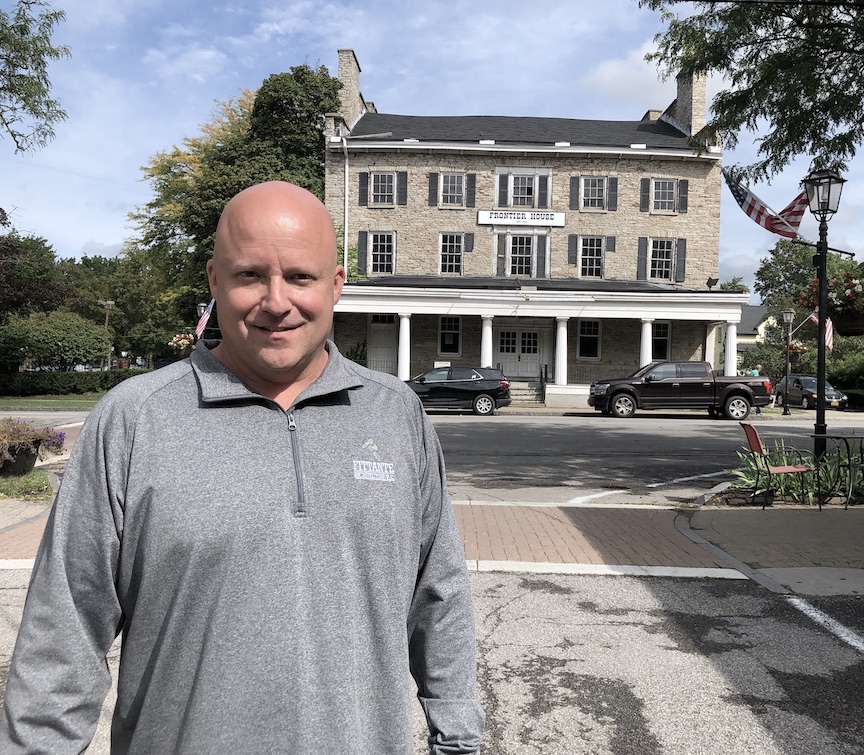