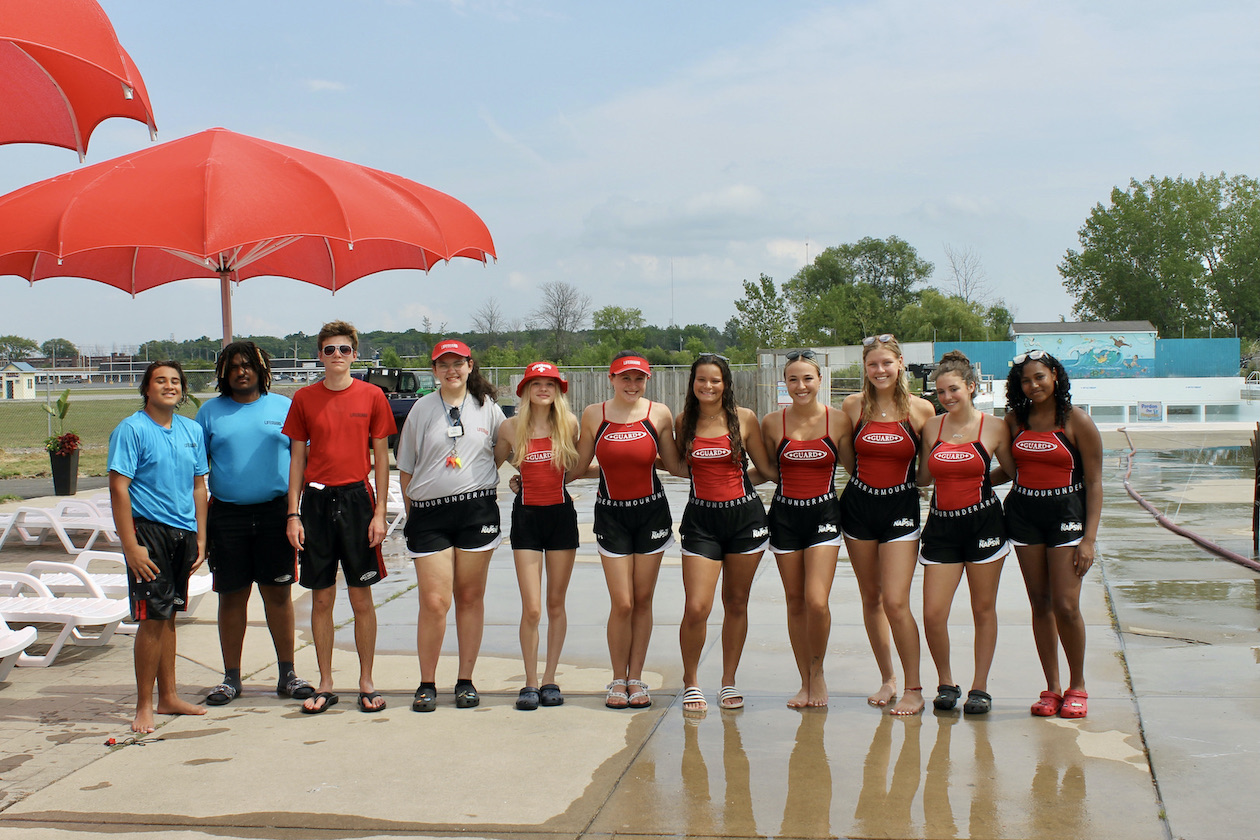 Lifeguards pose for a photo Wednesday in the water park section of Niagara Amusement Park and Splash World, the former Fantasy Island, at 2400 Grand Island Blvd. The water park will open this weekend. (Photo by Karen Carr Keefe)

Niagara Amusement Park and Splash World has the green light to open the water park starting Saturday, with a limited number of its slides and pools passing inspection Thursday morning.

The 75-acre site of the former Fantasy Island amusement park will open from noon to 7 p.m. this Saturday and Sunday, with an update expected soon on its calendar for the remainder of the summer season.

Park spokesman Tom Crisci confirmed the good news that Western New Yorkers fans have been awaiting eagerly since June, when the park gained new management with Gene Staples and his company, IB Parks & Entertainment, under a long-term lease with property owner Store Capital.

“We’re actually looking to open Splash World on Saturday with some limited ride functions on the water park while maintenance still works to bring one or two more rides on the rest of the summer here,” Crisci said. “We’re working on our calendar right now, based on staffing and things of that nature and holiday weekends.”

He said the new announcement covers only this coming weekend for now, but the rest of the operating calendar is expected to be out by Sunday.

“The limited water park options will include the Lazy River, our Dragster Drench, the Cannon Bowl, Surf Hill and Double Dare Falls,” Crisci said. “We rebranded Splash World Café and we’ll have a limited food menu as well.

“We were able to schedule an inspection this morning,” Kane said Thursday.

The Labor Department inspects rides at every amusement park and traveling show located outside of New York City.

The Dispatch visited the park on Wednesday afternoon, when about a dozen lifeguards had just emerged from the water on a 90-degree summer day and posed for a photo near bright red umbrellas and beach chairs.

A young woman who gathered her fellow lifeguards for the photo said no one would be happier than they would to have the park open this summer.

A company website post earlier this month advertises lifeguard positions at $20 per hour with training, including a $2.50-per-hour, end-of-season bonus. A “now hiring” ad also is posted on https://niagaraamusementpark.com. The parent company website is https://ibparks.com. The Facebook page is https://www.facebook.com/splashworldny.

The Splash World opening is planned as the first chapter for the new operator. The full park is supposed to open in spring 2022. Former owner Apex Parks Group had closed the 60-year-old park in February 2020.

•The park announced a special preview ticket price of $14.99, and all parking will be free of charge. Tickets will be available at the gate only. Enter at the south side of the parking lot directly into Splash World water park.