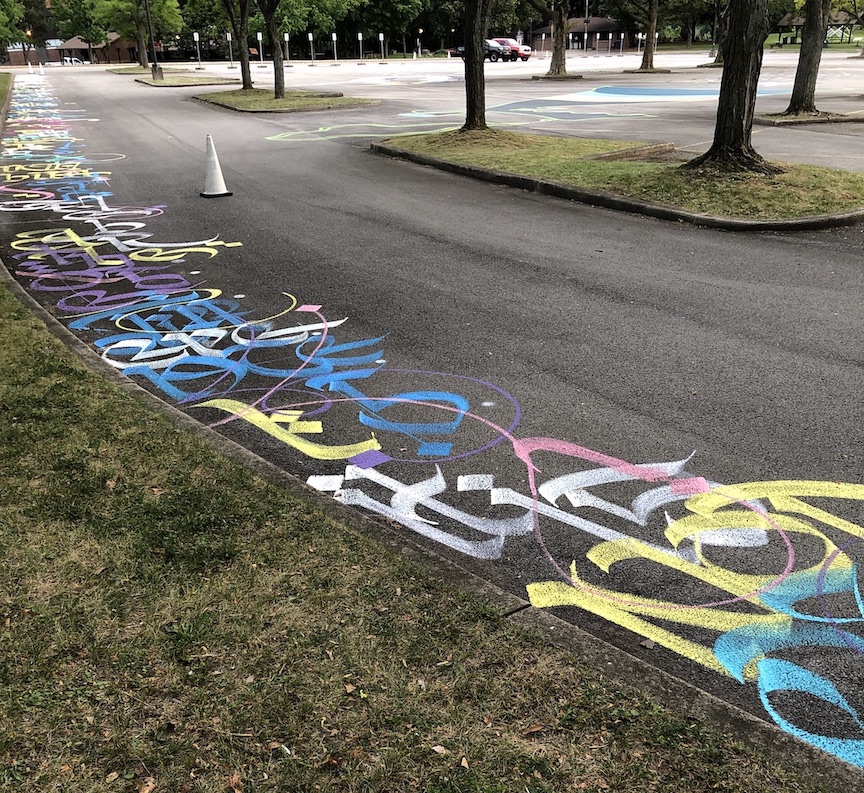 Shown is a portion of Muhammad Z. Zaman's new mural inside Artpark State Park. Trustees said they like this art and were impressed with its creator.

Trustees in the Village of Lewiston were recently presented a revised proposal from Artpark & Company for a wayfinding mural on South Fourth Street. This one, titled “Unity in Diversity,” is expected to be smaller in nature than the concept presented last month and not approved by the board.

A mural “sidewalk” was recently created along the interior of the main Artpark State Park car lot. The venue staff has been looking for a way to extend artwork out onto Fourth Street to forge a visible connection with the village.

“When we last met, we didn’t have a lot of information on the project,” Mayor Anne Welch said. “Since then, I walked down to see what the artist (Muhammad Z. Zaman) was doing – I think other trustees went down to see it as well. I was surprised, because I thought we were going to have that full (design) painted on the sidewalk. He explained that it would just be these small blocks on the sidewalk here and there, just to kind of show a (connection).”

Artpark & Company Curatorial Projects Manager David Seide presented images of block-like swatches. He said, “It's not a full blanket that we're calling it, which is within the grounds of the park. But it's little baffles of color, I guess. Little pieces of color. And so, we're asking for it to be reconsidered, obviously, and we extended an invitation to everybody – both the trustees and everybody on Fourth Street – we sent a postcard to. Everybody that came, we did an artist talk and a preview of the project. And everybody that came over, there wasn't anybody that didn't like it; everybody was in favor of it.”

Welch said, “We thought it was going to be like a full artist drawing on the sidewalk. Now, an occasional sidewalk has a couple of blocks on it, just to show the way.

“I thought it was great. … It’s not intrusive, at all, to anybody's property or the sidewalk. They're just small little blocks that every so often you’ll see on the sidewalk. I did not have a problem with it at all. I thought it was kind of a nice idea, that would connect Artpark to the village, which we have been trying to do. And I think it's a great idea.”

Trustee Claudia Marasco also said she likes what has so far been created inside the park.

South Fourth Street resident Lu Olson said, “I was really enthused when I heard about the project.”

She explained, “Exactly as you were thinking, I like that it pulls us into Artpark. It shows that the community supports Artpark, and that there's not that separation. I think that's one of the most thrilling things that we have for this community is to have Artpark.”

Deputy Mayor Vic Eydt said, “I've had two people come up to me and say they don't want it.”

Seide said any resident could opt-out of having art installed in front of their property.

“So, because it's sporadic, it can skip a house; it can be in between lot lines,” he said. “That's why it's designed this way, so it can be modified and customized.”

Welch said, “Like I say, I think this is a nice art project. Like you say, you see this on the sidewalk every now and then; it really doesn't interfere with anybody. If it's a historic house or something – they don't want it by their house – they can skip them and go farther down. And I'm sure you can talk to the residents, if you do this, to say, ‘Do you mind if we put this on the sidewalk? If you'd rather not, we can go down further.’ I think that’s the way to handle it.”

Trustees said they would render a final decision at their Sept. 7 work session. 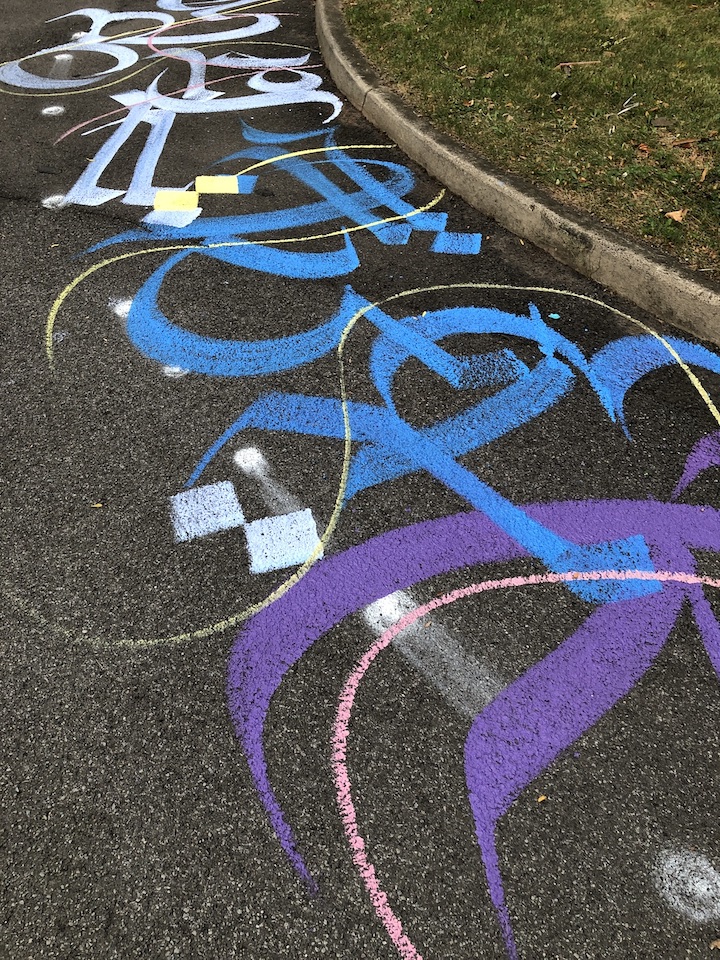 Shown is a portion of Muhammad Z. Zaman’s new mural inside Artpark State Park. Trustees said they like this art and were impressed with its creator. 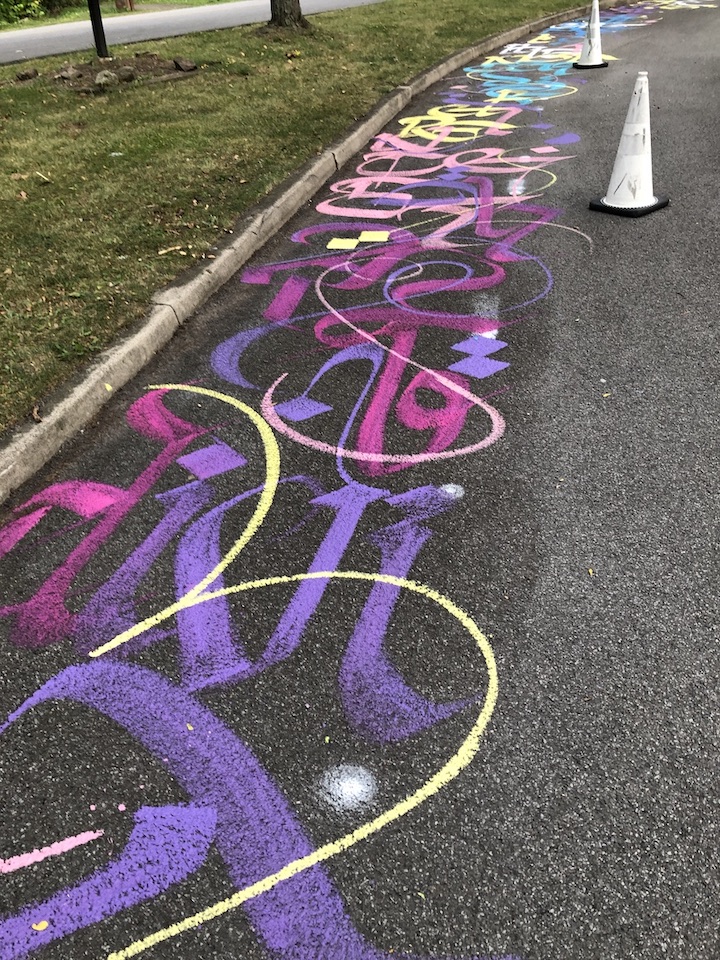 In the meantime, board members said they would canvass the neighborhood and solicit their own feedback on whether or not residents are in favor of a mural on South Fourth Street.

“The majority of people, when I ask them, what they say is what I’d like to vote for,” Trustee Nick Conde said.

Trustee Dan Gibson said, “I would rather hear it from the horse’s mouth, that they are fine.”

Seide offered to accompany the trustees.

He noted there is a time crunch, as grant monies must be spent and the project completed by the end of September. Seide said, “The whole project’s not going to take more than four days.”

Last month, Seide presented a proposal for a mural, which, he said, would, “start with just basically large-scale calligraphy, is what it is; it's beautiful, handmade etchings on the ground. And the title of (Zaman’s) piece is ‘You Will Never Walk Alone.’ It's going to start with two letters, and then it’ll keep getting more dense as it gets towards the park until it becomes a full-length sidewalk.”

Zaman called “You Will Never Walk Alone” an “abstract juxtaposition of lettering.” He wrote, “From Center to Cayuga it might only be 2 letters/symbols every in 2-3 yards, Cayuga to Seneca it might be 3-4 letters in every 2-3 yards, Seneca to Tuscarora it could be 4 letters in 6 spots, then after Tuscarora as it enters the park grounds it gets more and more dense unit it's a full carpet on the inner road that'll act as a new pedestrian sidewalk.”

Though trustees did not formally vote on that first mural proposal, the answer was “no.” Following Monday’s meeting, board members reiterated they would not approve that project as it was submitted.

She explained, “When I went down there (to Artpark) … he had that big swatch painted. And I was like, ‘Well, it’s very nice, but there’s no way we’re going to paint Fourth Street like that.’ He goes, ‘No, no, no, no.’ I said, ‘What did you want to do?’ That’s when he showed me the blocks, and I was like, ‘That’s it?’ (speaking to the unobtrusive design).

“We didn’t have the right information.”

Welch added, “I said there really wasn’t enough information, and if he comes back with the real information – because it wasn’t what he presented – I said if you bring back more information, we can revisit it.”

As such, trustees said they are viewing this mural idea – the pattern of blocks, specifically – as a new design proposal. 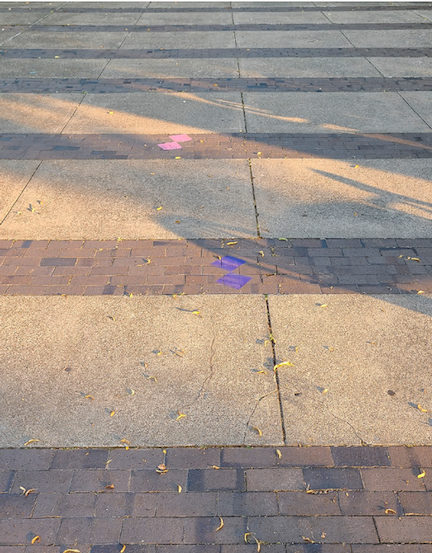 Pictured is an artist’s rendering of the block-like design that could be painted on a portion of the South Fourth Street sidewalk. (Artpark & Company design presented to the Village of Lewiston).

Zoning Board of Appeals member Bill Brodie tendered his resignation and was presented with a certificate of appreciation.

“He has been with us for 47 years; he has done zoning officer, Zoning Board, Planning Commission I think was in there; we have worked together for years, and he has done just an outstanding job,” Welch said. “After 47 years, we hate to see you go; but I guess all good things have to come to an end. …

“I want to thank you for all your years of service and wish you the best.”

Bill Brodie, shown with Mayor Anne Welch, was recognized for his years of service to the Village of Lewiston.

Trustees voted to approve an amendment to the Local Waterfront Revitalization Program wherein Center Street and Academy Park would be included and eligible for LWRP-related grant programs.

“Vic and I have been working on it for seven years, and it’s finally gone through all our committees and board and the state, and is ready to be adopted,” Welch said.

Marasco credited Al Soluri for “getting the waterfront going” in the 1970s and continuing to work for state benefits until the 1990s.

A public hearing on this amendment yielded no comments.

A community build for the inclusive playground at Marilyn Toohey Park is scheduled for Friday and Saturday, Sept. 17-18. Recreation Director Brendan McDermott said an application form with available timeslots is available online (at https://villageoflewiston.net/communityplayground-build).

“I’m sure we’ll get many people out to help us with this worthy cause,” he said.

Welch said, “They were waiting for some last-minute equipment to come in, and they should be starting construction probably by next week. I’m anxious to see that get going.”