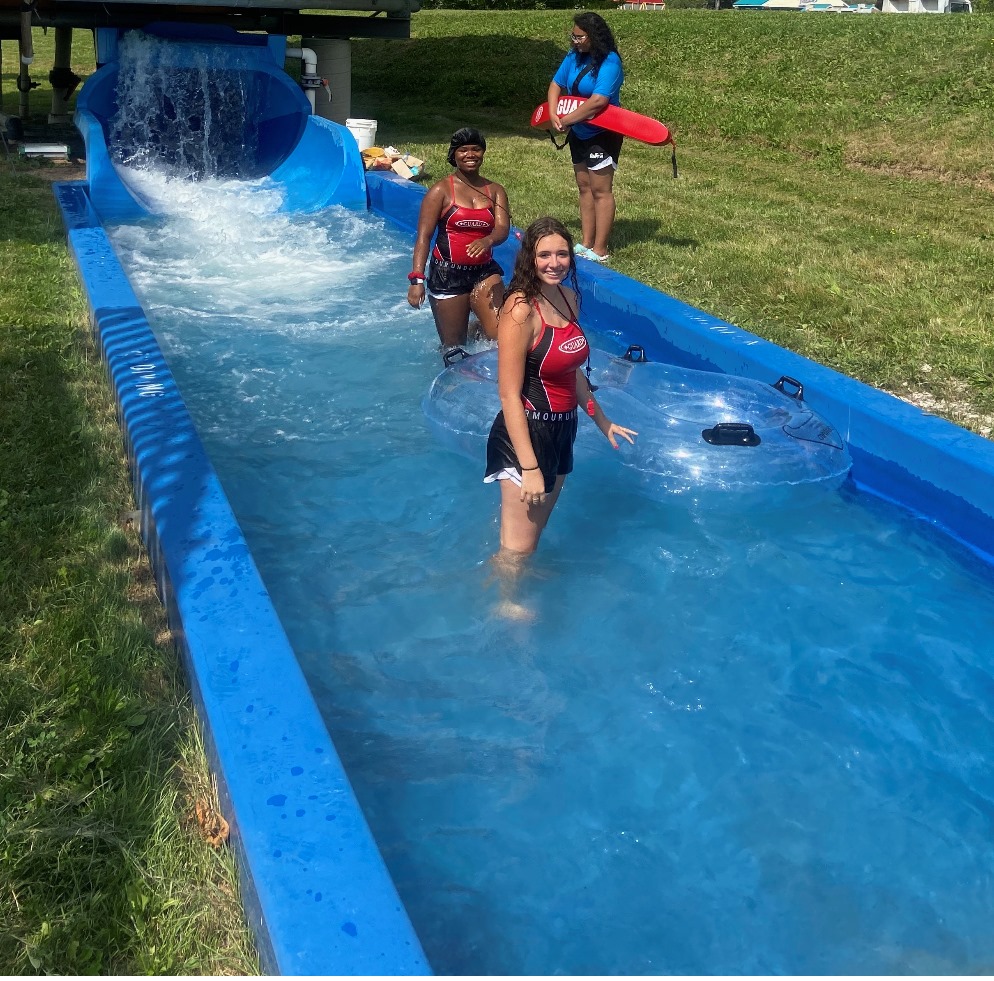 Lifeguards are being trained by StarGuard ELITE at Niagara Amusement Park & Splash World on Grand Island Boulevard. (Photo from https://www.facebook.com/splashworldny)

Niagara Amusement Park & Splash World is getting its feet wet in the water park area of what used to be Fantasy Island.

Reopening of the water park section could occur in the very near future, according to a recent update posted on the park’s Facebook page, https://www.facebook.com/splashworldny.

“Final preparations are taking place as lifeguard training continues here at Splash World,” the company announced Aug. 15. “Thanks to the folks over at StarGuard ELITE  for training and certifying our lifeguards to watch over and protect all of our guests.”

They’re also still looking for more lifeguards, as the post states: “Do you want to join in on the fun and be a part of an amazing team? It's not too late! Paid training and free certification awaits you!” The post advises applicants to go to: https://bit.ly/3krhmqe.

On July 9, IB Parks announced plans to reopen the water park portion in July, with a full ride package to be added over the next six to eight months and a spring 2022 opening of the entire park.

While the Splash Park opening has been delayed as hiring continues, staff gets trained and all is inspected for an opening day, things appear to be progressing nicely, according to photos the company posted of lifeguards training and water sluicing through the slides and tubes.

A company spokesman couldn’t be reached for comment earlier this week.

In May, it was announced Gene Staples and IB Parks & Entertainment, operator of two other amusement parks, had entered into a long-term lease agreement with property owner Store Capital to run the former Fantasy Island at 2400 Grand Island Blvd. The 60-year old park closed in February 2020.

Debi and Darren Pogue started the fan Facebook group around July 9 to give people an avenue to share news and views about the future of the park, although members also like to share memories, old photos and tell what they loved about the park when it was Fantasy Island.

“I just was poking around, and at the time, I didn’t see that there was anything like that (an online fan group focused on the park’s next chapter),” Debi said.

The Pogues were encouraged when they read news reports saying the park, plagued by vandalism while closed, was going to be cleaned up, restored and given a new, family-oriented theme. As administrators of the group’s Facebook page, Debi and her husband, Darren, wanted the focus to be on support for the new owners and what changes are in store for the park.

The Pogues did their due diligence, Debi said, even traveling in mid-July with their 9-year-old son to check out the Indiana Beach amusement park and see what to expect at the Grand Island Park. Indiana Beach is one of three parks now run by Staples under the umbrella of IB Parks and Entertainment. The third is Clementon Park and Splash World in Clementon, New Jersey.

Darren said in his online review of the Indiana Beach facility that it’s a “great old time park. Rides are classic.” He said there are five coasters, a unique boat ride on the lake and a large variety of food vendors and stores. “They maintain a family friendly atmosphere with rules involving dress code and explicit language. Overall a nice experience.”

“It was cool. There’s definitely a vintage feel to that park. It was a great time,” Debi said.

Darren said he believes Staples has a proven track record. He said he feels there are strong parallels between Indiana Beach and Niagara Amusement Park & Splash World.

“What made me so excited about it is the story about Indiana Beach and what he (Staples) did there is the same as Fantasy Island. The park closed down; they were getting ready to auction off all those rides; people thought they had lost part of their history. And he is revered there. He is viewed as the person who saved that park, saved that part of the community,” Darren said.

“We, in general, just love theme parks,” Debi said. “I believe that they’re all in,” she said of the new management for the Grand Island park. “They not only care, they have the ability to get the park going on the right foot. I think it’s a breath of fresh air … a welcome change. There’s going to be new changes to the park that people probably don’t expect.”

Darren posted online in the Splash World fan group on Facebook, “We try to be unbiased here when it comes to opinion but I have to say this: If there are any doubts that IB Parks and Gene Staples mean business, I think you can put those concerns to bed. What they’ve done with the water park (on Grand Island) in such a short time is amazing. I’m very excited to see what else they have in store. Great job to all the hard working employees and thank you Gene for saving our local park.”

Debi grew up on Grand Island and said she loved Fantasy Island. While the couple now lives in Lockport, they still have many friends and family on Grand Island. The fan page has lots of vintage photos of the early years of the park and its iconic rides.

“I remember going there as a small kid, up on through my teenage years and even later on, even when it was owned by Apex,” she said. “The park was successful at many points in time … before its later decline … why not share and rehash the excitement to get it going.”

Debi said she has reached out to various park officials, and she likes what they are saying about the plans. She encouraged them to provide details when something new has happened. She noted the response on the fan page has been pretty positive, across the board. “The excitement is only growing.”

She said it helps that people shared some drone footage of the work underway to get the waterpark ready. “They wanted to open this summer, albeit it’s August, it still looks like it’s on track (to open) before things cool off.”

As far as the theme for the whole park, Darren said it sounds like the new operators are trying to revive the idea of the classic American amusement park, not a bunch of carnival rides.

“You can’t be Darien Lake, you can’t be Canada’s Wonderland … create something unique unto yourself,” he said. “I think it’s going to resonate with people.”

“When Fantasy Island closed, our son was very upset,” Darren said. “He loved Fantasy Island. He loved going there. It was part of growing up when he was a little bit younger. Ever since he heard the news that the park is going back, he can hardly contain his excitement.”

He added, “I think people need to understand that, when the park shut down, there was a lot of vandalism to the park, a lot of broken glass, a lot of graffiti, and they’re basically rebuilding this park. So, I think people need to measure their expectations and be patient. It’s going to take a while to bring this back to what it was, and hopefully even make it better. Be patient, be understanding. There’s a staffing shortage right now. It’s hard to hire people.

“Let’s give them a chance and let’s root them on.”