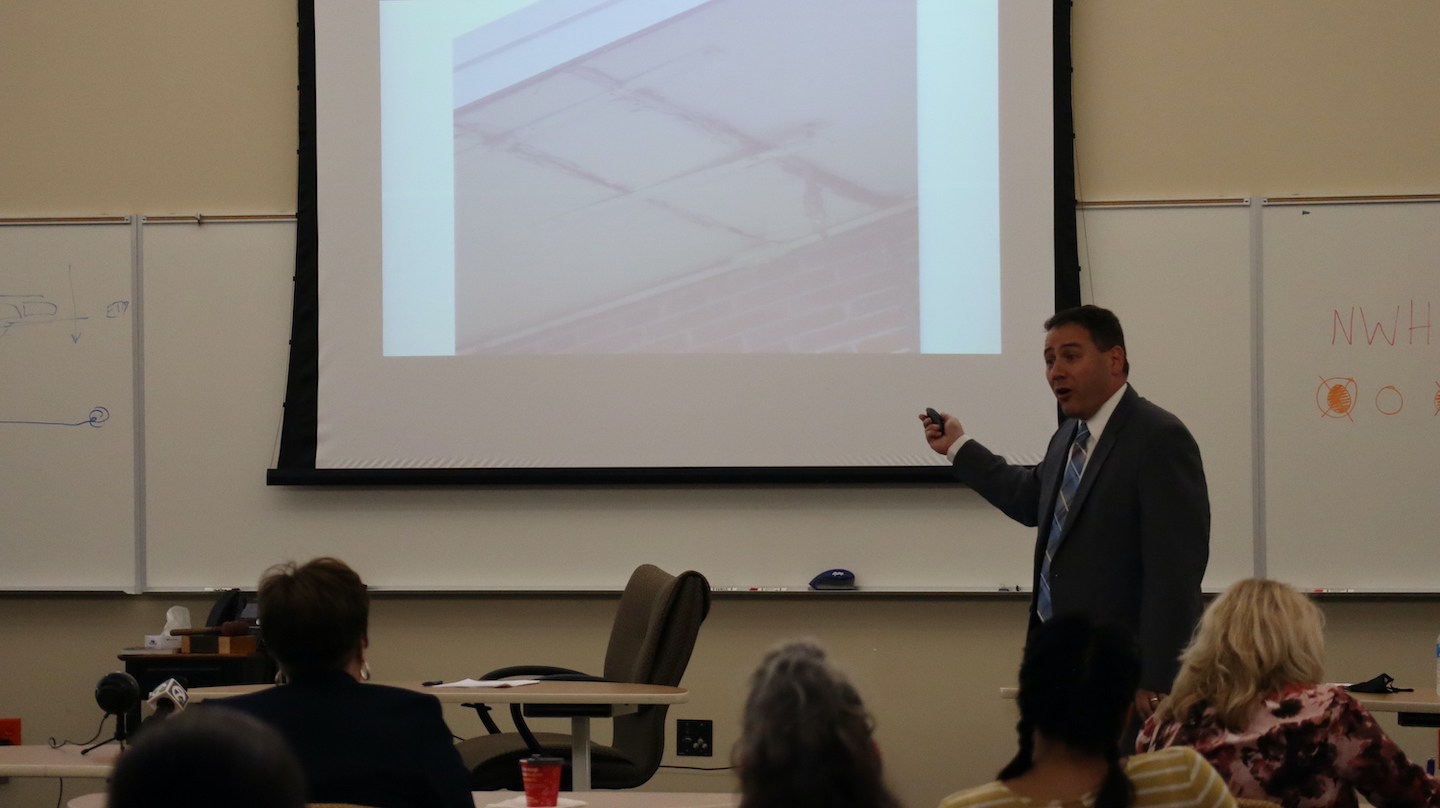 The trio came together last week for a conference to discuss inequities in capital project funding for Native American schools versus their public school counterparts. While the districts themselves provide educational programming to these schools, it is the responsibility of New York state to repair and maintain the buildings themselves. The superintendents said the state has failed to keep up its end of the bargain.

“There's a huge funding gap between the Nation schools and other school districts and the school buildings in the state. That is the issue. It's not fair, it's wrong, and, by God, it's not right,” Harper said. “The Nation schools are in critical need of repairs from façades to the mechanical systems, and everything in between. … These three buildings, each of us in each school district, they're in bad, poor condition. And when buildings are in bad condition, it affects our students' health and it affects the learning, especially the social/emotional piece about what being in a building that's falling apart, deteriorating – what are the health problems that come with it? We don't know everything, but we need to get them fixed. New York state must support the Native schools to make sure that we can create a safe and positive learning environment – for all of our students and in New York state.”

Ljiljanich said, “Things don't get fixed in our Native schools until it's too late; until things are falling apart and until water is pouring in.”

He went on to explain that, per a 2015 building conditions survey for Tuscarora Indian School, the state itself cited $7.5 million worth of repairs needed for the school. The needed repairs were listed in the report per the state’s notions of importance. At the top of the list was $1.5 million for “exterior brick repointing, overhangs, parapet and wall repairs.” Second on the list was $400,000 for water treatment/filtration system upgrades. Seventeen additional items included concrete sidewalk and stair repairs, roof and window replacements, new fuel tanks for boilers and new generator/emergency power upgrades.

“This is work that is crucial. It's critical work. This isn’t extra work. This isn't anything that's fluff. This is absolutely necessary,” Ljiljanich said.

Funding for the general public schools is approved by the state as capital projects the district’s put forth. Funding for Native schools is part of the actual legislative budget. There are 14 buildings in New York that share $3 million annually, including the three Nation schools, as well as 11 other buildings that serve students for the deaf and blind. That means 14 school buildings share about $3 million worth of funding, not nearly enough to accommodate the needs of even one Nation school’s list of repairs.

“So, in 2015, six years ago, $7.5 million. Here's what (the state has) done in Tuscarora Elementary in that time: $180,000 worth of work,” Ljiljanich explained. In contrast, he said the state has $54 million of work on school grounds in Niagara Wheatfield.

“It’s really important for everybody to understand, the building conditions surveys are only about the significant structural work. … So, some of those other projects that have to do with making sure our kids at Native schools are up to their par when it comes to technology and technology access; that’s not even included.”

“So, we need $20 million to start in the 2022-23 budget cycle. And that's why we're doing this now. We want to make sure that our legislators, the governor, lieutenant governor – that everybody's on the same page with understanding what our needs are now. Because it's still very early in their budget process for next year. Then, after that initial investment, we're asking them to approve and fund all work that’s scheduled. If it comes off for a building condition survey or we can demonstrate to them that it's a need and then it's something that makes it equitable with all the other schools in our district and quite frankly in the state. We need them to fund that.”

Following the formal conference held at Niagara Wheatfield High School, attendees traveled to Tuscarora Indian School to survey the damages for themselves. The tour highlighted the same conditions discussed at the other two schools – unsafe doors, deteriorating and falling brickwork, warped roofing. Inside a kindergarten classroom, rot around a window frame allowed water to funnel in during rain. In the gymnasium, windows were cracked and broken as structural damage to the wall that supports them caused them to bend and break. 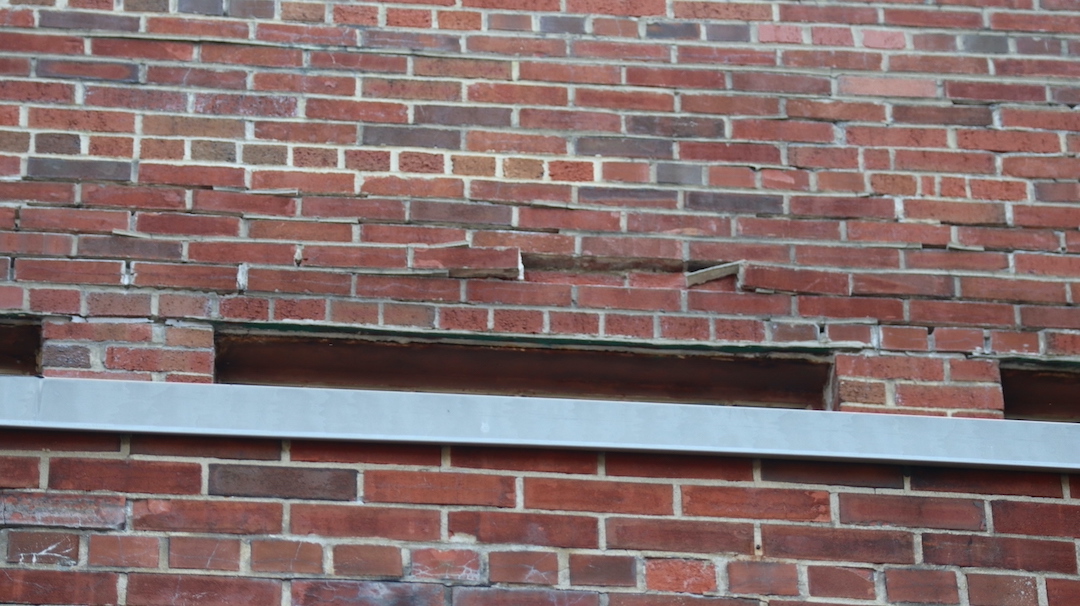 Bricks fall from a wall outside of the gymnasium.

Martin Rickard, a Beaver Clan representative of the Tuscarora Council, as well as an electrical foreman who had overseen work done on schools throughout the Niagara Wheatfield Central School District, explained the tin that bricks lay in has begun to rust as water seeps in, freezes and expands during winter and melts again. Both he and Ljiljanich said engineers have determined the wall to currently be structurally safe, but weren’t sure how long that would remain true.

“If that starts to fall, there's nothing holding that brick into place. At least in that spot, they can say for sure, if that starts to fall, the whole thing’s coming down. It would probably take something pretty drastic to send it tipping, but would fall,” Rickard said. “It’s like (Ljiljanich) said, (the state) won’t do nothing until it's catastrophic.”

Rickard went on to point to the school’s water system. Like most of the reservation, Tuscarora Indian School doesn’t connect to municipal water lines. Instead, it uses well water – water that, according to federal Indian Health Service reports, is contaminated with E. Coli and other toxic chemicals. Food and drinking water for the school is brought in from outside.

“Water is a real priority for the whole nation, but this place in particular and the Nation House,” Rickard said. “I could say we're dealing with the interior department, EPA and IHS to get funding to bring water in (to the school). As of last year, it was $25 million, but we won’t get the money until 2023. It's a three-year project, so that would make it 2026. So, $25 million would probably at least be at $30-35 million. And again, we were promised this stuff in treaties. We’re not asking for anything other than what we were promised. Just fulfill your obligation of the people who signed the treaties.”

As previously noted, upgrades to the school’s water filtration system are second on the state’s list of priorities for the school.

In attendance for the conference was a representative from New York State Sen. Rob Ortt’s office. Assemblyman Angelo Morinello participated via Zoom. He said he had high hopes the state would be receptive to the plan and committed himself to seeing it through.

“This has been very informative and it looks like it's probably one of the first times that there's been such a comprehensive plan put forth,” Morinello said. “Your local legislators, and I’ll include myself and Sen. Ortt, are on board with this. I think your plan to get this out early to the governor and get everyone on board is one that probably can work in this instance. I will commit to you that I will do everything I can to support this.

“And it just seems that, when it comes to the Native schools, New York state seems to forget about the fact that we stole this land from them; we did not treat them fairly. The Power Project took most of, or quite a bit of their land, and I think it's time we all band together to try and rectify some of the inequities that have happened – and I think we start with education. You cannot treat them as second-class citizens. They are brothers. They are comrades. And we need to make sure that we protect them.”

Still, Ljiljanich said he knows this will likely be an uphill battle with New York. It recently took the district three years to receive reimbursements from the state for funds used to operate the school. However, with letters already sent to state officials to begin discussions on the matter, he said he’s ready for that fight.

“It feels like every time we need something, it's a fight, it's a battle. And I'm not alone. All of the superintendents who are in school districts who serve Native populations are always waiting for funds, whether that's money for the operating budgets, or for capital project work,” Ljiljanich said. “It's always a fight. … That's why we're doing it now. We can't wait any longer. You saw the condition of the buildings. We can't wait longer.”