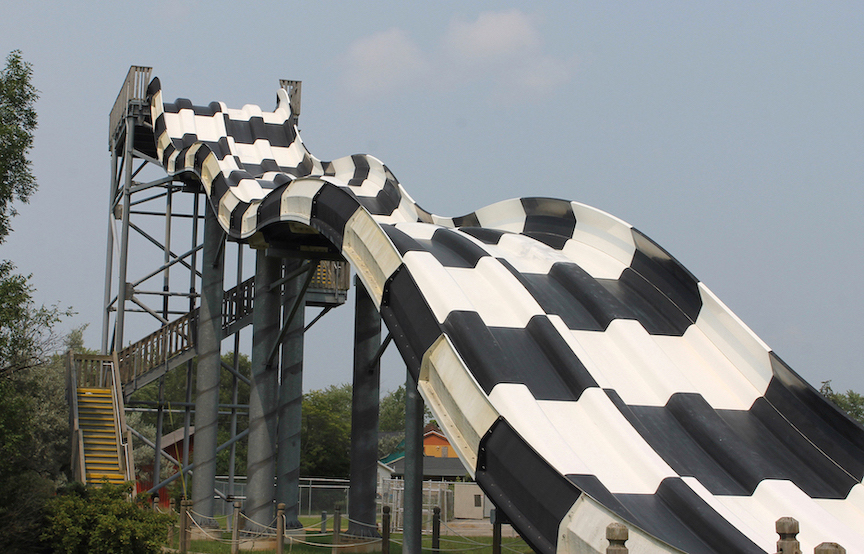 A black and white water slide towers over the landscape at the soon-to-be-open Splash World, formerly part of Fantasy Island, at 2400 Grand Island Blvd.

Niagara Amusement Park & Splash World, formerly Fantasy Island, is busy getting the “Splash World” portion of the park ready to reopen this month, according to parent company IB Parks & Entertainment.

While there is no official timeline yet for reopening Splash World, the goal is as soon as possible, Senior Vice President of Operations Gary Fawks said on Monday. An announcement could come soon, he noted.

Earlier this week, workers at the 85-acre park, at 2400 Grand Island Blvd., indicated the Lazy River ride, always popular before the park closed in 2020, may be one of the first water park attractions to come back on line. Testing the water flow and integrity of the water-bearing slides, flumes, channels and chutes are key tasks in getting the water park functional again.

All systems are being tested, including electrical. Workers from Brady Electric Inc. of North Tonawanda were also at the water park on Monday restoring electricity after a power break.

On May 11, it was announced Gene Staples, operator of two other amusement parks, had entered a long-term lease agreement to operate the Grand Island park with property owner Store Capital Real Estate Investment Trust Co.

Staples has a track record of restoring and operating Indiana Beach Boardwalk Resort in Monticello, Indiana, as of last year, as well as acquiring Clementon Park and Splash World in Clementon, New Jersey, earlier this year.

In previously published reports, Staples has said he plans to open the full park next year with a new rollercoaster that would be a major attraction. He is also on record as saying he wants to emphasize a family entertainment theme at the park and will be working to acquire rides for all ages. After the park was closed in February 2020, many of the rides were sold. But two iconic attractions, the Ferris wheel and the Silver Comet rollercoaster, remain, although they are in need of repairs.

The park’s new operators intend to be back at full strength next year. A full ride package will be added to the park over the next six to eight months, and the park will fully reopen to the public in spring 2022, according to a news release earlier this month from park spokesman Tom Crisci.

A Splash World six-hour hiring event was held this past Saturday at the Holiday Inn Express Grand Island-Niagara Falls. The Facebook page advertised full- and part-time jobs, great pay (starting pay up to $15 per hour), free tickets, free training and the opportunity to be a part of “an amazing team.”

The ad on the company’s Facebook page said one can also apply online by going to https://bit.ly/3krhmqe.

Grand Island Town Supervisor John Whitney has said he was favorably impressed with Staples’ credentials and what he’s done so far.