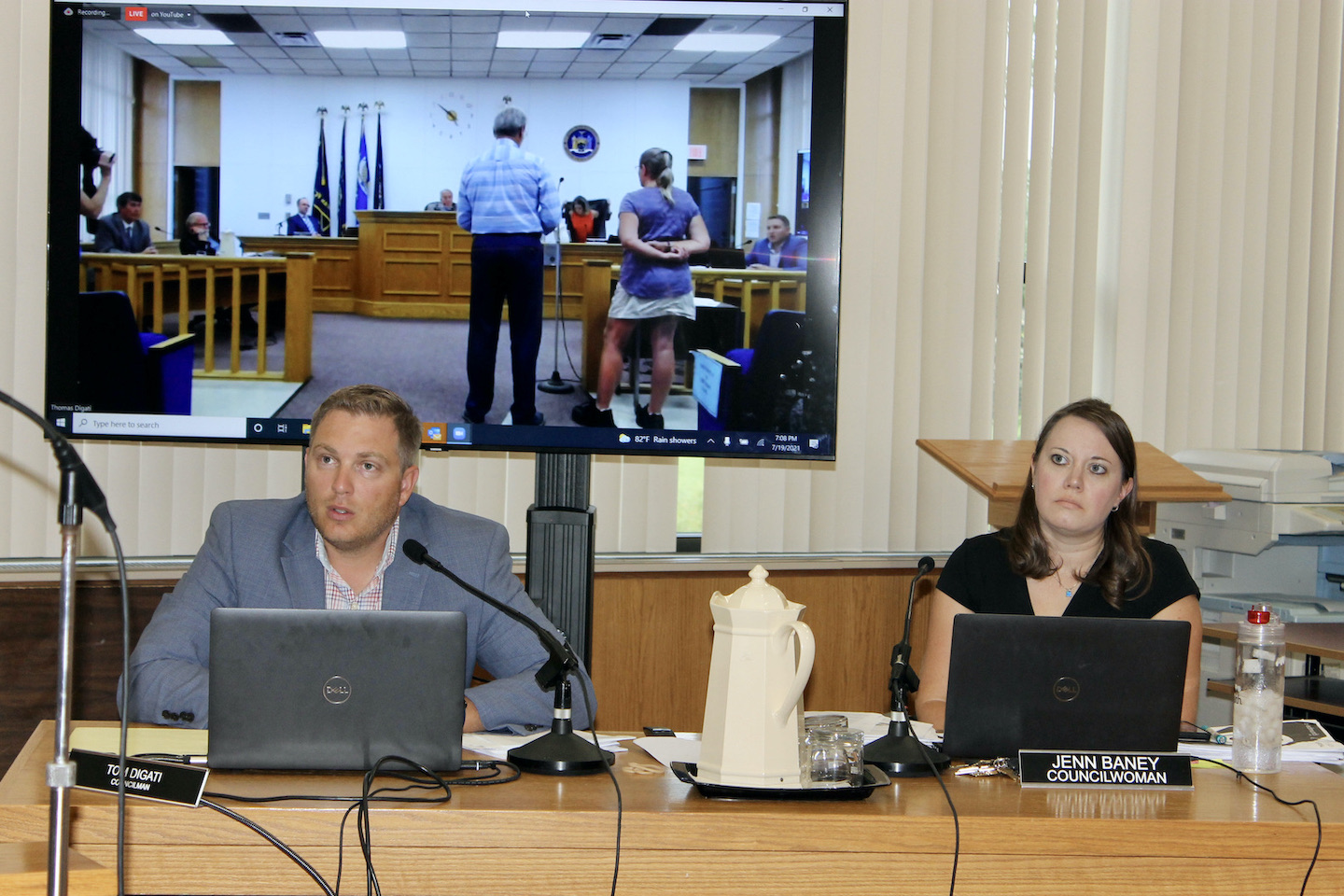 Council members Thomas Digati, left, and Jenn Baney listen as Long Range Planning Committee Chair Jim Sharpe and committee citizen-at-large Martha Ludwig (seen in the monitor above the council members) present a case to the Town Board for making the committee an advisory board, during the July 19 workshop meeting of the Town Board. Sharpe said the committee has been studying how better to achieve consistency and continuity in town planning.

Councilman Thomas Digati asked a question at Monday’s Town Board workshop meeting that seemed to resonate with members of the public who spoke later that same night.

Basically, Digati’s question was: How can you effectively hold a public hearing on rezoning for a proposed development when you haven’t seen detailed plans for that development

A parade of speakers, many of whom live near the proposed Rivertown development site, agreed with Digati’s assessment. They also told the Town Board during its regular meeting of their concerns over how the project might affect their quality of life.

At its July 6 meeting, the Town Board voted to refer to the Erie County and town planning boards the rezoning request for Rivertown Center Holdings LLC’s proposal at Grand Island Boulevard and Baseline Road.

Digati said it would make sense to consider the zoning request once the developer submits a concept plan.

“Aren’t they kind of intertwined?” he asked. “It seems stupid to be piecemealing it like this.”

He said without the public knowing the details, it would make a public hearing “completely useless.”

Supervisor John Whitney stated right off the bat that he would keep the public hearing open for another go-round at the Aug. 2 Town Board meeting, by which time the developers hopefully could submit a concept plan. Later, it was decided the public hearing could even be held open through the board’s Aug. 16 meeting.

“So let’s get their concept plan, get it up on the web,” the supervisor said.

When it was time for public comment, plenty of people had plenty to say about the Rivertown proposal. The speakers included Colleen and Walter Huff; Claudia Schmitz; Tim, Mary Elizabeth, Ryan and Amanda Wellence; Paul Solonek; and Dom Affuso.

Colleen Huff started off by saying she opposes the rezoning that Rivertown seeks. “What we’d like to ask the board is, there’s really no true definition of what the Planned Development District entails or allows to happen, and this is in our backyard.”

The board assured Huff the public hearing would be held open until the Aug 16 Town Board meeting, giving the Planning Board a chance to review the issue at its 7 p.m. Aug. 9 meeting at Town Hall, then get back to the Town Board with advice.

Also, the developer would be asked for its concept plan, which would then be uploaded to the Town Board website for the public to review.

Tim Wellence asked if there is a map that shows the five parcels or so that are to be joined for the project, so people who don’t understand “legalese” can tell which parcels are involved.

Paul Solonek of Baseline Road said that, when he and his family purchased their property 30 years ago, they were told that the vacant land adjacent to theirs was residential. “So we were fine with that. Over the 30 years, it’s flip-flopped from every different kind of zoning. So the current plan I saw is putting a three-story building along my property line on the side and the back of my property.”

Amanda Wellence of Webb Road said she has lived near the site in question for 18 years. “In my entire life, I have grown up with all this beautiful wildlife right behind my house.”

“If all of those animals have their habitat taken away from them, where will they go?” she asked. “With a new, huge building, that would destroy everything.”

Mary Elizabeth Wellence said she was against a PDD for Rivertown. “I do believe the developer – I’ve seen briefly some of the plans – I mean it looks like they have a good faith to create something beautiful. I’m not feeling comfortable just rezoning all of it to PDD.

“It’s just not a zoning change that would benefit the culture of the neighborhood.”

Dominic Affuso of Baseline Road said, “I would just hope, that as this moves forward, that each and every person on this board and the Zoning Board would take some consideration as to what we have been going through for years and years” with zoning changes, failed projects, poor drainage and lack of sewers.

Walter Huff said he worried the development would produce high-density population and traffic problems in the area.