Renderings courtesy of the New York State Department of Transportation.

On Wednesday, the New York State Department of Transportation held a public hearing at the Wheatfield Community Center to outline a proposed $5.7 million project meant to make some historically dangerous spots along Niagara Falls Boulevard safer.

Two of the project’s main target areas include boulevard intersection points at Ward Road and Witmer Road, areas which residents and local officials have called on the DOT to remedy for years.

According to the DOT, the Ward Road intersection sees 1.28 accidents per million entering vehicles (Acc/MEV), more than double the statewide average for comparable intersections (.54 Acc/MEV). Of these accidents, rear-end crashes account for 51% of 39 accidents observed in the three-year study period. Last year, the Tribune/Sentinel reported that, according to the Niagara County Sheriff’s Office, there had been 48 accidents at the intersection of Ward Road and NFB since 2016, 16 of which resulted in serious injury.

The Witmer Road intersection sees 1.07 Acc/MEV versus a statewide average of .32 Acc/ME with rear-end crashes accounting for 58% of 26 accidents in the same three-year study period.

NYSDOT Region 5 Public Information Officer Susan S. Surdej said plans had been in talks for a while to address the problem, but the DOT has struggled to balance “needs and a limited amount of resources.”

“We have a dedicated amount of funding and we have to prioritize our projects, so we go through and we rank our projects. The intersections of both Ward and Witmer have higher than the statewide average for accidents. … So, it’s time we did a project here,” she said. “Hopefully, this will be a very well-received project, but we're here (tonight) just trying to get comments back from the people; taking any feedback. This is our proposed project but ... we're open to comments at this point. These are only preliminary designs. This is the time to really get feedback from the community and that's exactly why we're here tonight.”

Last year, the DOT implemented a few small changes to the areas while its larger plan was drafted. The speed limit in that section of the boulevard was permanently lowered to 45 mph and new signage was added including “Signal Ahead,” “Be Prepared to Stop” and “Do Not Drive on Shoulder.”

At Wednesday’s public hearing, DOT officials debuted drawings and mockups highlighting the proposed major changes. At the Ward Road intersection, the plan calls for the road to be widened to accommodate the addition of dedicated left-turn lanes on all four legs of the intersection. Additionally, the existing concrete box culvert carrying Sawyer Creek under Ward Road will be replaced.

At the Witmer Road intersection, dedicated left turn lanes will be added to both legs of Niagara Falls Boulevard and Witmer Road. Additionally, at the request of the Town of Wheatfield and Niagara County, the Oppenheim Park driveway will also be realigned directly across from Witmer Road to create a four-legged intersection. Currently, drivers traveling down Witmer have to make a left and then an immediate right into the park entrance. This will require the installation of a new box culvert to carry Sawyer Creek under the new driveway.

Elsewhere, plans call for existing traffic signals and signs to be upgraded and for sidewalks to be added to the south side of Niagara Falls Boulevard within the work limits at both intersections. They will also see the installation of ADA-compliant curb ramps and pedestrian signals on all four corners of each intersection.

To facilitate the additions, the DOT said small parcels of land will be acquired for road widening, but no residential buildings will be required, and the purchases are not expected to adversely affect businesses. Affected property owners will be contacted directly by the DOT prior to purchase.

The DOT said that, to minimize construction impact, two-way traffic will be maintained during most of the project, although some lanes will be temporarily closed on all three roads. Delays are expected. It also said that, during an approximate two-week period, the north leg of Ward Road will be completely closed to accommodate culvert replacement. A six-mile signed detour will direct motorists to use Walmore Road and Lockport Road. No night work is planned as part of this project. Travel advisories will be issued in advance of work.

In the meantime, the DOT is collecting public feedback on the project and will include those responses in its updated design report in September.

While only a limited number of citizens spoke during the public hearing, the DOT said it will continue to accept responses in writing and online until Aug. 11. Comments can be mailed via first class mail to 100 Seneca St., Buffalo, NY 14203-2939. Online comments can be submitted at www.dot.ny.gov/Rt62WardWitmer/contact. 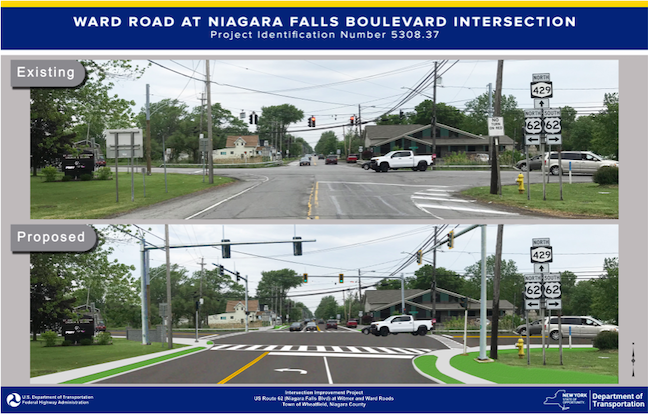 Renderings courtesy of the New York State Department of Transportation.

Those who gave feedback at the hearing said they were all in favor of the project but raised different concerns and questions. Steve Wingrove, owner of Alder Creek music, urged officials to move the proposed sidewalks away from the road, noting many drivers ignore the posted speed limit and they would be unsafe.

Mark Pierson, who owns land that will need to be purchased to facilitate the project, had concerns about how the state would buy the lands.

"I want this project to happen. I just want to make sure that I'm compensated," he said.

In a presentation, DOT Real Estate Specialist Anthony Dispenza said, “We realize this is not the typical buyer-seller relationship. Although the eminent domain process allows the state to acquire private property for public use, you are entitled to just compensation. The goal of the Office of Right Away is to make sure that this process proceeds as smoothly as possible for all concerned.”

For more information concerning property acquisition, DOT officials pointed to the pamphlet, "How NYS Acquires Property For Public Purposes," which is located at www.dot.ny.gov/Rt62WardWitmer/reports.

The last comment came from Doris Carlson, who noted $1.8 million had been previously allotted in 2016 as part of a federal grant for remediation specifically for the Ward Road intersection. She asked whether those funds were available to be used for the project. Surdej said they are and will be.

Carlson, who lives right off the intersection and has seen the dangers firsthand (and frequent annoying traffic backups), has been among the most active community voices to raise awareness of the roadway’s dangers. Last year, she spearheaded a letter-writing campaign for residents and local businesses to raise the issue with state officials and the DOT. She said while she’s happy to see activity related to the project, after so many years of false starts, she’s still skeptical. More so, she had concerns whether resident concerns related to the current project would be truly addressed, or whether the DOT would choose to ignore them.

“I'm happy they’re getting something done but, you know, it's still what they want in. … If they aren't going to take the residents into account, then what is their point?” she said. " I mean, (this) was an argument 20 years ago. I've been in my house 25 years. People in town have been arguing that they needed a left turn lane, not only from the boulevard but for Ward … and it’s been unconscionable they haven't been able to put all this together and say, ‘Hey, we need to do something.’ Now they are, but how long are we going to have to wait. Is this just to keep us quiet, because I made some noise a couple years ago? I don't believe it anymore. I went to this kind of a meeting 10 years ago; I saw the same renders; and then it's talking about the acquisitions of the property and things like that. It hasn't changed."

Incidentally, as if to underscore the issue, at 4:30 p.m., the Niagara County Sheriff's Office reported a two-vehicle accident at the Ward Road intersection, just as the meeting was getting underway. As the accident report has not been released yet, there are no further details.