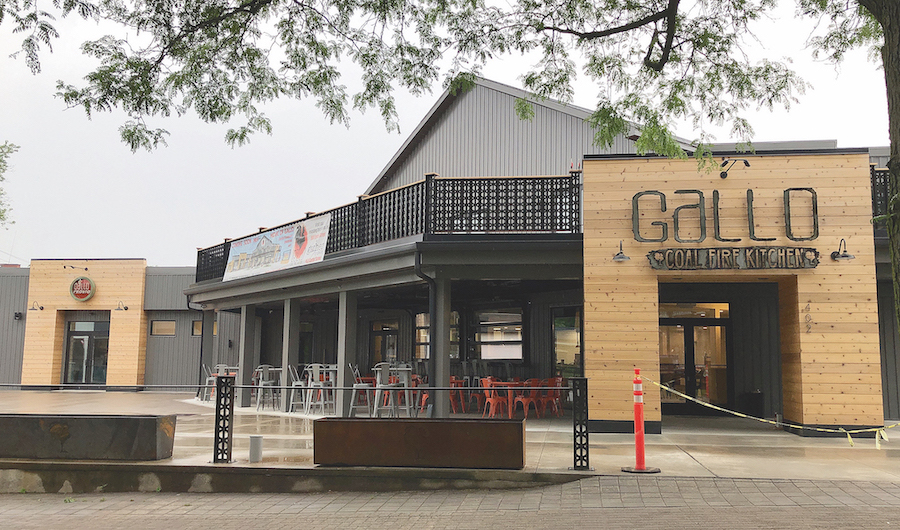 Michael Hibbard has a “good problem.”

While working at Center and North Fourth streets – site of the new Gallo Coal Fire Kitchen – he is constantly asked when his third Lewiston restaurant will open.

Having recently converted the original Gallo site into Gallo Loco, a Mexican eatery offering authentic street tacos, and with his Gather by Gallo a popular spot for American cuisine, people are anxious to get a look inside (and grab a pizza).

“It's tough when you're out here, because you literally see everybody. So, you get asked that question – I'm not exaggerating – it's up to 10 times a day. Which, like you said, it’s a good problem,” the restaurateur said. “I think people are excited about the transformation of the corner, and people are excited for, I think, a new concept in Lewiston, which we've done it at Loco, as well. But all in all, I feel like it's a beautiful space to hang out at and to be seen in.

“Now with Artpark coming around, it’s a good thing, because that gives them another place to hang out and walk down.”

Construction began at Fourth and Center prior to the pandemic. The COVID-19 shutdown delayed work and made it difficult to find laborers.

Despite that, Hibbard pressed forward. Interior work is now wrapping up, and Hibbard said he expects Gallo Coal Fire Kitchen to open to the public later this month.

His mother, JoAnne Paonessa, who was on site for this interview, said, “Everybody seems to be pretty excited. Welcoming. This corner looks 100 times better. It's a great addition to the village.”

Fourth and Center has sat idle since early 2020, when Brewed and Bottled Craft Beer Shop, Sgt. Peppers Hot Sauces and the Mad Hatter Tea House left to join attorney Alfonso Marra Bax’s building next to the Frontier House. Though those Lewiston staples were drawing customers to this corner, there was debate as to whether the site was used to its full potential.

“That's one thing that really, when we had started this project, that was our goal, was to have this be not only a space for the Gallo property, but also for the community,” Hibbard said. “And I think we've achieved that just by obviously beautifying the corner, and actually making it accessible for customers. I think that was one of the difficulties of how it was laid out before. It just wasn't very accessible for anybody.”

Once Gallo Coal Fire Kitchen is fully operational, it will include a courtyard with artwork, plus a second eating option in Gallo Pronto, a grab-and-go coffee shop next to the main restaurant.

As to the former, Hibbard said he’s had conversations with Artpark & Company about joint art ventures. Moreover, “There's going to be a couple of my pieces there. And we've talked to some other people that I know in the art world that are excited about displaying some work, mostly with a sculpture focus.

“We have endless amounts of space for that.”

With regard to the latter, Gallo Pronto will offer “espresso, cappuccino, coffee, premade sandwiches, pastries – just really kind of like a coffee shop,” Hibbard said. “We're going to start off with some sandwich options and some premade salad options, and then see where it goes from there.” 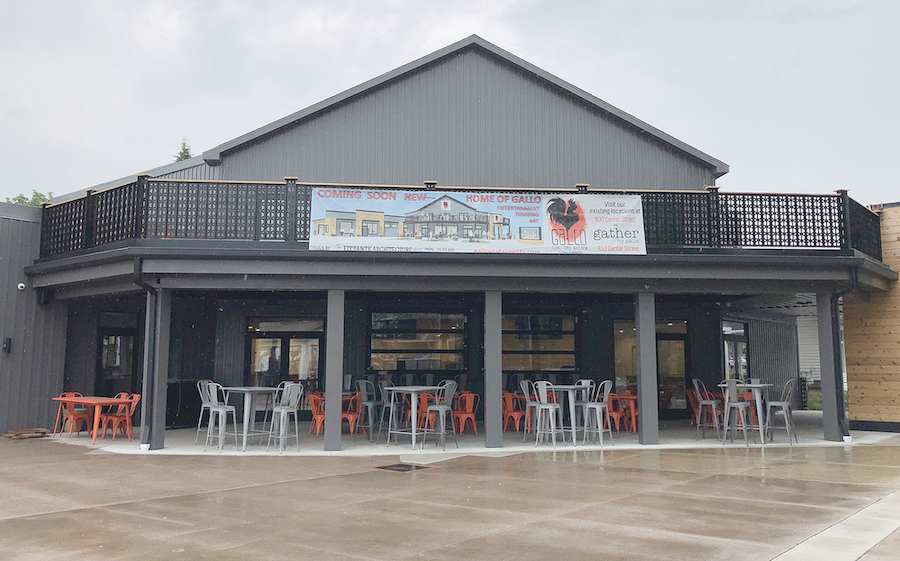 Two of the most noticeable features inside the new restaurant are the open-kitchen concept and double-sided bar, which can serve patrons both inside and on the patio.

Gallo group head chef Douglas Herrick said, “Just like in the old place, the pizza is out in front of the customers, and now all of the pasta and other entrees are also going to be made right out here in front of everybody. So, one continuous line.”

He explained, “It’s a little interactive. For us, customers will come up and talk to us, which is kind of nice. I like that they can do that. It's a nice arrangement for all of us working together, too, because we can communicate easily with each other. It's nice, from our end, to be able to watch people come in and out and enjoying themselves.”

Herrick said the menu, which offered pizza, pasta and proteins at the original place, “is growing.

“I think the pizza will always kind of be our anchor, but we're going to definitely show what else we can do from there. I think we're going to offer some more appetizer-like starter options and entrees as well. But yeah, the pizza will always be a centerpiece for us. I mean, it's obviously featured prominently right there” with the coal fire oven.

Paonessa noted, “The biggest addition is to be able to serve outside. These are all garage doors” she said of the “windows.” “They totally open, so we’ll be able to serve. There's a bar outside. We're gonna have tables out there – you'll be able to eat out there. We're just hoping to service more people than we could up at the (original) Gallo.”

Hibbard said the building’s second floor will be used for “special events and probably overflow when the season starts to change and we can't use the patio.”

Indoor seating will be for about 100 on the first floor, with another 125 or so on the second floor.

“It's pretty much exactly what we envisioned – like to a T,” Hibbard said. “I think that's one thing that I'm good at, is having a vision for something and executing it. It’s exactly what we thought.”

Village of Lewiston Mayor Anne Welch said, “I’m very excited that Michael Hibbard is reopening Gallo Coal Fire Kitchen at the new location at Fourth and Center Street. This restaurant has proven to be one of Lewiston’s great eateries since its original opening in 2016 and is enjoyed by many locals and visitors alike. I have been watching the construction of this restaurant and I am very pleased with the results. He has transformed the old building into a beautiful new restaurant.

“Mike has proven to be a very successful restauranteur, and his restaurants are an asset to the community. His good business sense along with his love of good food definitely serves him well. I have personally known Mike all his life, and he is a very intelligent and energetic young man. Mike is also a very talented artist and has been very involved in promoting art in the community. I am looking forward to seeing his beautiful sculptures displayed in the outside courtyard area. …

“I am grateful that he has chosen Lewiston to open his restaurants, and I wish him continued success.” 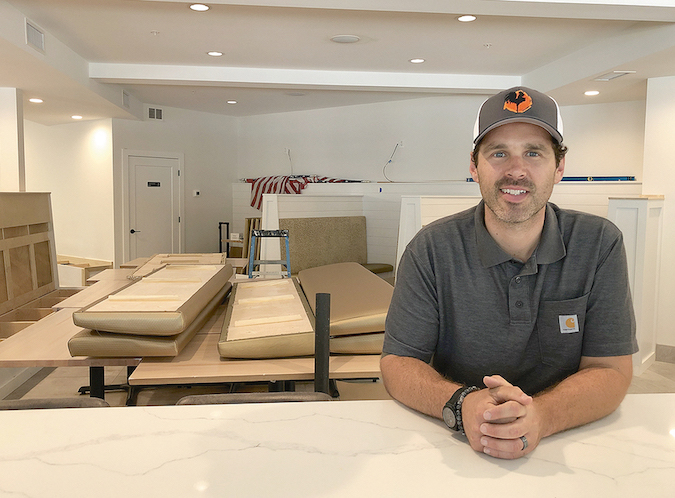 Michael Hibbard is shown inside Gallo Coal Fire Kitchen last week, as construction was set to wrap. The eatery is set to open later this month.

Though Hibbard’s third and final Center Street restaurant is nearing completion, that doesn’t mean his work is over.

“We have now branded a product with Geoffrey Zakarian. We've been working on that for a good solid year now,” he said.

Zakarian, an “Iron Chef” and Food Network TV host and judge, pitched the product on QVC2 last month. He will sell it on QVC in mid-July.

Hibbard said, “I'm really excited about that project and being friends with Geoffrey Zakarian. It's opened up a lot of doors for me.”

Margaret Zakarian, Geoffrey’s wife, is a member of the Williams family. The couple is often seen in Lewiston eateries and at Artpark events.

“We kind of have a connection – her family, my family kind of know each other,” Hibbard said. Of the top chef, Hibbard explained, “He’s an easy guy to talk to and pick his brain. We’ve created a relationship. And one day last year during COVID, he stopped in. … I said, ‘Hey’ I’ve got this idea, what do you think?’ And I've talked to his wife, Margaret, about it, too. And they said, ‘Let's do it.’ So here we are, a year later, and it's on QVC.”

Hibbard explained “It’s an all-natural product; real minimal ingredients. We've launched with the Pomodoro sauce, which is just a red sauce. And then we also have the Calabrian chili marinara, which uses a Calabrian chili directly from Calabria, Italy. So, it gives you some spice. We've launched with those two products, and then we want to eventually get into other things. We have some things in the pipeline that we're working on. But that was a good test for us to see what happens.

“Another great thing about QVC is we have another Lewiston connection. All of the distribution and all of the fulfillment is coming out of The UPS Store in Lewiston. They're handling all my fulfillment for me, which is great because it's close to home. I can see what's going on.”

Though he is branching out across the country – and intends to open additional restaurants outside of Lewiston – Hibbard said his goal right now is opening Gallo Coal Fire Kitchen.

“We want to focus on the restaurant itself,” he said. “If we can get Pronto open at that same time, we're going to shoot for it. It's just this is our priority, to get this place open. Pronto – all the equipment's in. We're ready to go. It's just getting that extra staff, which everybody is dealing with right now.”

Pronto will primarily cater to the lunch crowd, while Gallo Coal Fire Kitchen will be open for dinner.

Visit the Gallo Family of Restaurants: