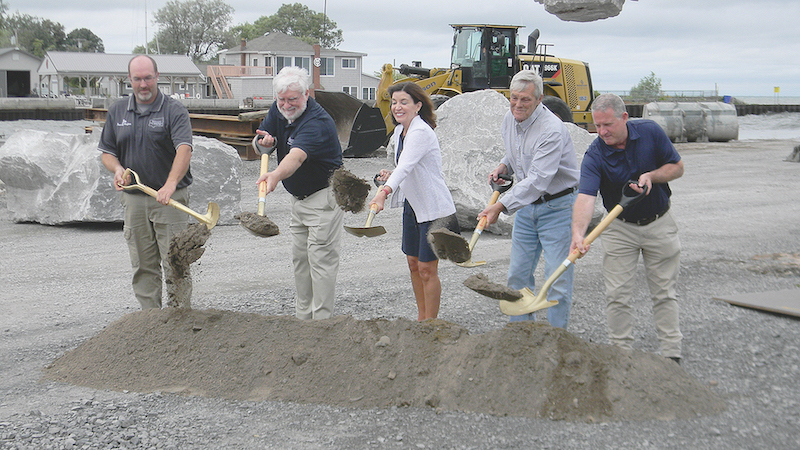 Progress on repairing the flood-ravaged shoreline in Niagara County took a big step forward in past days with the startup of a massive, nearly 400-foot, $14 million breakwall project in the hamlet of Olcott Beach.

Lt. Gov. Kathy Hochul was joined by Town of Newfane Supervisor Timothy Horanburg and a number of state, county and local officials in visiting the Hedley Boat Co. complex on the Olcott waterfront Tuesday to announce the project.

The Olcott project, to be completed with $13.3 million in state grants and assistance through the governor’s Resiliency and Economic Development Initiative, will see the creation of a 350-foot, oval-shaped breakwall in the harbor area at the mouth of Eighteen Mile Creek entering into Lake Ontario.

“After historic flooding devastated homes, businesses and infrastructure along Lake Ontario in 2019, New York has been leading the way to provide much-needed help to these communities,” Cuomo said. “Through REDI, we are not just rebuilding the shoreline's infrastructure, we are building back stronger and smarter for a more resilient future, and that's exactly what we're doing with this project in the Town of Newfane.”

Eric Gertler, who serves as REDI co-chair, said the long-standing shore erosion problem “affected all areas of the Olcott Harbor, from private properties to municipal facilities and businesses. Going forward, this new breakwall will help lessen the damage from wave action, a vital step toward minimizing the risks associated with shoreline development and improving the quality of life for residents.”

The project, being undertaken by Sevenson Environmental Services of Niagara Falls, seeks to mitigate the negative impacts of extreme weather conditions on the harbor entrance. Its purpose is to further protect boaters, local businesses, and public/private properties that play a critical role in the local recreation/sport-fishing-based economy.

Upward of 3,000 truckloads of boulders are now in the process of being trucked into the hamlet for the project, which is expected to continue into November, according to Sevenson officials.

“We are very excited that construction has begun on the long-awaited Olcott Harbor breakwater project,” Horanburg said. “On behalf of the town, I would like to thank Gov. Andrew Cuomo for his tremendous support, and the REDI Commission in assisting the town in moving this project forward. The governor's and state agencies partnership and guidance was priceless in the development of the plans and permitting of this project. The completed breakwater project will protect the harbor and allow for economic development in the Town of Newfane for decades to come.” 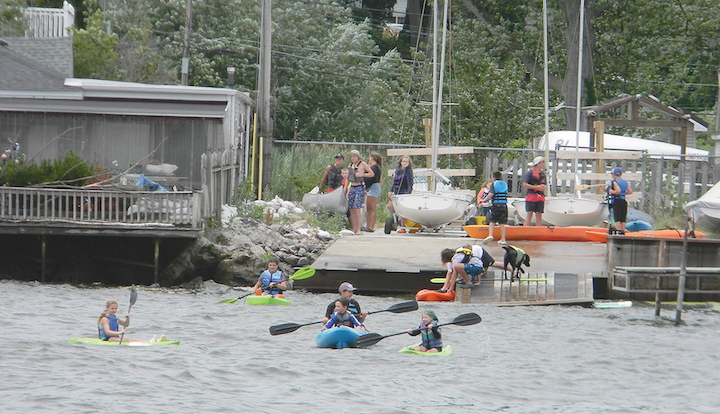 Kayakers mill about in Eighteen Mile Creek in Olcott adjacent to the new harbor breakwall project. (Photo by Terry Duffy)

In her remarks, Hochul recalled the decades-long wishes of local officials for the breakwall to become reality.

“This does seem like the end to a very long journey. It’s been a long time coming,” she said.

Recalling her association as a legislative assistant with former U.S. Rep. John LaFalce’s office while a law school student, and of visits to the Olcott Beach area, Hochul spoke of the common wishes of the community from way back in the 1970s and ’80s.

Hochul spoke of the recent struggles the hamlet dealt with in 2017 and 2019 when historically high water levels throughout the Lake Ontario basin resulted in severe flooding, devastation and financial hardship. She called the 2017 floods a “100-year event,” that devastated Olcott and then returned in 2019. Hochul said the lake flooding experience – then exacerbated by contending with COVID-19 in 2020 – went on spur not only a community, but also a regional and state response to address the years of hardship.

“They talk about how ‘it takes a village’; well this took a town to bring back a community. And you led this (comeback),” Hochul said. “We’re going to be victorious with Mother Nature, and we’re going to win. This is one tough community. All of you have put up with so much: the flooding, the devastation (and) the impact on local tourism.

“I am really happy to be here at the conclusion of all these events and to celebrate what we are going to do here.”

Hochul went on to discuss the state’s plans that, once complete, would see the creation of an offshore oval-shaped breakwall for the Olcott harbor area at the mouth Eighteen Mile Creek. “This is going to be a $14 million project, with $13.3 million in state grants. We’re going to install an offshore, oval bubble mount breakwall, 350 feet in length.

“This is going to transform this community. I look so forward to coming back once this is done.”

“The Olcott Harbor breakwater project not only seeks to repair the damage from Lake Ontario flooding, but offers a chance to build back better and stronger, and open opportunities to extend the navigation season longer, and thereby increase economic activity,” she said. “This project is exactly why the REDI program is so important and why my colleague, Legislator John Syracuse, and Newfane Supervisor Tim Horanburg worked so closely with state officials to make it happen. The partnership between New York state and local governments on REDI projects is collaboration at its best.”