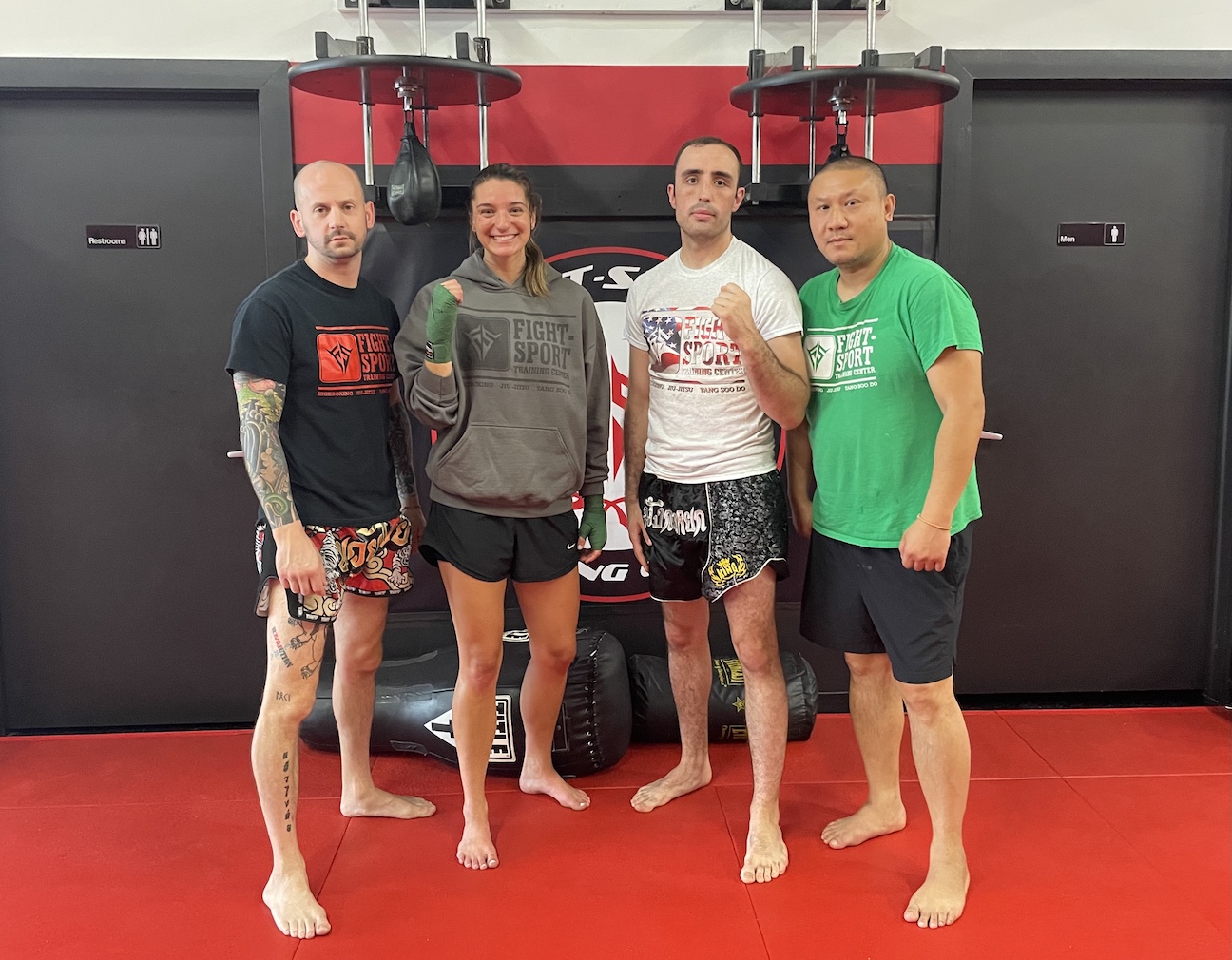 After five years of training and honing her abilities at the Fight-Sport Training Center, Town of Niagara’s Mackenzie Musgrove was set to make her amateur kickboxing debut last year on May 9. The preparation leading up to the bout was grueling. As her trainer Pativaj Soundara explained, it's essentially a second job.

“Usually when we train for a fight, we usually train for like, two or three months,” Soundara said. “It's a fight camp; so, they show up at least four to five times a week and train for an hour-and-a-half to two hours. (When) we know the fight is for sure, for a month it will be two-a-days – 8 in the morning and then later at night around 5 o'clock. These guys, I make them run on their own; they run about three miles in the morning and another three miles at night. And then they have to have a super-strict diet. There's a weight limit that they have to meet. Most of them are cutting seven, eight pounds within a couple months.”

It was already a challenging year for Musgrove. A senior at Niagara Wheatfield High School, she balanced her intense kickboxing schedule along with schoolwork and time on the lacrosse team, a sport she’s partaken in since seventh grade.

“I would go from lacrosse straight to kickboxing. It was a lot, ” Musgrove said with a laugh.

But just before the date arrived, the fight, much like her senior prom and her final season of lacrosse, was canceled due to COVID-19.

“It was a crappy, crappy time,” Musgrove said. “It was kind of really upsetting, because it's just that excitement you get that I'm finally gonna put all my work to use. I see how my coaches look at me. They obviously see that I have potential and now it's just gonna be taken away. All the hard work you put into it.”

It wasn’t just emotionally taxing. Soundara spoke about the difficulties of keeping up with training during the shutdown.

“It was tough,” he said. “To train, you have to go train on the streets, out in parks. You couldn’t open the gym, because you didn't want the health board coming to shut it down. … We would go down to (the Niagara Gorge), Devil’s Hole and have them run; give them an exercise regimen. Then, if those guys feel comfortable, we'd go to a park or out in a backyard. I have my pads and this way they would be in good condition; their reflexes were still sharp.”

The unexpected shutdown did allow for some positive developments for Musgrove. For starters, leading up to the scheduled fight, she suffered an ankle injury in training, which she had intended on fighting through. As that healed, she completed high school and started attending Hilbert College where she now studies forensic science and crime scene investigation. She joined Hilbert’s lacrosse team and, as a freshman, was named captain. Her family even threw her and her boyfriend a private prom at the family home where they reenacted the “Time of My Life” dance from “Dirty Dancing.”

The love and support she’s received from her family were a big reason why she had the confidence to start fighting in the first place.

“My family would always go to Buffalo Wild Wings to watch the UFC fights, and just one day, I was like, 'Oh yeah, I want to do that.' So, I did some research; found Craig's (Reed, owner of Fight-Sport Training Center) gym and just fell in love with it,” Musgrove said.

From the get-go, her parents were encouraging – if maybe a bit nervous.

“My mom, of course, is always a bit nervous about it, but she supports me 100%. My dad 110% supports it,” Musgrove said. They always looked at it, like, not only am I learning a sport or whatever, but I'm also learning to defend myself. So, they really like the idea of it. They enjoy watching me train. Pat lets them come in and they like to see where I'm at. There was never a moment when they didn't support me.”

The familial aspect and its respect toward women is something Soundara says Fight Sports strives for and what sets it apart from other gyms.

"We cater more to families. We do special classes just for moms and daughters, like new beginners We have kids classes just dedicated to the kids, so, that way, they don't have to train with the adults. Most places won't take anybody under 12-13. We also have a lot of special needs kids that a lot of other gyms don't take. I love working with these kids. I mean, they know they're behind everybody else, but they come in; they work so, so hard; and to see the smiles on their face on the face … it's just a very family oriented environment," Soundara said.

Musgrove also credits her upbringing, roughhousing and playing lacrosse with the boys for making her a tougher athlete. It certainly proved helpful as she began training, since she’s primarily sparring against men.

“Every time I’m training, I'm working with guys that are bigger than me. Like way, way bigger than me,” she said. “It's kind of cool to see that your coaches think you have the potential to be put up against someone bigger than you, especially male. So, it's really cool to just give you that sense of empowerment and just a sense of, like, ‘Oh, I can do this.’ ”

Despite some positives experienced in the past year or so, the specter of that lost first fight loomed large for Musgrove.

With a new opponent lined up, she is set to make her amateur kickboxing debut on July 24 at Ground Force Fights 6. Mike Stevens, another fighter training under Soundara, is on the card as well.

After the last missed opportunity, Musgrove said she’s more focused than ever: “I just keep picturing that night; seeing her in the ring and just doing what I need to do in order to win.”

“Oh, she's even more excited. She's more than ready to go. She’s just ready to fight,” he said. “ You miss that opportunity, you never want to miss it again. Like, ‘Oh my god, I wasted a whole year.’ Now’s the chance.”

At 5’9, Musgrove will need to draw on that experience fighting bigger opponents. She’s set to take on 6’2 Pria Sinha of Schenectady. Height isn’t Sinha’s only advantage. She has four fights under her belt with a 1-3 record.

Soundara said he isn’t worried about his fighter at all. It's significant praise from someone with his experience. Fighting since he was 16 for Ray Casal of Casal's Boxing Club, Soundara went to three Golden Gloves and won gold at two Empire State Games before making the switch to coaching.

“She's super smart. … Some people are just brawlers, but she has a high – they call it fight IQ; she sees stuff develop,” he said. “She picks up body stuff real quick. You show her something a couple times, she picks right up on it. She picks up on the patterns of fighters. She's a natural born leader. She's a super strong girl, too.”

Asked about the allure of fighting, Soundara said it's about that need to compete and prove yourself.

"When you're in most sports, you need to rely on your teammates. In combat sports, it's just you,” he said. “You don't have to rely on anybody else. It is your skill versus the other guy's skill. If you didn't put in the work, you know in that first round that you didn't put in the work; and this guy who put in the work, he's gonna outwork you. It's also a dangerous thing. Like, you know you're gonna go in there and you're gonna get hurt, and that's conquering your fear. It's something not everybody can do. Like, who wants someone to punch you in the face?"

Musgrove agreed. For her, it's about chasing the same thrill she’s always enjoyed from competing – the thrill of pushing herself beyond her limit.

“I think it gives me something,” she said. “It gives me motivation and a drive to do good; knowing that satisfaction of winning and saying like, 'Oh, I did that; I accomplished something; I won. I pushed myself to a limit I thought I couldn't push myself.’ It's just a big relief and it's just a proud moment for myself. …

“When I first started, I was 14; one of the youngest ones at the gym and one of the only females. So, at that age, you know, you're still growing up, exploring things, and I was still coming out of my shell. So, actually, I think this kind of helped me come out of my shell more. It makes you a more confident person. Now, I’m the only female in my gym really training for something like this."

Musgrove said she doesn't know where fighting will lead her. For now, it's all about this moment coming up. However, if another challenge arose, she certainly won't back down.

"This is more of a hobby for me, (so) I wouldn’t say I'd go searching for fights, but if the opportunity was there, I'd definitely take it,” she said. “Right now, I'm just focusing on school and then when I graduate – I go to school for forensics and CSI – so when I graduate, I'd like to pursue a career in something like that. But, yeah, this is just something if it's there, I would definitely take it. I wouldn't want to miss something like this."