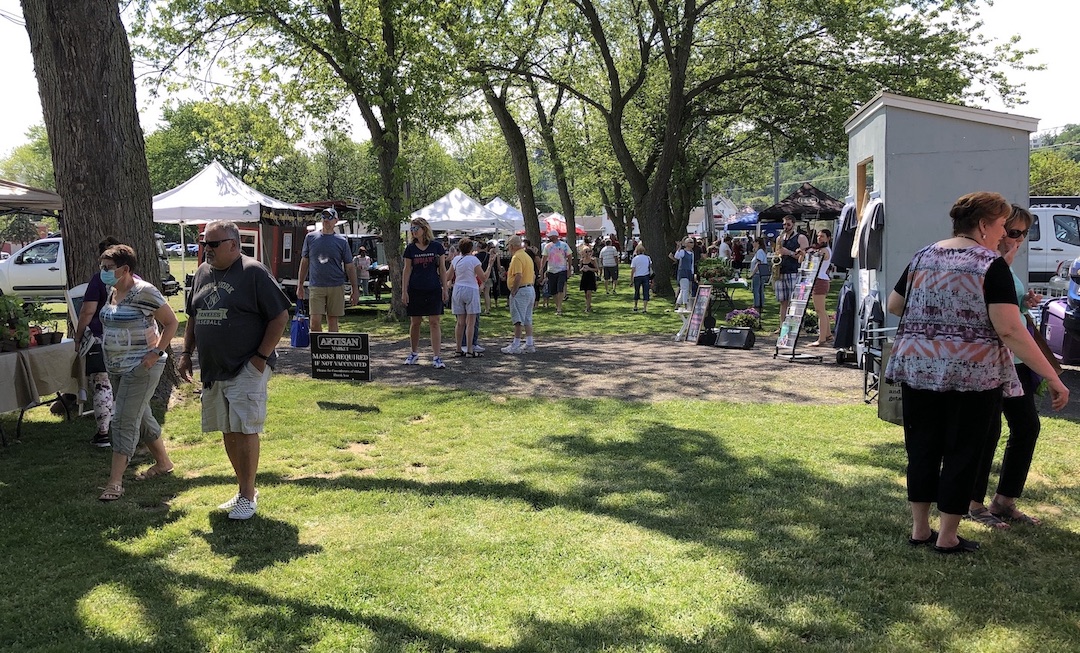 Tensions high at board meeting

Tensions were high at Monday’s Village Board meeting, as Lewiston Artisan Market organizer Jamie Symmonds and about a half-dozen vendors appeared before trustees petitioning for equitable treatment.

“I just want to ask: If you do not want this farmers market to be in your Village of Lewiston, tell us now,” Symmonds flat-out asked. “We can end the conversation and we'll know. … I've been given permission every year, yet we are fought tooth and nail constantly to make this a success. So, is this something you want for the Village of Lewiston?”

Over the market’s first three years, Symmonds said other events were approved for Academy Park during the market’s Saturday morning hours of operation. Those happenings produced vehicles driving in between rows of vendors, “endangering the welfare of people” and “setting up days to weeks in advance, or leaving their things after their event or activity for multiple days to a week. … That has obstructed the ability of the farmers market to do its job.”

Symmonds said she’s been called names, sworn at – “Having our actual personal safety threatened” – and “having the cops called twice to the park for us just being there.”

She said the response from the village is to deal with it.

The market’s fourth season began June 5. To accommodate vendors, Symmonds requested parking spaces be reserved for the farmers from 7-9 a.m. on Portage Road. Trustees approved that request, but, “I'm continuing to have difficulties with this parking,” Symmonds said.

“As early as I can get there, there's other businesses that are (arriving) earlier than me to park in these spots.

“This is a safety issue. For these vendors, they are unable to get to a position where they can park, unload safely. And then, if during the market hours, if they need additional stuff, I can't have them running across the streets trying to get to their stuff.”

She said signage permission was not put in writing, nor were signs placed, so, “I mentioned this to this business, and do you know what he said? I can't tell you what they said, because they swore in my face and said, ‘We're going to do what we want to do, because it's public parking,’ ” Symmonds said. 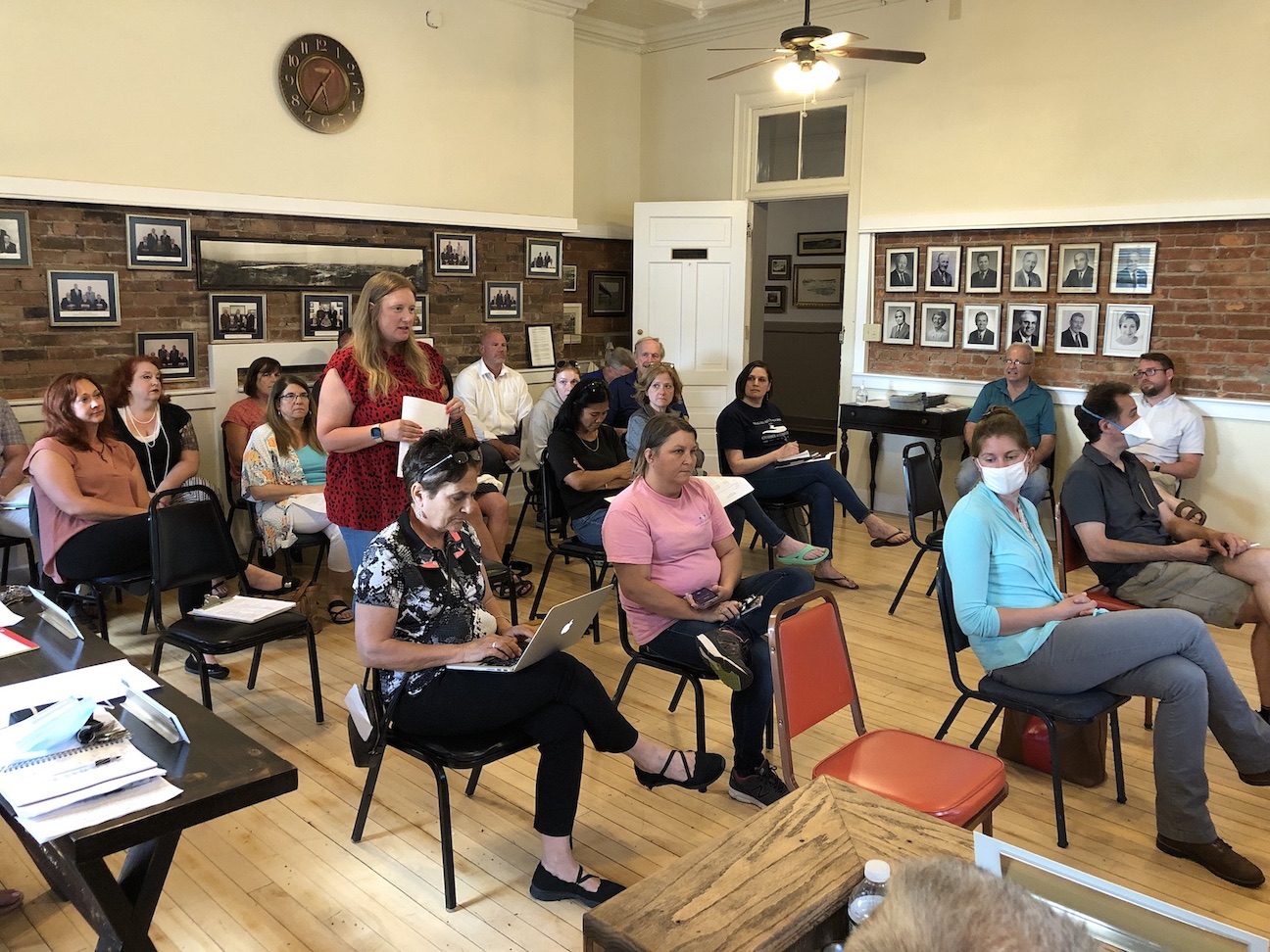 Symmonds also requested to have a 4-foot-by-7-foot portable hut remain in the park for the summer to use for storage and promotion of local businesses and events. That request was denied.

She brought the hut in on a flatbed truck for the market’s first week. It remained on the grounds for an hour after the market ended, which triggered calls from the municipality.

“I'm just wondering why it is this shed is being targeted,” Symmonds said. “I can go up and down the street and see multiple violations, and yet you're targeting this one shed – which, by the way, it was going to be removed. … I don't understand why, when I've asked for help in the past, when events have left things – large items – right in the middle of the market, not allowing us and vendors to set up. Multiple times this has happened. I asked the village for assistance. And you specifically told me, ‘Call them yourselves and handle it.’ That was what I was told.”

With regard to the storage hut, Welch said, “You left it in the park when you were specifically told you could not leave it there. I don't care if it was for five minutes or an hour or whatever, you were told not to leave it there. When your artisans leave, with their trucks – whatever they bring there – they leave with everything. They didn't leave everything there, you did – and you're in charge of it.”

She added, “It was total disrespect to this board after you were told, ‘No, you can’t have the thing there.’ And we told you very nicely. We are doing construction on the bandshell; we didn't want anything left there in the way. There's trucks; there's equipment; there's construction. We don't want anything left in that park right now, because they are working on the bandshell. And that's what you were told – twice – and you still left it there.”

Welch said she expects bandshell construction to continue until Aug. 1.

Symmonds said, “Another concern was brought to my attention. I received a very unfortunate text message from a local business here in town who has participated in the farmers market since its inception in 2018, doing activities at the park. And she was specifically told she was unable to participate this year because permission was given to a different business” to offer yoga lessons.

Welch said, “First of all, I know who you’re referring to. We had already given a facility contract for someone to do yoga in the park. You are an artisan market; you're not in business to do yoga or anything else. And the person that you're talking about – that we have accommodated also – I was not aware that she did yoga up there before.”

She added, “I specifically went up there and told her; I said, ‘I'm very sorry; I wasn't aware.’ I said, ‘But I can't have you there at the same time.’

“She needs to fill out a facility contract and show insurance just like everybody else when they use the park.”

No consensus was reached on whether two physical fitness classes could take place in the park at the same time. Symmonds noted her vendor does not offer yoga, but rather another form of exercise instruction. 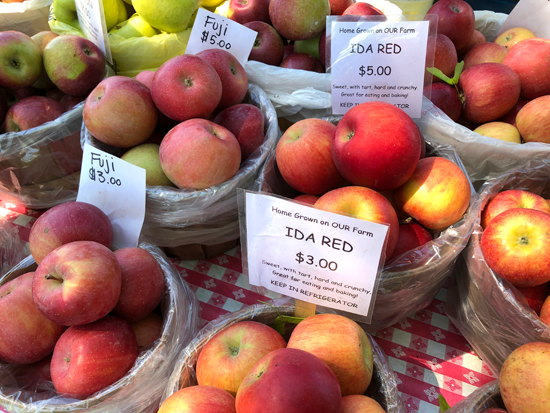 Trustees have said they want to see more use of Academy Park – and have taken steps to have the field improved. Symmonds said the farmers market utilizes the space more than anything else, yet these issues are “just the tip of the iceberg.”

“Every week we never know what we're walking into,” she said.

Welch said, “I don’t know what to tell you, Jamie, but every time you have come here, we have accommodated you. So, I just don’t understand where you’re coming from.”

Symmonds said she gets pushback when asking for additional space in the park, and with upward of 40 vendors, “It is growing to the point where I don't have any room left. I have zero room left on Portage Road side.”

“Moving forward, there has been discussion that we may need to move the farmers market – as sad as that would be – that is what we’re discussing for next year,” Symmonds said.

Niagara County Legislature Chairwoman Becky Wydysh, a village resident, said, “It's disappointing to hear that there's so much consternation between the village and the market organizers, because it is a fantastic opportunity for our businesses. They can come in; they can show their goods. Especially right now, we're all trying to build back from the pandemic and get our businesses up and running again. It gives them another outlet to show what they have and to really showcase some of their unique products.

“I really hope that you guys are able to work together. The fact that you're talking about moving the market is very disappointing. I certainly have a lot of contact with local residents with what I do, so I hear from everybody. And I've never heard a bad thing about the market. People love it. The residents, the businesses, people that come in from out of the area who then frequent our restaurants and all of those businesses afterwards. I hope that there can be some communication and you guys are able to work things out.”

Welch responded, “As far as we're concerned, we love the market. We promote it; we love it; we want it. That's why I was very surprised that she was not happy with us, because I thought we had moved in that direction to help her keep the market and everybody up there. Just because there's a shed that they can't have, it doesn't mean we don't want the market. We do.”

Wydysh said, “It sounds like you are trying to cooperate and, again, I hope that we're not watching the market move away.”

“I would love to see the market expand,” Welch said. “It's doing very well. But they have to tell us, ‘Oh look, we're gonna need some more room here,’ so we make sure they're in a safe area that they can also set up the market. If you need more room and you want to go down the Cayuga Street side or something, then tell us, ‘I need more room.’ But there has to be some communication here.”

Trustee Claudia Marasco said, “We can’t just kind of keep hodgepodging, patching this quilt together that's not working. We do not want to be the community that’s on the 6 o'clock news as having animosity with the farmers market. We're here to help everyone. We have this level of anxiety with this situation now. We need to bring it down; we need to work together.”

After the meeting, Symmonds said, “The reason I chose Academy Park in the first place was because I thought it was the perfect backdrop for a farmers market. Not just for a farmers market – I have always been a huge proponent of small businesses, and the Village of Lewiston has my heart. I do what I can to support the people, the community, the businesses, activities. I have always tried to do my best to be supportive. Having a farmers market right in the middle of the village, I thought, ‘What could be better?’

“No one really wants to see the farmers market leave Academy Park, because it is the perfect backdrop. (However,) we have been welcomed with open arms to come to other municipalities and private property within the village.

“My goal is to work with and maintain the professional relationship with the village – not just the farmers market, but with everything I do.”

She added, “Open communication is what I believe is critical to the success of anything. …

“My hope is that we can come together for the benefit of the community, because this does benefit the community as a whole.”