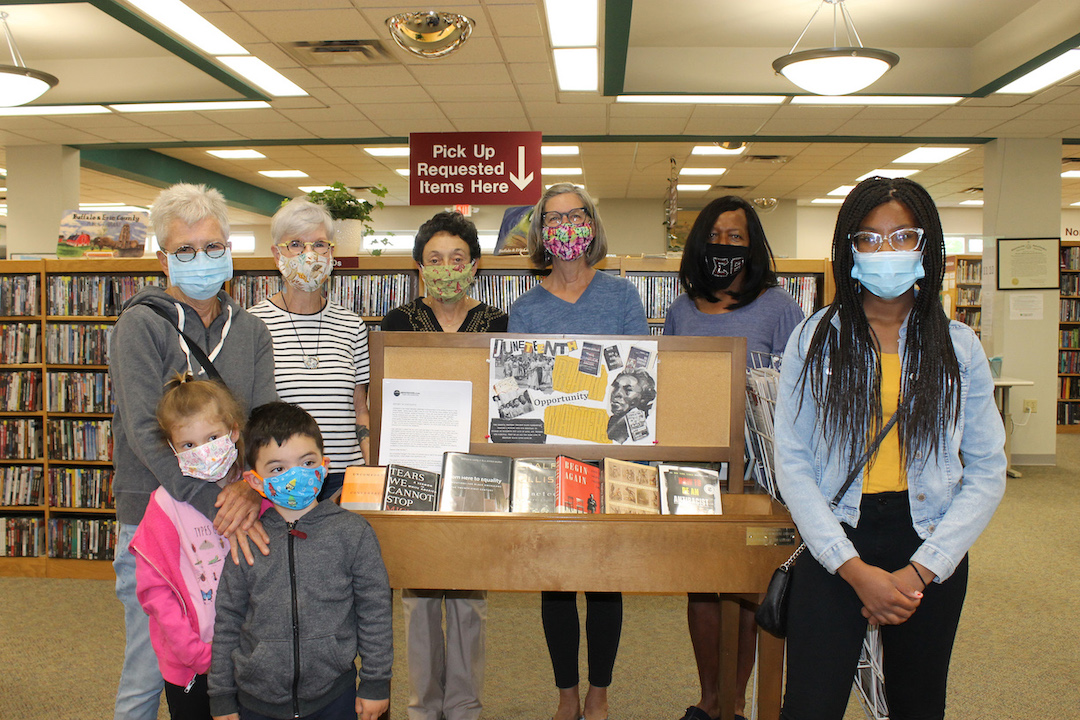 Five Grand Island women have put together an educational Juneteenth display at Grand Island Memorial Library. Specially selected Juneteenth books are available to check out all month. From left are Suzanne Tomkins and her grandchildren, Claire Dukat, 5; and Calvin Meyer, 4; as well as Wendy Brown; Celia Spacone; Nancy Savoy; Stephanie Cowart, and her granddaughter, Amayah Cowart, 12.

When President Abraham Lincoln officially freed the slaves in 1863 with his Emancipation Proclamation, it changed the legal status of millions of slaves, but it didn’t actually set them all free.

It took more than two years for the news – and the reality of freedom – to catch up with slaves in the state of Texas on June 19, 1865. The jubilation of that historic moment when Union troops brought the news is commemorated in the holiday known as Juneteenth.

That’s the true story that a group of Grand Island women want to share through an exhibit they have launched this month at the Grand Island Memorial Library.

The women want to help library visitors of all ages to learn the facts about the oldest nationally celebrated commemoration of the ending of slavery in the United States.

The delay in announcing the news has variously been blamed on murder of the messenger, or on the desire to maintain the plantation labor force, or getting in one last cotton harvest.

History has no definitive answer.

But the deeper truth may be found as the nation grapples with recent events that indicate that Black Americans may still not be free from racism and injustice.

The Grand Island women stress that education about Juneteenth is more relevant now than ever.

Reaction to the death of George Floyd at the hands of a Minneapolis police officer on May 25, 2020, has brought about police reform and raised questions about whether there is systemic racism in the United States.

New ways also are evolving to bring Black and white America closer together in an understanding of common history, common goals and overall enlightenment about the role slavery played in the nation’s history.

Amayah Cowart, 12, is the granddaughter of Stephanie Cowart, one of five women who worked on the exhibit.

Amayah reflected on the meaning of Juneteenth after viewing the exhibit: “I know that It’s the day that slaves were actually freed and that, on July 4, they weren’t really free; so that’s why we celebrate … call it Juneteenth.”

She pointed out there are crossword puzzles, worksheets and other materials that go along with the children’s books about Juneteenth. 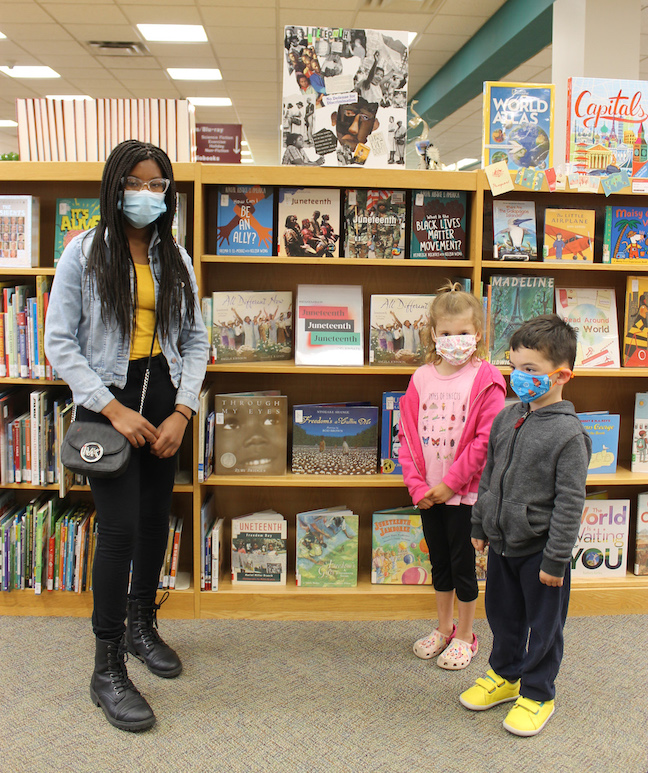 From left, Amayah Cowart, 12; Claire Dukat, 5; and Calvin Meyer, 4; in front of the Juneteenth display at the Grand Island Memorial Library, 1715 Bedell Road.

Besides Stephanie Cowart, the women who established the exhibit include Celia Spacone, Wendy Brown, Nancy Savoy and Suzanne Tomkins. Several of the women said they began developing ideas for the project on walks they took along West River Parkway.

Tomkins explained her involvement in the project: “I think, like a lot of people, I followed very closely the last year the news regarding George Floyd’s death and the trial, and the Black Lives Matter movement. I remembered that, at the conclusion of the trial, a group of Islanders, including members of Black Lives Matter, did a short video. It was largely expressing concern about the lack of diversity in Grand Island government and law enforcement.”

Tomkins reached out to Brown, Spacone and Savoy as people who were raising the issue of diversity. Together, they came up with the idea of the Juneteenth library project.

Tomkins said when they contacted Library Director Bridgette Heintz “she was very receptive and very helpful.” Tomkins said everyone in the group contributed ideas for books and handouts on Juneteenth.

Cowart spoke about the enduring effects of slavery and the lessons of then and now: “I appreciated being invited to the table with these wonderful women and I appreciate their being so thoughtful when it comes to Black Lives Matter, and the effects of slavery. Today, it’s important to note that the effects of slavery are still here. They’re still being felt today because there’s still gerrymandering and voter suppression and discriminatory practices, systemic racism that exists in society.”

“But I’m so grateful that the aftermath of the George Floyd murder has made people more cognizant, made people more open to discussing what’s really wrong in America and has set us on a track to improve it,” Cowart said.

Spacone said part of the inspiration in creating a project on Juneteenth is to counter the lack of a clear understanding of the nation’s history – what happened and what didn’t happen.

“I think Juneteenth crystalizes that, because many of us don’t realize that slavery didn’t really end with the Emancipation Proclamation,” she said.

Spacone added that, because of the delay in notifying the slaves, “People were not able to celebrate after a while because of Klan involvement and repression. Just since the Civil Rights movement has Juneteenth been a true celebration.”

Spacone noted Heintz and children’s librarian Carly Spatar were very helpful bringing the project to fruition: “We hope people come and see this and read and learn about what has happened.”

Savoy pointed out the whole state now has Juneteenth as a holiday: “We didn’t want it to be an empty holiday, like, ‘Oh, I got a day off,’ but why we have this day off and what are we honoring. I also think that, personally, the more that we read, the more you understand on a deeper level.”

Brown contributed the collage posters that draw attention to the children’s and adults’ Juneteenth book displays.

“I think this was a great opportunity to expose kids to the issues with slavery and things that still continue to this day; so I was kind of excited to do the art role because I’m hoping that through art you can educate people and get people thinking in a different way than you might gather from reading a book,” Brown said.

In making the posters for the display, Brown looked for a strong central image for each of her collages.

“Hopefully, it’s kind of thought-provoking and they read something about it and then maybe it makes them choose the book that gives them some better understanding,” she said.