Participants and observers alike expressed a sense of pride, patriotism and unity at the DeGlopper Memorial Dedication Ceremony on Saturday, June. 5.

For relatives of Pfc. Charles N. DeGlopper, the day was a long time coming, but brought a sense of completion. With the crowd there for the unveiling of the statue of the Medal of Honor winner who gave his life for his fellow soldiers in World War II, it was clear that his hometown was grateful for his heroic sacrifice and proud of his bravery.

On June 9, 1944, DeGlopper, a member of Company C, 325th Glider Infantry, saved members of his platoon from death at the hands of their Germany enemy in LaFiere, France. He sprayed the hostile positions with assault fire and, gravely wounded, kneeled in the road and kept firing until he was killed.

Relatives of 17 Grand Island soldiers also killed in action expressed a belief and thankfulness that their loved ones will always be remembered in the plaques that now display their photos and heroic actions on behalf of their country.

A core group of Islanders has worked for five years to ensure this tribute would occur, be witnessed by many and be remembered always.

Ray DeGlopper, Charles DeGlopper’s nephew, addressed the crowd after the statue unveiling to describe the process of mapping out the DeGlopper Memorial and raising the funds for a statue, the KIA plaques and other aspects of the Memorial Expansion Committee’s work.

“The development of this project moved along with grateful donations of time, money and effort. This project has been funded primarily by Grand Island residents,” he said. “As we admire the components of this memorial site, we recognize the generous contributions of material, labor and the elements both seen and unseen. Representatives as young as the Boy Scouts, the high school students to our older residents were involved with every aspect of this project.”

He thanked local businesses, Grand Island service organizations and veterans groups – the VFW, the American Legion and the Moose Lodge – for their support.

“The members of the DeGlopper and Killed In Action families will be forever indebted to this monumental effort put forth by the DeGlopper Memorial Expansion Committee. With the support of our wonderful Grand Island committee, a heartfelt thanks to all of you,” DeGlopper said to the crowd of hundreds who came to pay tribute to their hometown hero.

It’s likely that no one has worked longer to bring about an Islandwide tribute to DeGlopper than Joseph Synakowski. “Twenty-seven years – since 1994,” he said he’s been working on the honor.

He helped organize a parade for DeGlopper on the 50th anniversary of his death, June 9, 1994.

“The Niagara Frontier Chapter of the 82nd Airborne – we decided to give Charlie a tribute,” Synakowski said. “We had a nice parade … we had a display in Trinity Church.”

In 1997, Synakowski met a member of DeGlopper’s company who was there on the day when Charlie DeGlopper lost his life. Capt. Pierce and another soldier from the company recommended him for the Medal of Honor. Synakowski said Pierce told him, “What Charlie did was one of the bravest things he ever saw.”

Now that the statue of DeGlopper is in the middle of the park, “Nobody will ever forget him,” Synakowski said.

Susan Geissler of Youngstown, the sculptor who created the 7-foot bronze statue of Charles DeGlopper, awaited the unveiling with a case of nerves.

“It must be like standing on stage and you get stage fright. It’s so personal, when you make a sculpture from your innermost soul and your heart and you hope everybody likes it,” she said after the unveiling. “It feels good to make Grand Island happy, and especially the DeGloppers. I’m honored, really. It’s pretty special.”

Geissler said when she did the research for the image, she looked at photos of DeGlopper, saw a resemblance in family members she talked to, and began to get a growing sense of his spirit and character. “I’m just trying to imagine what it took, where he just didn’t even have to think, he just did it for his comrades. So that wells up in you when you start thinking about such a young man who just did it.” She said it becomes a heartfelt story “and it comes out in the sculpture.” 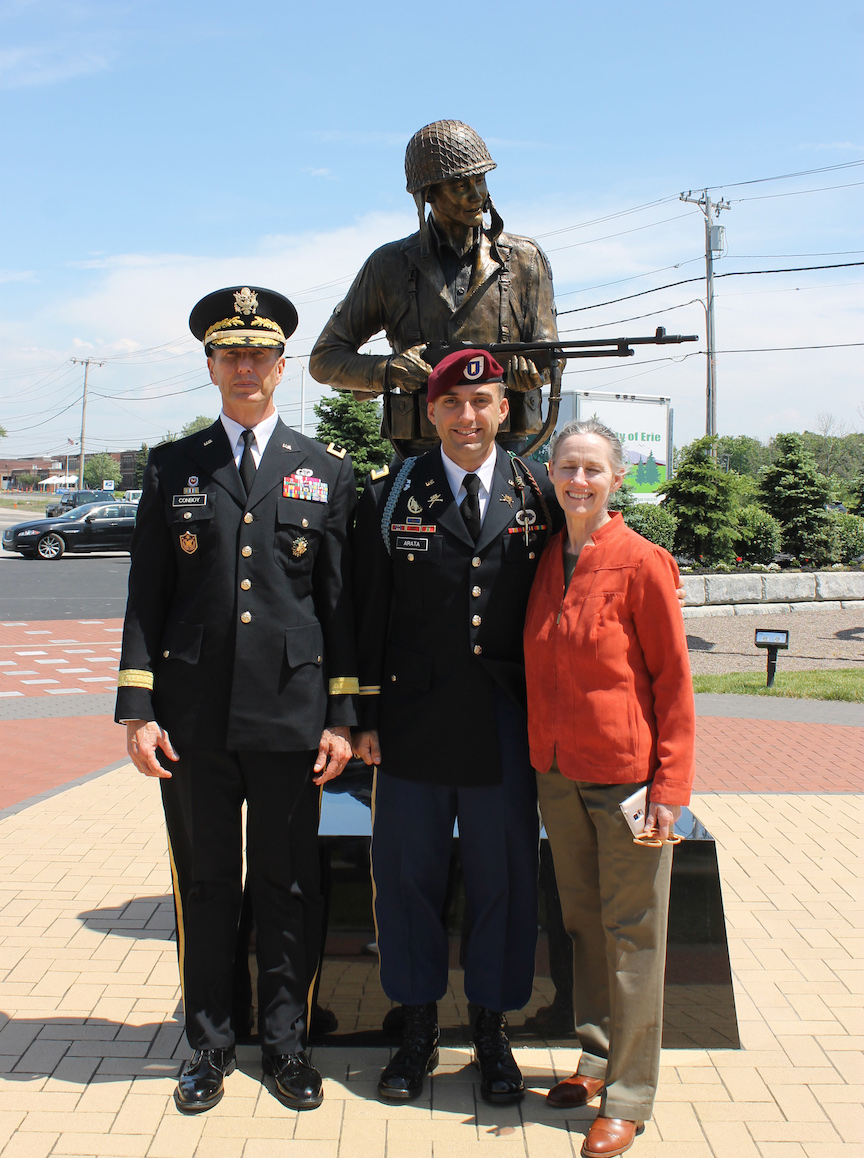 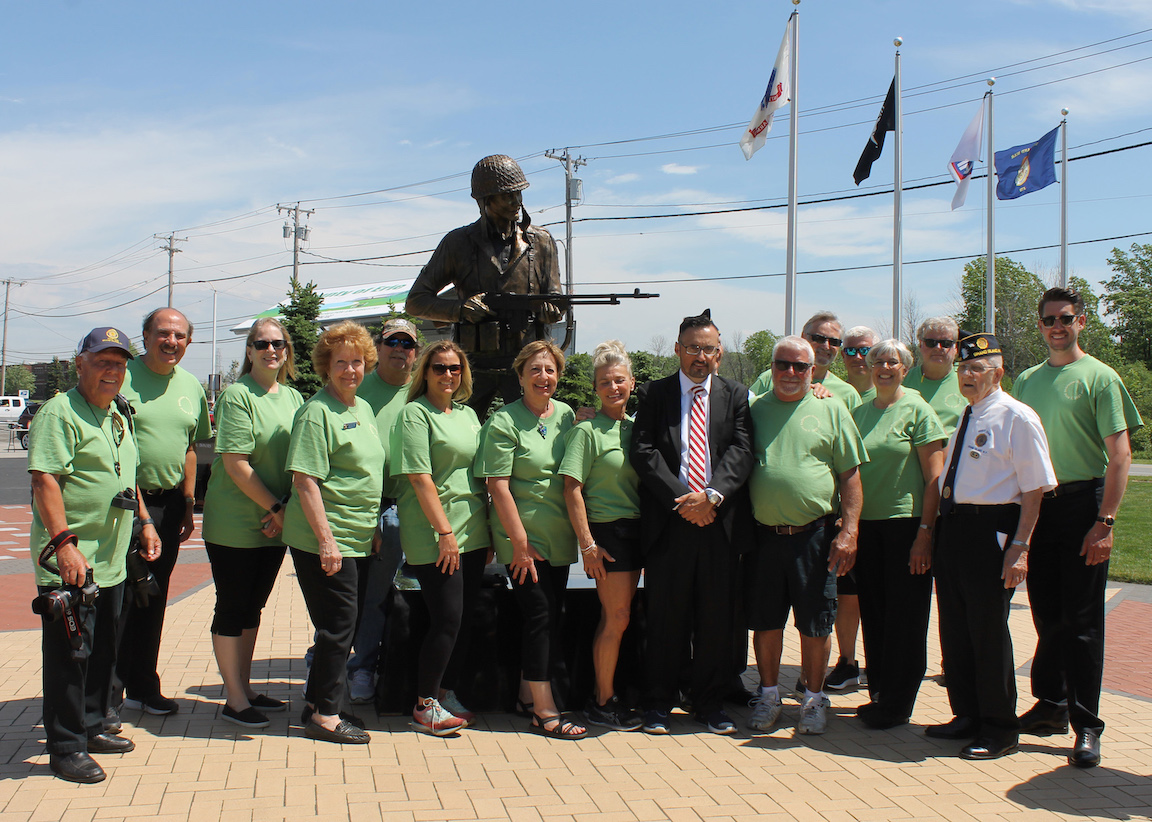 Members of the DeGlopper Memorial Expansion Committee stand in front of the new statue of Pfc. Charles DeGlopper. (Photo by Karen Carr Keefe)

Chris DeGlopper Banks is the great-niece of Charles DeGlopper. The day was very special to her.

“It was a wonderful, heartfelt day because I got to see so many of my family members together in one place,” she said. She has done her own research because she wanted to know more about how her family dealt with DeGlopper’s death. “My father, who was born Robert Clinton (DeGlopper) in February, was renamed Robert Charles after Uncle Charlie died. The story is that my grandparents talked it over and they went to my great-grandfather and they wanted to do this. And my great-grandfather said, ‘It would be nice to have another Charlie in the family.’ ”

DeGlopper Banks learned in her research that, within the space of 10 years, her great-grandfather lost his older son to tuberculosis, his wife from a heart attack, and his youngest son to the war. She wanted to know “how it felt for him to have this new baby, new grandson in his arms, named after his son. My father had a special relationship with my great-grandfather.”

Maj. Gen. David Conboy (Ret.) of Grand Island gave the welcome and introduction speech for the dedication ceremony. After the ceremony he talked about what it meant to him.

“It was an honor for me to be a part of it and I’m just amazed at the hard work of the committee, the support of all the Grand Islanders and the understanding of the importance of the sacrifice of Pfc. DeGlopper, our other 16 Grand Islanders who were killed in action and everybody who served in the military,” he said. “We understand that freedom’s not free. And to see a great turnout is amazing; and to have this enduring symbol of what it means to be an American soldier, to give your all, is something that we treasure today. But in the future, visiting with family members and others, it’s really hallowed ground that we can visit and reflect on the service and sacrifice of so many.”

Arata said, “Everywhere you turn, you see the DeGlopper name at Fort Bragg, which is awesome. There’s DeGlopper Field, where we do a lot of tactics and parades on; there’s the DeGlopper Air School, which is shut down; the west and East DeGlopper Street, where you see soldiers running every day; and then the DeGlopper room in our dining facility.” DeGlopper was in Company C, 325th Glider Infantry.

“On the anniversary of his death this year, our company, Charlie Company, will be honoring Charles DeGlopper by starting a road march at 4 a.m., the same time his patrol left out on June 9, 1944,” Arata said. “We’ll be carrying 77 pounds of equipment that marks 77 years since his passing. We’ll go through a bunch of physical events ending at the division War Memorial Museum, where there the division historian is going to teach a class of the Battle of LaFiere, the importance of it and the importance of Chares DeGlopper’s actions in securing the bridgehead at LaFiere Causeway, and then finally, the company is going to take a photo in front of a C47, the same aircraft that would have towed the glider into Normandy.”

Former Town Board member Gary Roesch was on the Memorial Expansion Committee from the start. He said everything came together beautifully for the day, including the weather, and the event was so well organized: “Everybody that wanted to help is volunteering – it just makes the job so much easier and so much more rewarding. Probably the most important part is the DeGloppers. Seeing the whole family together. And the individual from France (French Honorary Consulate of Buffalo Pascal Soares), that was awesome. Having the French ambassador here with us, it really meant a lot. I’m just so happy that I could be a part of it.”

Soares spoke of his country’s gratitude for DeGlopper’s sacrifice to save his comrades under attack as they tried to secure a bridgehead cross the Merderet River at LaFiere, France.

“Everything has been bringing people closer together,” Roesch said of the ceremony. “And we need this after last year. This is probably the biggest event that Grand Island’s ever had.”

Town Supervisor John Whitney said, “I’m very proud that we were able to have this beautiful day and all the people come together and put forth the effort over the past five years to make this expansion what it is. It’s beautiful. … I think the energy is palpable. It was fantastic.”

Karen Vanthoff is the niece of Pfc. William L. Rohde, who was killed in action on Oct. 21, 1945. Rohde served as a radar technician in the remote but strategic post of Kiska in the Aleutian Islands Alaska. When World War II ended in September 1945, Rohde and eight others were on board a plane returning to the U.S. when it crashed in the Aleutian Islands. All on board perished.

“I never got to meet my uncle. My mom was pregnant with me when he was killed. But I used to hear a lot of good stories about him. My mom and my aunt used to talk about it, and I felt like I knew him,” she said. “We didn’t know for a long time where he was actually buried. Finally through some investigation we found out that he was buried in Missouri because he was killed in a plane crash.”

Vanthoff said the ceremony meant a lot: “I thought he finally got the recognition that he probably deserved, just like all the other people that have given their lives – and it’s so gratifying in this day and age, with so many people not being very kind to each other – with all of this going on now – it’s a wonderful tribute to people, that we still care, that we love this United States of America. It’s a wonderful place to live in, and I wouldn’t live anywhere else. Say ‘God Bless America!’ ”