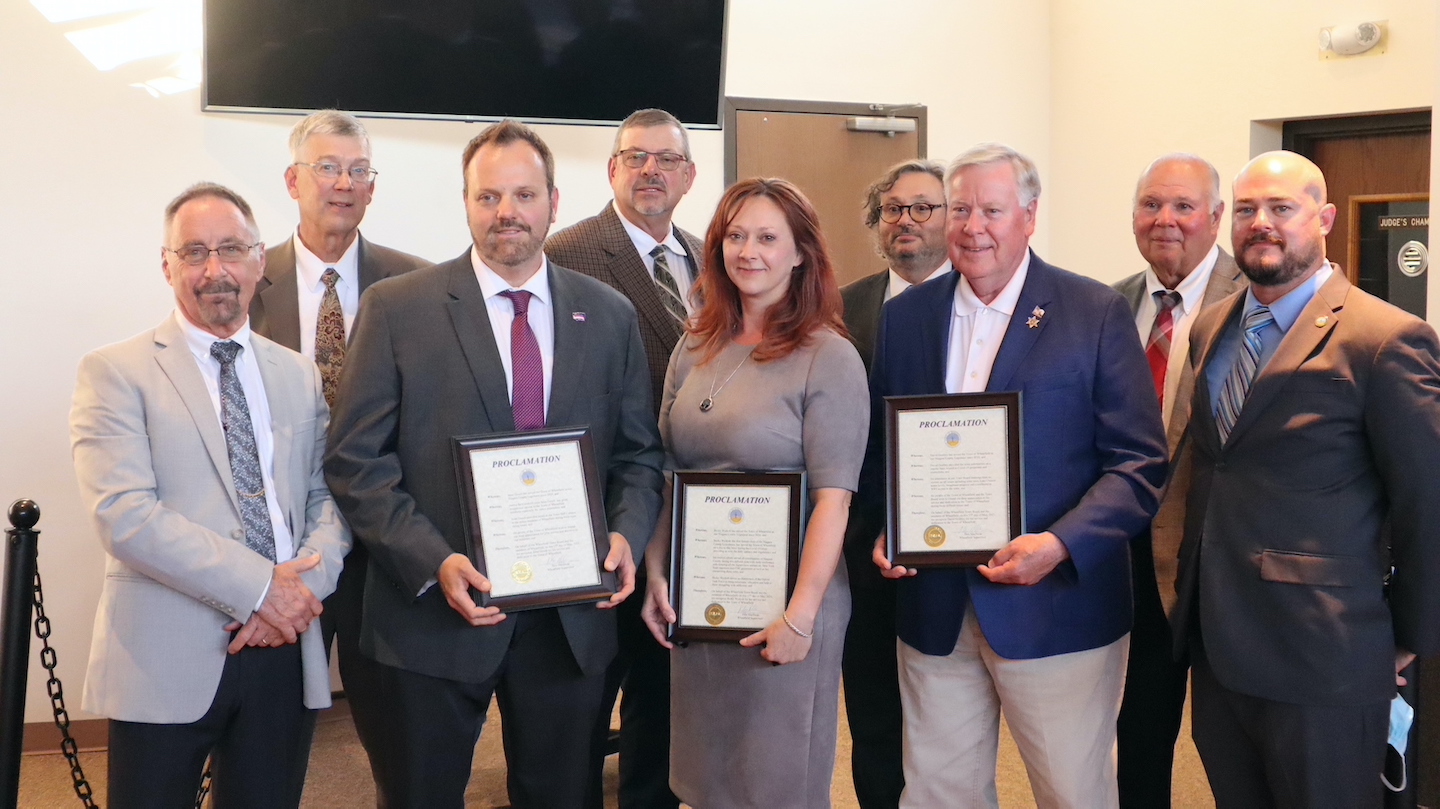 Town Supervisor Don MacSwan thanked Wydysh, the first female chair of the Niagara County Legislature, for her work providing updates and information throughout the pandemic, as well as her work on the county’s opioid task force.

“Thank you so much for keeping me informed and all the county informed. It truly was appreciated. Without you, it would have been so difficult. You were a model for everyone,“ MacSwan said. “Everybody thinks back about COVID – it caught all of us off guard. Nobody expected the severity. … And you truly were a model for all the communities for what you did and I will not forget what you did for us.”

Wydysh joked, “We’re not used to getting proclamations, we’re used to giving them.”

She went on to say it was an honor and called the teamwork she witnessed and experienced from Niagara County communities “truly great to behold.”

Godfrey was also thanked for providing the town with updates and guideline restrictions on a regular basis, as well as his regular attendance at Town board meetings and his efforts to bring free public Wi-Fi access to Town Hall.

“I got three towns, and (Wheatfield) is the greatest – not because of you,” Godfrey joked to MacSwan. “But sincerely, we made it through this together, the worst part. We got a little ways to go, but it’s all about the people; and you guys (Town Board) are great and I want to thank you.”

Gooch was thanked for his “Meals From the Heart from Six Feet Apart” program, which provided low-cost meals to seniors in the Wheatfield area on a number of occasions during the pandemic.

“When we first talked about the meals, I was hesitant (due to COVID-19 regulations),” MacSwan said. “But I’m going to tell you, it was a big hit for the residents – what you did for the seniors – and it was really something to see you out there in all types of weather passing out meals, and you did a great job.”

Gooch called it a team effort and thanked Gail Connery and Arlene Mante of the Senior Center for handling phone calls and logistics, local businesses in the area that provided food, and the volunteers who helped.

New subdivisions would eliminate temporary dead-ends in favor of cul-de-sacs. However, instead of the traditional symmetrical circular shape, the newly designed cul-de-sacs will be “side bulged.” All of this is in effort to reduce resources and effort used to plow and repave these areas, while also making it easier for school buses and emergency vehicles to use.

Highway Supervisor Paul Siegmann later said, “I appreciate your support and then amendments to our subdivision rule. … We have 58 cul-de-sacs in town and another 22 dead-ends. That’s a lot of maintenance. Averages out 10 per each truck just in plowing.”

On the issue of individual grinder pumps, Zuber explained the town has many of them in use and they frequently cause issues for the sewer department.

“(New developers) will have to put in their own kind of centralized gravity collection system and have a centralized pump station that then pumps that out to a gravity sewer somewhere else that has enough capacity,” Zuber said. “What that’ll do is – I don’t want to say eliminate, but it’ll help control the subdivisions in the areas that we don’t have good sewer coverage in that have pressure sewers. It’ll keep those pressure sewers that are existing from being over capacity and it’ll help reduce problems with those in the future.

“Now, the town will still allow individual grinder pumps. A lot of places where there may only be pressure sewers, there are lots that can be developed and they could still be developed and still have a grinder pump put in. But this is really more so for the bigger subdivisions. And not only will the subdivision developer be responsible for the design and the cost of installation of that pump station, but they’ll also be responsible for putting in generators for backup power.”

Emphasizing the point, Water and Sewer Supervisor Richard Donner explained the problem is leading to some foul situations in some areas.

“As far as the pressure sewers and the grinder tanks,” Donner said, “We’ve had two calls in the past week where pressure sewer dumps into gravity sewer; there’s gotta be a manhole where that happens. And we’re getting odor out of there and people are complaining. The warm weather hits, people want to open their windows. Now guess what they’re smelling? So we’re out trying to flush the systems; trying to put some sewer sweetener in there. It does as good as it can but, if you’re the person there with your window open, you’re not a happy camper.”

Regarding the overall changes, MacSwan noted, “It’s going to cost the developers a little bit more. But in the long run, it’s the best thing for the residents of the town.”

He went on to explain how and why the issue began.

“(Back) when I was building inspector, we went through the Town of Wheatfield trying to sewer the entire town. And because of the total cost of the more rural areas, (the Town Board at the time) elected to go with a grinder pump. Now, we’re paying the price,” MacSwan said.

Wheatfield determined the proposed projects will not have a significant adverse impact on the environment and therefore issued each a negative declaration under SEQR.

Zuber explained the program covers repair costs to bridges up to 95% of authorized project costs (up to a maximum award of $5 million), while culverts would be funded 100% (up to $1 million).

The town will hold a Memorial Day celebration at its veterans memorial behind Town Hall at 11 a.m. May 31. MacSwan announced he will sell copies of his book, “Doc: A Combat Medic’s Story,” which was authored by his son and chronicles his experiences during the Vietnam War, for $10. Proceeds will go to the Wheatfield Veterans Memorial Committee, which spearheaded the relocation and renovation of the town’s memorial.

The next town board meeting will be 7 p.m. June 7. Prior to the meeting, at 6:30 p.m., the board will issue a proclamation for a long-time town employee, Richard Muscatello. At 6:45 p.m., there will be a Niagara County IDA presentation.