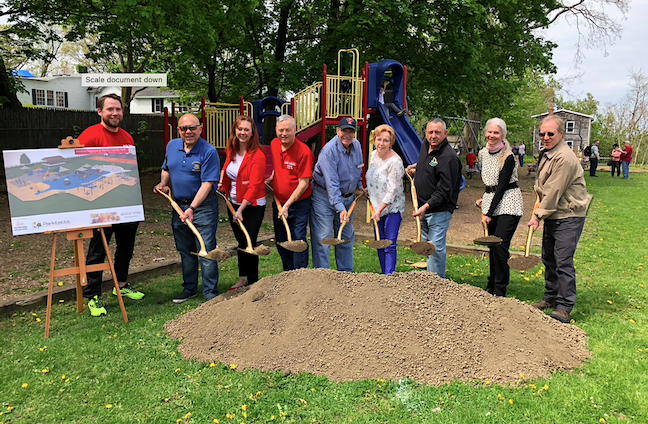 Local, county and elected leaders joined together Sunday for a groundbreaking ceremony at the site of the soon-to-be-built inclusive playground at Marilyn Toohey Park in Lewiston.

Elected leaders joined together Sunday to break ground on the Village of Lewiston’s inclusive playground at Marilyn Toohey Park. A ceremony was held at the end of the 25th annual Spring Fling event for children.

Mayor Anne Welch said the Department of Public Works recently put in a sewer line behind the Red Brick Municipal Building and will soon add a dedicated water line. Additional field prep and infrastructure work will take place over the early part of summer, with equipment setup in August.

“We’ve paid for everything so far. All the playground equipment and the splash pad is paid for,” Welch said. “Now we just need to get the rubber surface.

“Cerrone is doing just about everything, with all their people that they coordinate with.

“We've had a lot of people step up to say, ‘I'll do whatever you need me to do.’ Like Dave Webb for the concrete. Dave Rulli wants to do electrical. Just a whole bunch of people – landscaping and stuff. We have a lot of community help.

“And then in August … we are going to schedule a ‘community build.’ We're gonna invite all the people to come out and help us put it all together.”

With a dozen or so community volunteers, it’s expected the park will open within a week or two of ride installation.

“I would have liked to have it done in June (2020), but with everything – we were supposed to do it last year, but that didn't work out with COVID,” Welch said. Still, “I'm pretty excited about this. This is something I wanted from day one when I was elected. I said, ‘I want to build this playground,’ and it's finally happening.”

She thanked those businesses and residents that have donated toward the $750,000 project, as well as the Town of Lewiston and Supervisor Steve Broderick for helping secure a $200,000 grant from the Greenway Commission.

The village is still awaiting $250,000 from the New York State Dormitory Authority, which was awarded when John Ceretto was Lewiston’s assemblyman.

Welch said another $100,000 in donations would complete the protective rubber surface purchase and enable construction of a pavilion. 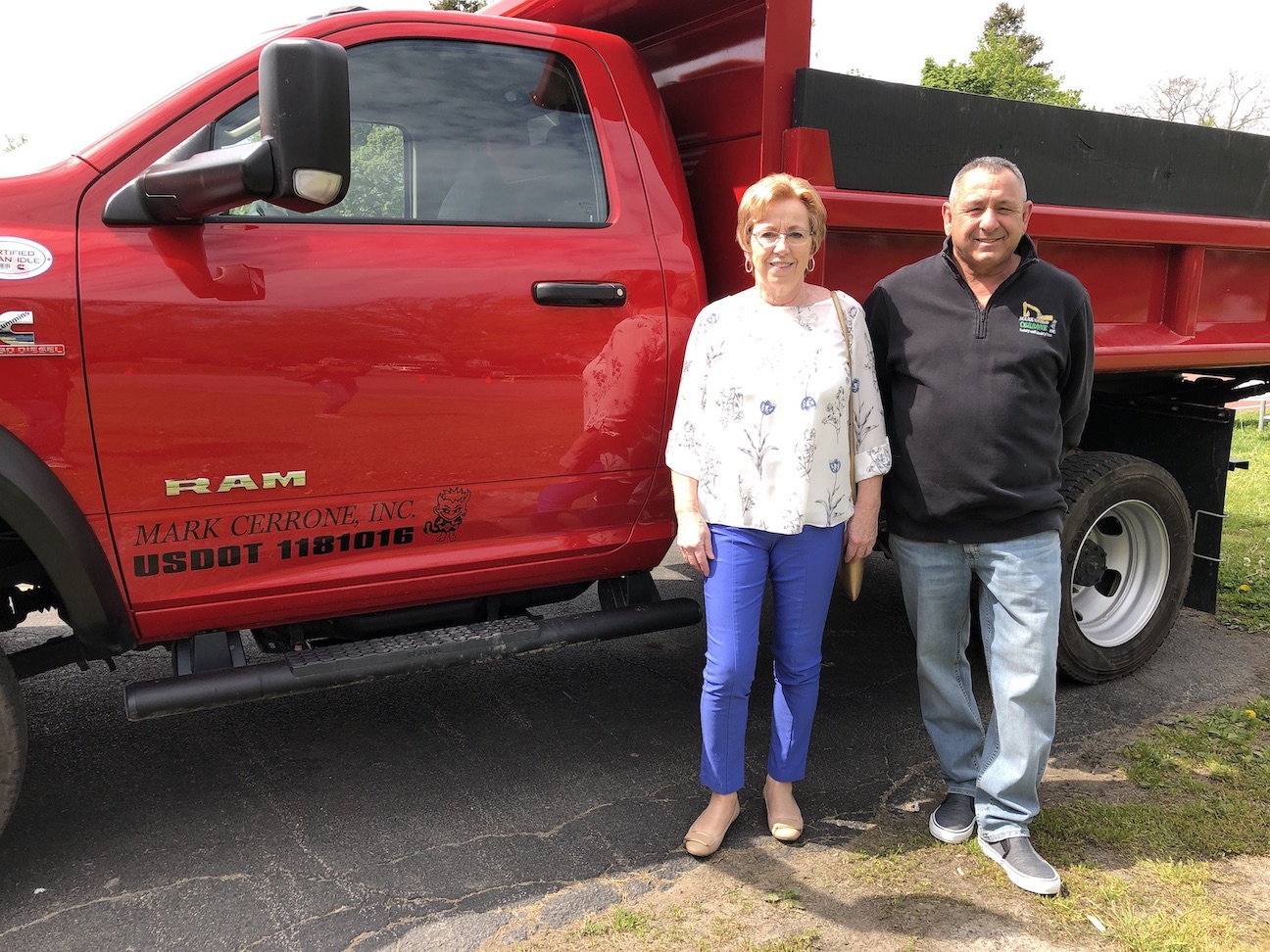 “I think we're gonna do just fine,” she said. “Cerrone has really stepped up” donating time and services. “When I first said I wanted to do this, (owner/Vice President) George Churakos came to my office and said, ‘I’m going to build you a playground.’ ”

At about 14,000 square-feet, the inclusive playground will provide a welcoming recreational area for children of all abilities. Plans call for enhanced safety and shading features; sound, motion/movement and sensory-sensitive areas for kids with special needs; musical instruments; "buddy" swings, We-saw seesaws and wheelchair-accessible slides; a seated zipline; open green space to interact or just stretch; and a splash pad.

Assemblyman Angelo Morinello said, “All playgrounds are now designed for those that have difficulties. So, it's really important for Lewiston for a number of reasons. No. 1, people move to Lewiston because of the advantages; because of the community. But the amenities they also look for. So, when you do an all-inclusive park to help, first of all it shows that you're moving to the next level – you're recognizing those that need additional assistance – but you're also expanding the experience for all children in the area.”

Niagara County Legislature Chairwoman Becky Wydysh said, “What a special project for the kids of Lewiston. There's so many kids who just need some extra help to be included, and to be able to play and be happy and get out here in the playground with their friends and their parents, and this is going to help them do that. And we expect not just kids from the Lewiston area, but I think you're going to see kids from all over the county – maybe even other counties – be able to come and enjoy this special playground.” 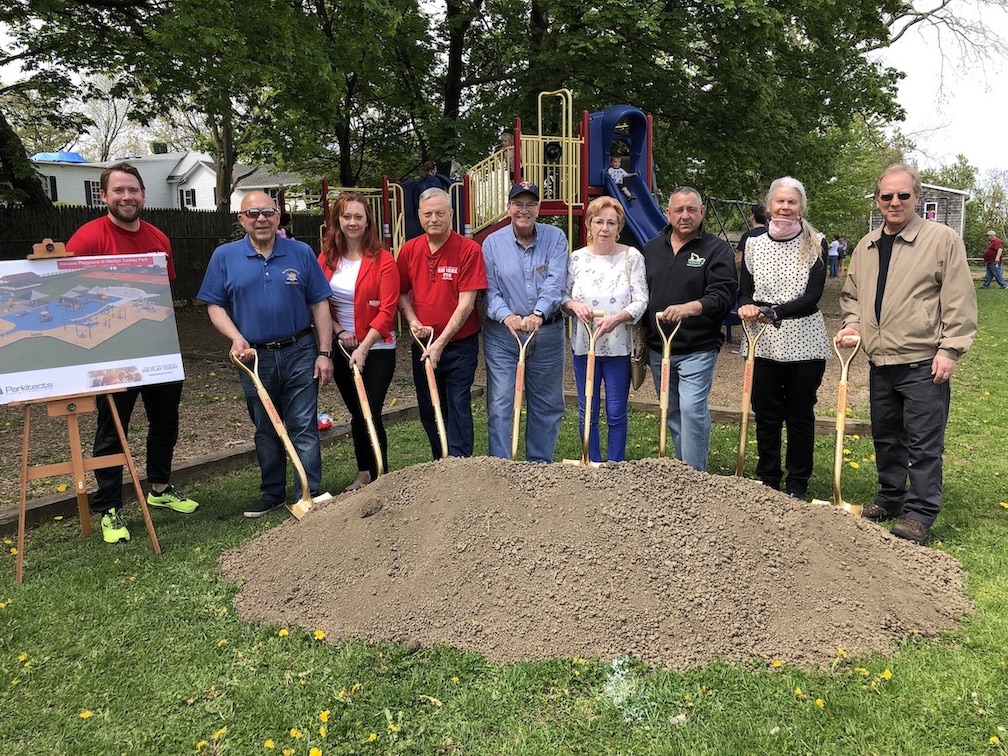 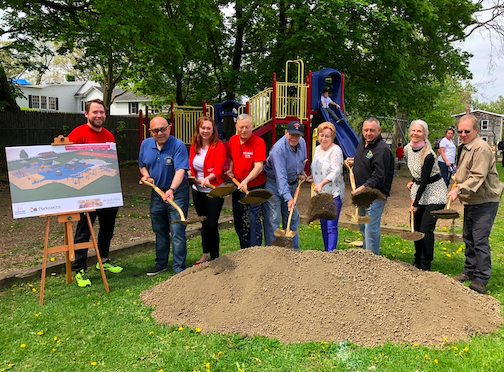 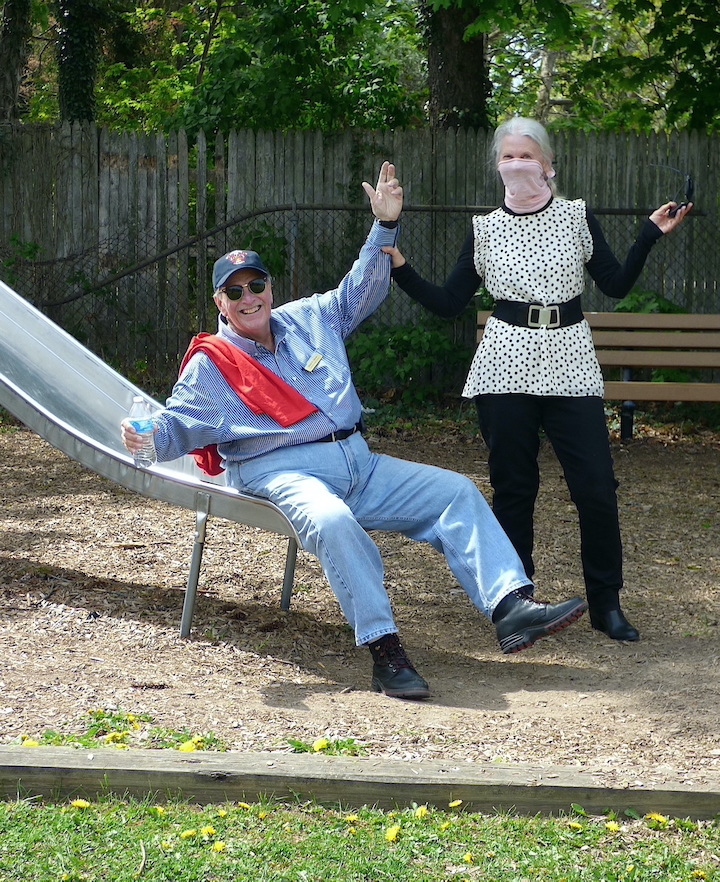 Village of Lewiston trustees Dan Gibson and Claudia Marasco have a laugh on existing playground equipment. 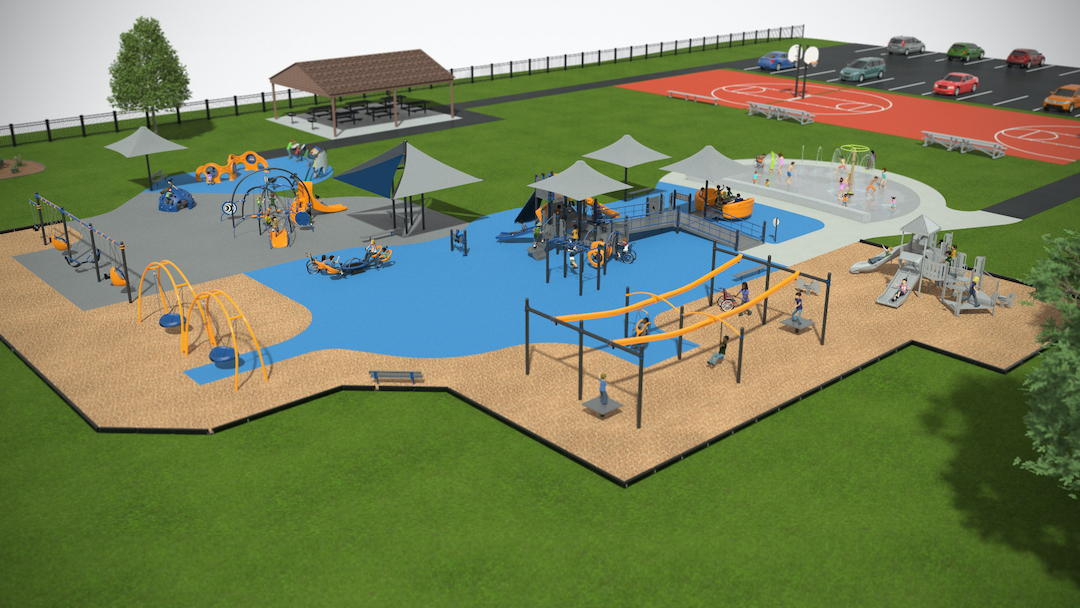 An artist's rendering of the inclusive playground, courtesy of Parkitects. 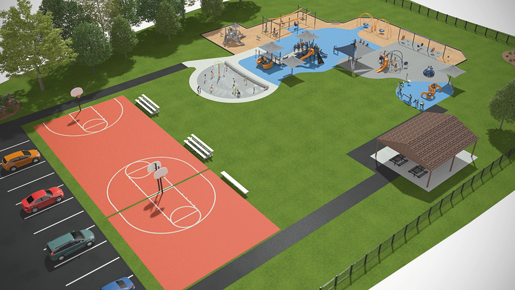 Prior to the ceremony, dozens of children were at the Red Brick playing games. About 125 participated in the Spring Fling one-mile “fun run.” Activities were coordinated by the Recreation Department.

“We had a great turnout; saw a lot of smiling faces, and we were very pleased with that,” Director Brendan McDermott said afterward. 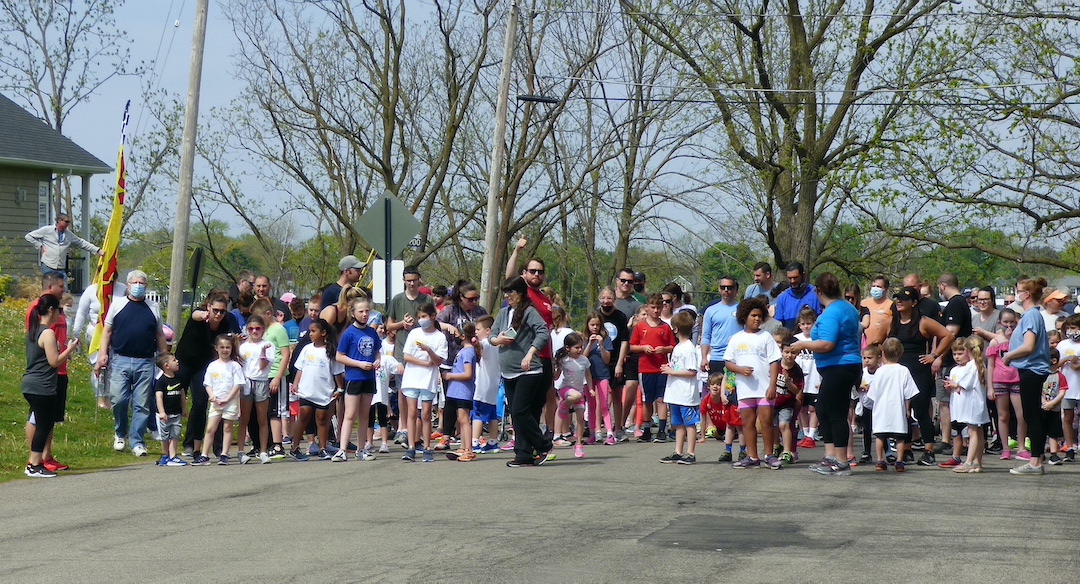 Children give it their all at the Spring Fling one-mile “fun run.” 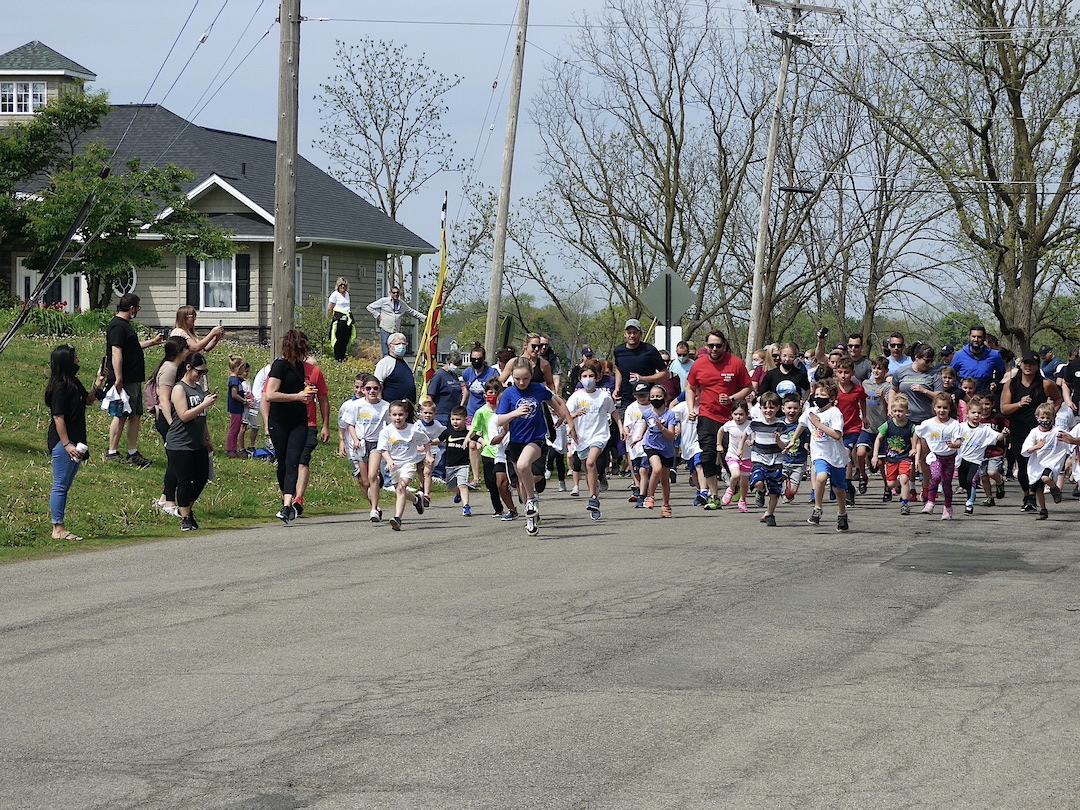 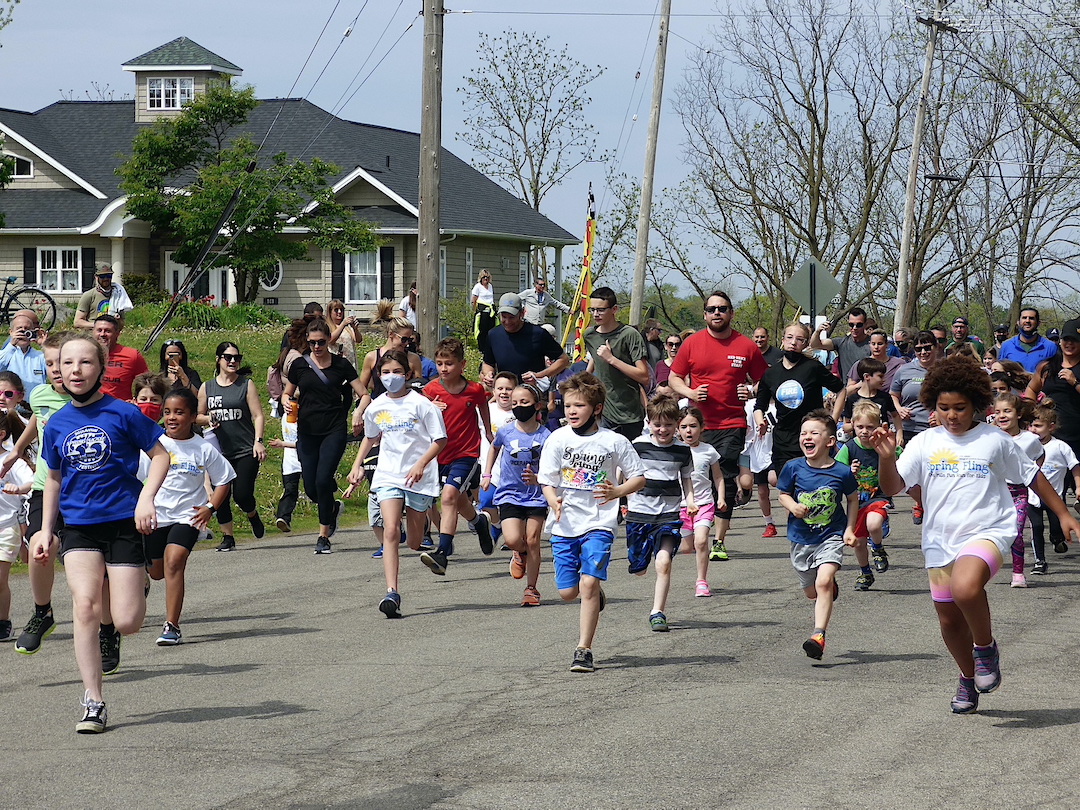 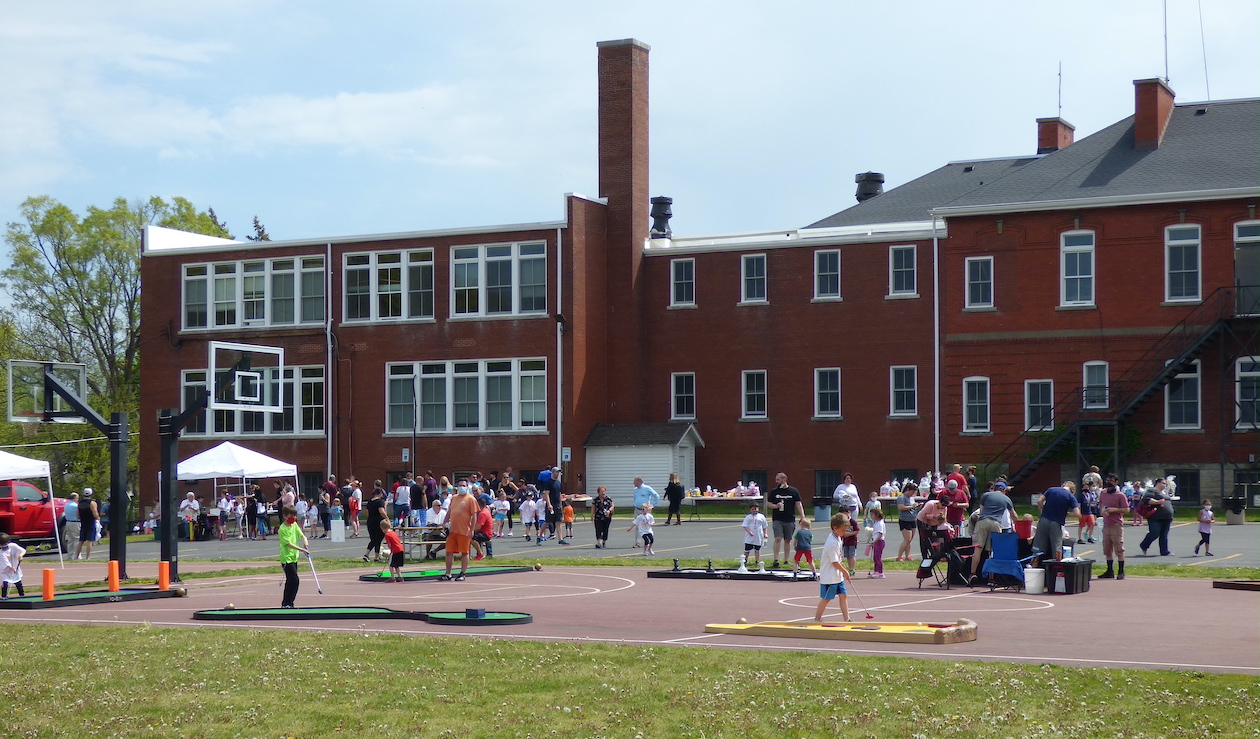