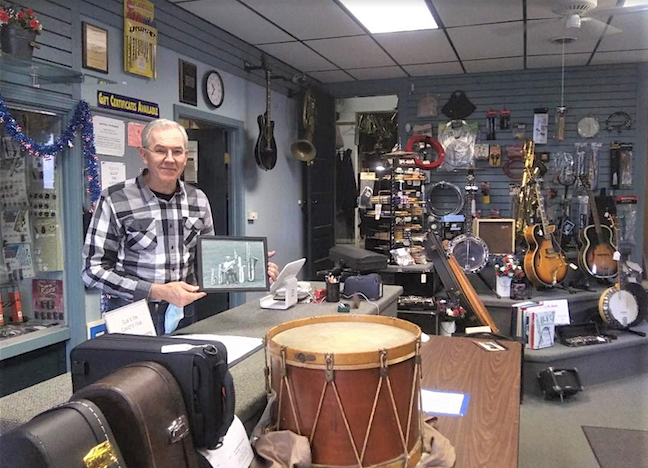 Steve Wingrove of Alder Creek Music shows off a picture portrait of master saxophonist Sigurd Raschèr (1907-2001) along with what was his largest and possibly most interesting commission of all time - a rare, 8-foot tall, Contrabass saxophone. Alder Creek is set to close July 29. (Photo by Justin J.M. Higner)

Behind every band and performer, there have been specialists like Steve Wingrove of Alder Creek Music (2880 Niagara Falls Blvd.) helping to make the instruments last at least as long as their owners.

Now, after 52 years in the business of instrument repair and sale, Wingrove is retiring. The store will be offering special sales and discounts until it closes July 29.

“My hands have been telling me it’s time to take a break from the repair end of things,” Wingrove said. “You know, I was one of those lucky people who loves what he does. But I want to enjoy some life. I know a lot of repair technicians over the years that are no longer with us that worked right up until the end and I’m not gonna let that happen.”

He says he’s looking forward to having more time to do some woodworking and taking more trips with his wife, specifically to places out west he had visited in his youth such as Yellowstone, Yosemite and the Grand Canyon.

During his career, Wingrove, who specializes in brass and woodwinds, has served everyone from beginners to professionals with their band instrument repair needs. Over the years, he has become a lone operative servicing the instruments for many Western New York school districts.

While Wingrove leaves behind a career to be incredibly proud of, it’s for this reason he said he feels somewhat guilty in retiring. He’s so far been unable to find a buyer for the store with the experience necessary to continue providing for area schools and explained there’s a national shortage of trained band instrument repair techs.

“The big school districts in L.A. and Chicago are snapping up a lot of the people graduating from the repair schools,” Wingrove said. “But I’m hoping to find someone to replace me; someone who has got some experience in the repair field to move in and take over my shop.”

Wingrove’s experience began at a young age. He worked at local music shops, including his father’s Payne Avenue music store where the band director from nearby Payne Junior High School also taught lessons.

“He couldn’t get repair techs on-call for the school, so he was doing a lot of the repairs himself. I had some time to kill and, after I finished my own work, I started dabbling,” Wingrove said. “He showed me how to put clarinet tenon corks on, and pads and stuff like that. Then I got myself a repair manual and started doing other things. Next thing you know, I had all kinds of people bringing me things.”

Eventually, he needed to expand to a new location. Wingrove purchased the old firehall Alder Creek resides in and, by 1990, officially opened.

Wingrove’s work has allowed for some truly one-of-kind experiences. He shows off a photo of master saxophonist Sigurd Raschèr (1907-2001) along with what was his largest and possibly most interesting commission of all time – a rare, old-style, 8-foot tall Contrabass saxophone.

“At the time, they did not make those (especially) large wind key caps anymore, so I had to make them here,” he said. The sax is one of only four remaining of its type that is actually still playable. It’s now in residence at Fredonia University.

His career has also allowed for some endearing connections with people, some of which just happened to be some of the area’s best musicians. One name that stands out is Dick Griffo – a prominent jazz musician from Tonawanda who performed with legends including Tommy Dorsey and Woody Herman – who began teaching lessons at Alder Creek in 1990.

“Shortly after he started here, he came up with the idea to start a community band (The Dick Griffo Jazz Workshop). I supplied the music stands, the chairs and the room; he supplied all the talent,” Wingrove laughed. “He wrote charts that were easy for kids to play, but left room in there for the more advanced players to take solos. He was just a real, real talent, and we spent a lot of years together.”

Griffo ran the band upstairs at Alder Creek until his death in 2012.

“He was like a brother to me,” Wingrove said. “He was such a big contributor to music in this area. A lot of his students went on to be in bands. And I was happy to be a part of that.”

Wingrove said it’s those kinds of connections and interactions with people, particularly musicians, he’ll ultimately miss the most.

“I’m a people person. I could chat with the people all day long, but I wouldn’t get anything done,” Wingrove laughed. “I’ve gotten to work with a lot of professional musicians that I’d otherwise never have even talked to and that’s been really fun. So many great musicians, from L.A. players to band directors and stuff. It’s been great. ...”

“The circle of musicians, it’s got some web to it. It touches and connects so many people. And I really feel glad I’ve been able to help keep instruments in kids hands over the years so they can get involved with it.”