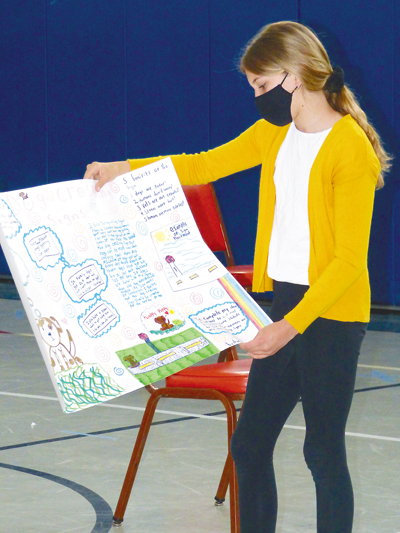 Village of Lewiston Mayor Anne Welch presented a certificate of appreciation to Charlotte Ryan prior to Monday's work session. The Lew-Port fourth-grade student asked elected leaders to install dog-crossing markers. Charlotte was joined by family, friends, teachers - and, of course, her bernedoodle, Whitney.

Lewiston’s turn-of-the-century streetscape project highlighted its walkability, with better sidewalks and the addition of traffic-slowing crosswalks. On Monday, the Village Board extended pacing privileges to man’s best friend.

Welch said, “We have new dog-crossing stickers that we will place on our pedestrian crosswalk signs on Center Street and some of our stop signs.”

Charlotte’s teacher, Christine DuMoulin, wrote the board, stating, “Charlotte, one of the fourth graders, has a bernedoodle named Whitney. Sometimes Whitney gets out of the house. Charlotte is concerned that her dog, as well as other dogs, may get hurt while running in the street.”

DuMoulin explained Charlotte is particularly concerned people who work early in the morning and/or drive at night in the dark might not see a dog crossing the street.

“This could be dangerous and a problem when dogs, as well as her puppy Whitney, are out. She wants to keep her puppy as well as other dogs safe,” DuMoulin said.

In her school project, Charlotte wrote, “I want to have more dog-crossing signs in my community, because we need it to be safe, fun and happy for our families and all of their pets.”

She noted, “New pet owners need to have help from our village so that we can keep their dogs safe.”

Charlotte explained “We got Whitney from a foundation called Make-A-Wish (last September). We got her from Make-A-Wish because … my little brother Wes was born with CDH. … It’s where one of his lungs were not fully developed yet, and he had a very slight chance of living.

Wes, now 8, “worries about the dog getting out of the house,” Charlotte said. “It would be horrible if Whitney got out and got hurt. That’s why we need dog-crossing signs to be put up, so Wes has no worries about Whitney getting out and getting hurt.” 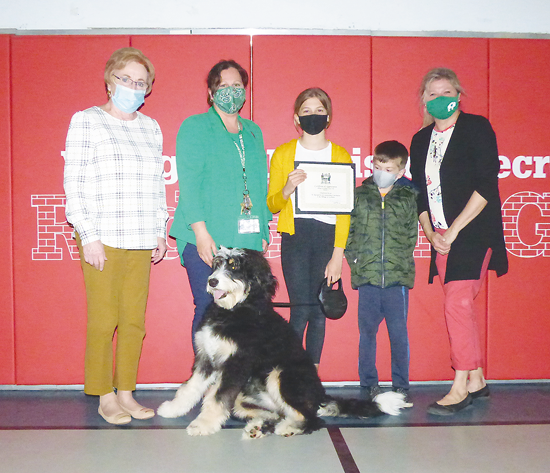 Village of Lewiston Mayor Anne Welch presented a certificate of appreciation to Charlotte Ryan prior to Monday’s work session. The Lew-Port fourth-grade student asked elected leaders to install dog-crossing markers. Charlotte was joined by family, friends, teachers – and, of course, her bernedoodle, Whitney. 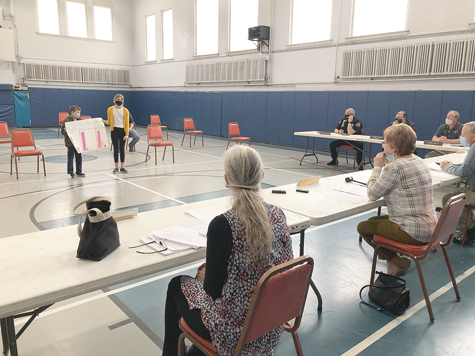 Charlotte presented her research to the board before giving trustees the posters she created. Her work will be on display in the mayor’s office.

“It looks like you put a lot of work into that,” Deputy Mayor Vic Eydt said. “It was greatly appreciated.”

Welch said, “Now that we know, we need to do something to keep your dog safe. We have to thank your brother, Wes, also, for helping out. … It’s good for you looking out for our dogs.”

In presenting the certificate, the mayor said Charlotte showed “outstanding contribution to the Village of Lewiston.” She noted furry friends will now be safer thanks to the passion project.

“It’s a great idea to get kids involved,” she said. “That’s a great project.”

For those wondering, a bernedoodle is a cross between a Bernese mountain dog and a poodle.