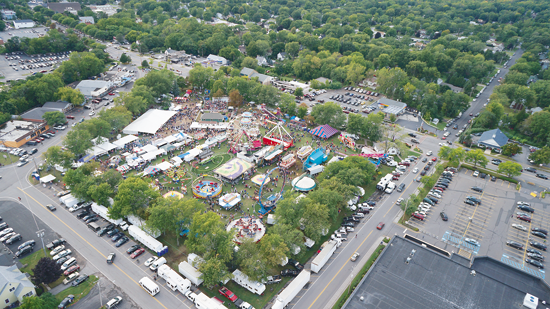 As announcements continue on the state level with regard to COVID-19 reopening plans and protocol changes, there’s some upbeat news on the local level: The annual Niagara County (aka Lewiston Kiwanis) Peach festival is a go for this year.

Officials from the Kiwanis Club of Lewiston – operators of the longtime Lewiston favorite – stressed this week there will be some changes to abide by, with COVID-19 protocols. But, “Were definitely holding the Peach Festival,” announced Jerry Wolfgang, Peach Festival advisory chair.

“There is no question,” he said. “We missed last year because of COVID-19, and our plans are to have the full Peach Festival as we’ve had in the past. The only situation we have is that we need to monitor what the rules and regulations are, that are coming from the governor as far as holding events.

“We’re lucky because we have an event outdoors and, therefore, that gives us the opportunity to be able to space the field. That will be appropriate for a large gathering.”

Festivalgoers will again be able to enjoy the Academy Park midway operated by Amusement Rides of America, dozens of expected vendors, and, of course, the famous peach shortcakes and festival foods.

But again, things will be adjusted as per COVID-19 guidelines, as necessary.

“We’re going to meet (with the ride provider) to make sure (prior) to the festival, to map out the rides so there will be plenty of room between the rides, so as to eliminate any type of crowding, and keep the 6-foot (distance),” Wolfgang said.

Peach Festival Chairman Dean Beltrano said space considerations would determine the placement of both rides and midway games throughout Academy Park. He said the move of the Alphonso DiMino Memorial Bandshell from the Center Street-Portage Road corner to the park’s southwest corner across from Syros would afford Kiwanis room to work with on the field.

“Their rides are set normally with a larger distance than what we actually need, at 6 feet. They’re set apart,” Beltrano said. “The only thing we have to discuss with them is probably less of the midway games, because those are tacked one next to the other.

“With the field layout and the stage being moved – the bandshell – to the back corner, that affords us a little more space on the field that we can stretch out the vendors. And if we have to cut down, we’re not going to lose a lot, because we have more space with the bandshell being in that back corner (near Syros) versus being in the front corner and everything having to go around it.”

Wolfgang said the vendor count is still being reviewed.

“(Along with member) Rick Flores, who chairs the vendors on the field that rents space from us, we’re (still) determining that,” he said. “Right now, from the phone calls and the materials that we’ve had so far, it looks like everybody wants to be back. We can’t determine that until the contracts are signed and sent back in. But we anticipate that that would happen.

“As Dean just told you, we do have more space this year, but we need to adjust to fill our needs, and the rides’ needs, and what the needs are for COVID-19. So, all that planning will take place between now and the actual festival as to how we do the field.”

“We have some great people who help us through that. Sevenson’s, through Gary Rose and Frank Fracassi, both help us with allocating the space for everything,” Wolfgang continued. “We’ve been in the process of developing that now for six months, once we found out that the grandstand was coming down, and the stage was being moved.”

Kiwanis President Lee Allan stressed volunteer support from the community will be critical this year. In times past, the 120-member club has been able to rely on a number of outside sources for additional manpower at the festival. Included were Niagara County Jail inmates who worked on the actual construction of the field, plus community service youth from the courts, local youth organizations and scores of local volunteers who worked the many facets of the festival. Much of that has changed for 2021, due to COVID-19.

“We need volunteers! In the community, if anybody’s (interested) in helping out, go to our Facebook page and message us,” Allan said.  “We’re going to need as many volunteers (from) throughout the community (as we can).” 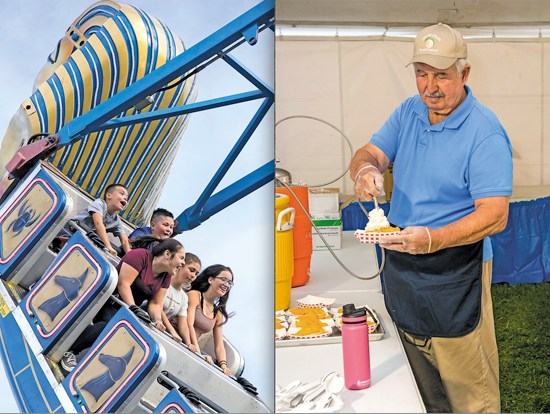 On the midway at the Peach Festival. (File photos by Wayne Peters)

At the Peach Festival

“Let’s talk about peaches,” Wolfgang said. “First, our contract with Bittner-Singer Orchards is definite. We’ve talked with them; we’re set for our supply. We’ll have shortcake. DiCamillo’s will be providing us again with the cakes. So those things are happening; they’re in order. And we’ve ordered all the tents, the apparatus that we need to operate.

Reviewing the festival’s four-night schedule, Beltrano said, “Thursday night, we’ll turn the stage over to the Peach Queen contest, where they’ll be able to get onto whatever our platform is this year, what stage we have set up, and be able to run through their routines and walk the stage and get a feel for it.

“Friday night, we generally bring in a local band to come up on stage. We’re hoping to have Rusty Nickel back this year, as long as the band is still together. We’ll get them up Friday night.

“Saturday night we are going for Elvis. Terry Buchwald has done a fantastic job for us; he puts on a great show. Over the last few years, the show was expanded and he just continues to do great things for us up there on the stage.

“And Sunday night is the Peach Queen contest, so we’ll have them up there.”

Other event favorites are expected back.

“We plan on doing the usual,” Wolfgang said. “The dance companies on Sunday, the cheerleading on Friday night. We still are going to be working with the schools and the youth groups that put on the cheerleading.”

“For us, as far as the parade goes, we can’t control who comes to watch it or how many,” he said. “What our concern would be is how do we have to space out floats? Each unit in the parade, you may have to stand a certain distance apart. For us, that’s what we would be looking at, for what the parade would be.

“I don’t know if the state would mandate barricades along the side of the street, something like that. Our main concern, right now, is if we can have the parade, and how we position our units.”

Beltrano said discussions with the Village of Lewiston are underway.

“Right now, we are in the process of submitting our forms to get permissions for all these things,” he said. “Our plan for everything right now is full steam ahead. We’re planning it as if COVID isn’t even around this year.

“We will adjust, if we need to, based on what the regulations are at the time. But as we see, even just moving from January to now, a lot of the restrictions are coming off. So, we’re hoping by the time that September rolls around – and one of the best things for us, is that our festival happens so late in the year – that there might not be any restrictions at that time; or if there are, that there’s so few that it’s not going to matter to us – that we can hold the full festival, which is our plan and our goal for this year.”

Wolfgang said that, despite the challenges of COVID-19, presenting the Peach Festival – a Lewiston staple since 1958 – has been first and foremost in the eyes of Kiwanians.

“First of all, we’ve been talking about the Peach Festival and planning it, for now this is the second year. We didn’t hold it last year, but we did plan to hold it last year until we found out we couldn’t,” he said. “So we’ve tried to make the clarifications as to what the regulations or rules are going to be. We decided early … we’re going to hold the festival, even if this year we’re just doing the peach shortcakes.

“Second, we then came across with a number of festivals that we’re only renting space to vendors and having it as food festival with no rides. That was our second area that we knew we could run this year. So, in putting all those steps together, we were getting ready to hold something this year.

“In contacting the public, with a club of 120 members, we had pretty good vibes into the community – that the community was telling us we want the Peach Festival. We wanted to hold this.

“But more so, you’re helping our whole community in Western New York. Our one item we like to emphasize is we try to help the children. Kiwanis has been dedicated in helping the children and want to continue that. And of the people who are tired of being locked in to their houses, for the past year-and-a-half, they are now looking forward to getting out. This is a good community effort that they can participate in that (will) help our community.”

For more information on the festival or to volunteer, visit Lewiston Kiwanis Club on Facebook or online at www.lewistonkiwanis.org. 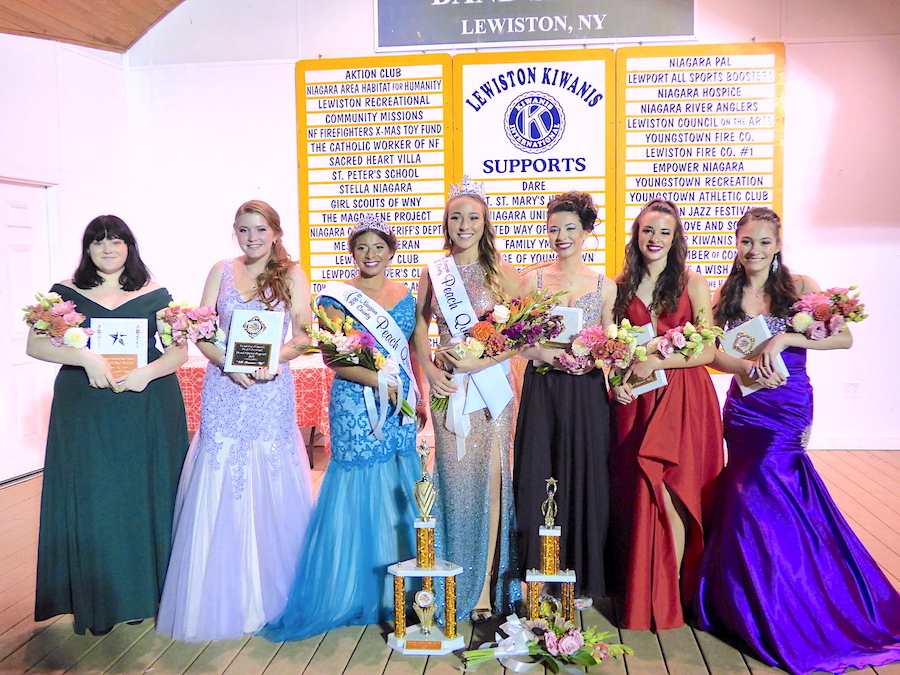