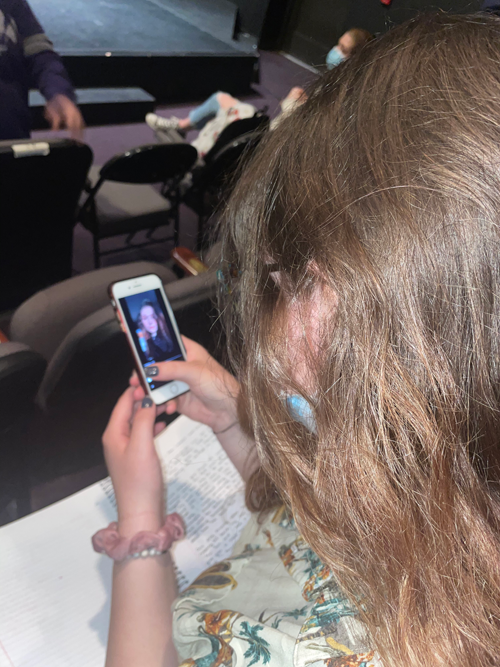 Lost behind the screen

Social media is perhaps the largest trend of the 21st century and has people of all ages addicted to its glossy finish. Since its invention in the late '90s and its growing popularity at the turn of the century, social media has taken the world by storm. It is the most common with millennials and Generation Z because they grew up with it.

"I feel like growing up it was weird if you didn't have an Instagram or Snapchat, and now it's still the same way. When you're out meeting people they never ask for your number anymore, it's always your Snapchat. It's weird if someone doesn't have one," said Julia Fumanti, social media influencer.

Many people are linking social media to American cultural issues such as body image issues, teen depression, and low self-esteem. Throughout the 21st century, social media has even provided a new platform for bullying; cyberbullying has become as big as, or even bigger than bullying itself.

"On social media, people say and do things that they would never do in person. They are able to hide behind their screen and username and do whatever they want. It's almost easy because they can't see the reaction they caused and the damage they've done," said Lucy Canale, social media influencer and advocate.

Each social media platform has its own purpose, which the majority use it for; Snapchat is for talking to your friends, Twitter is for news and jokes, Facebook is for more wholesome content (due to the fact that it is mostly used by Generation X and baby boomers), and Instagram is used to look good, to brag, to appear a certain way.

According to a study, Instagram is probably the biggest online contributor to body dysmorphia; It is an unlimited source to seeing "perfect" images of models, celebrities, influencers, etc. It is detrimental to expose children and teens in the midst of puberty to these so-called perfect beings. Teenage years are extremely difficult for many reasons, but the changing of the body as well as an influx of hormones can make these posts extremely harmful to consistently see. They are presented as the norm, and they most certainly are not (Ramphul, 2018 p. 1).

"Scrolling through an app and seeing edited and airbrushed bodies can definitely lower self-esteem and lead to body dysmorphia … Instagram can provide a toxic mirror through which young women view their bodies in a distorted fashion. Comparing one's appearance with that of a celebrity becomes a problem when girls look at someone with the perfect hourglass figure and believe it is natural, thinking to themselves, 'Why don't I look like this?' " (Campos, 2021 p.1 ).

Not all platforms are not always seen as this toxic, but they also bring out negative qualities; No internet platform is completely unedited. Each has its own level of dishonesty connected to it, even though it often seems completely natural and truthful.

"It's nice to scroll through Facebook and see what my old friends are up to, and maybe a cute meme or video pops up, but a lot of the time it's just parents bragging about their children. It's different when you post about something cool or fun that happened or a family vacation, but constantly hearing you brag about what your child did now can get tiresome," said Cary O'Connor, Generation X social media user.

Not only does social media provide a platform to discuss one's personal life, but it is also very popular for its users to discuss their political views. Comment sections are known to get very heated and cause quite a bit of drama between close friends, family members, and even complete strangers; It is also common to edit your opinions so they come across in a certain way.

"I feel like a lot of times people censor their opinions based on their audience on social media. They want to come across a certain way, so I feel that sometimes what people post or share isn't completely truthful to how they feel," said Abbey Mylock.

It is also common to use social media as a platform for activism; People post stories and captions to share their thoughts on current news, and to spread the word on political topics. It can often start drama as people all have differing opinions. It is difficult to communicate online; What one says can be interpreted in many different ways. This happens over text, email, as well as social media platforms.

"When people talk politics over social media, there is always an underlying bias that some people don't realize resulting in misinterpreted information being spread and exaggerated throughout the world," said Lucy Canale.

It is a well-known saying "Don't believe everything you see on the internet" and while this is true, it is always important to take things with a grain of salt. While social media is a constant reminder of everything you aren't or everything you don't have, it is important to remind yourself that what you see can be interpreted in many ways.

"Sometimes I just want to fall off the face of the Earth. I feel like it would be so nice to disconnect from all of my social media. All of the people that truly care about me, and I care about, can stay in touch over text and call. It's not only a constant reminder of people living all these amazing lives that I am not, but it can also be so distracting. I would have so much time on my hands," said Julia Fumanti.

Since its invention about 20 years ago, social media has become a part of everyday life for many people. They are staying up to date on the lives of their friends and followers and keeping others updated on them.