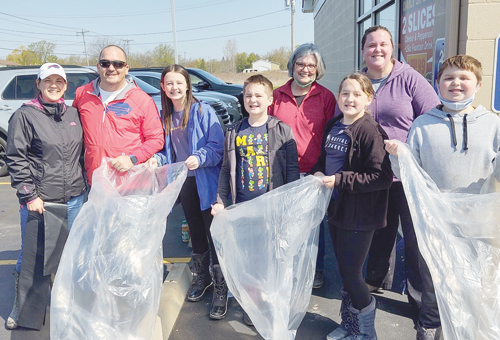 Trash? It's in the bag for Island's 2nd annual cleanup

Eric Fiebelkorn, Grand Island Chamber of Commerce president, never imagined he would be so excited being surrounded by so many bags of trash.

But there he was last Saturday afternoon, outside the Chamber of Commerce office on Grand Island Boulevard, standing in front of a large, Casella Dumpster, which was filled beyond capacity with piles of bags stacked next to it. He was forced to call Giorgio Panepinto, who told him not to worry about a thing. The company that picks up garbage on Grand Island and provided the Dumpster, would make sure everything is cleaned up.

“We never imagined our ‘Clean Up Grand Island 2021’ would be so successful in our second year,” explained Fiebelkorn, who was part of an unofficial organizing committee with Highway Superintendent Dick Crawford; Councilwoman Jennifer Baney; and Debbie Whalen, a citizen environmental steward.

Last year, a small, impromptu event was held, but this year the call went out to chamber members, local civic organizations, youth groups and town residents. The result was more than 200 volunteers cleaning 30 locations throughout the town and covering more than 50 linear miles, Fiebelkorn said.

“They picked up litter and trash along the roads, along with a bunch of other debris, including old car tires, political and real estate signs, cardboard boxes, paint cans, TVs, COVID masks and even a few bowling balls,” he said with a laugh as he drove his truck up Stony Point Road picking up bags for the Dumpster.

Baney was ecstatic after what turned out to be a three-hour effort on a sunny, chilly Saturday morning.

“The cleanup exceeded all of our expectations and, today, the Grand Island community rallied in awesome fashion,” she said. “An unbelievable amount of trash was collected and properly disposed of. The effect of these efforts was immediately visible and will have a great impact on our environment.”

“I’m so proud of everyone who came out to beautify our community and serve their fellow Islanders,” she added. “In the words of environmentalist Chai Jing, ‘The strongest governments on earth cannot clean up pollution by themselves. They must rely on each ordinary person, like you and me, on our choices, and on our will.’ Today, Grand Islanders showed their will to do better.”

“This grew from one woman posting on social media about all the trash she was picking up,” Crawford explained. “Last year, we met and put together a program with a few of us and look what it has grown into today with several hundred people from all ages and from the Rotary, Lions and Kiwanis Clubs and the Chamber of Commerce. The Target store in Niagara Falls jumped in with prizes and bags.”

“You can be assured we will do this every year,” Crawford added.

Whitney was equally impressed. “This is just great,” he said while picking up papers along the boulevard. “A great turnout with so many people pitching in to make the Island clean and beautiful.”

Cleaning both sides of the highway from the Grand Island bridge to the Beaver Island State Park entrance is a community service project the Rotary Club of Grand Island has done each spring and fall for years. This year, it covered that area as part of Clean Up Grand Island, but it also was helping the Niagara River Greenway’s effort to clean the waterfront from Buffalo to Youngstown.

“It was wonderful for our Rotary Club of Grand Island to join so many community groups honoring Earth Day this year in cleaning up the Island,” said Rotary President Sherry Miller. “Carrying the Rotary District 7090 theme of Great Lakes Watershed Cleanup, the club included the newly christened Shoreline Trail, which connects the 190 South Grand Island bridge bike path with the Beaver Island Park and runs parallel to the Beaver Island Parkway. All together, some 50 acres were cleaned and we collected more than 500 pounds of trash.”

“It was exciting to see over 40 people working together with our Rotary members joined by Grand Island High School Interact members, University at Buffalo Rotaracters and local community volunteers. We look forward to working with the Chamber of Commerce on this event next year,” she added.

“It is great for the youth on Grand Island to get together and give back to our town,” Lucas said. “It’s a great opportunity to pick up trash and make Grand Island a nicer place.”

His brother added, “I really want to become more involved in our community, and today is a step forward by volunteering and helping out our community.”

Mia Phillips, a GIHS senior and an Interact Club member, added: “To clean up the highway makes me feel better because we are helping to clean up our environment, which is so dirty in many places.”

“We look forward to seeing everyone again next year for an even bigger and better event,” Baney predicted. “The sheer volume of participants and quantity of litter collected was amazing.”

The Rotary Club of Grand Island and its many high school and college volunteers clean the highway between the Grand Island Bridge and Beaver Island State Park (Photo by Michael J. Billoni)