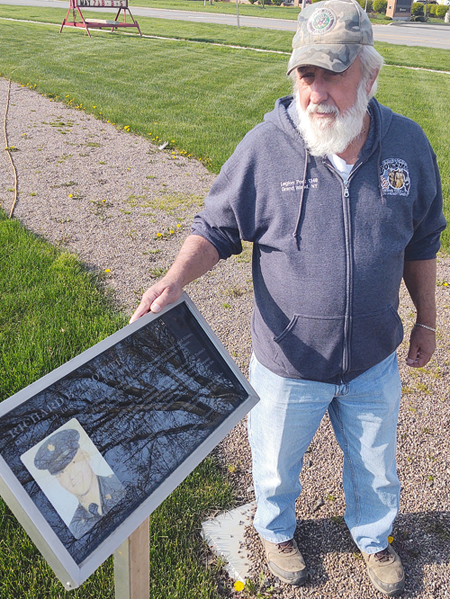 Ray Sommer Jr. reflects on his time in Vietnam as he admires the dedication to his friend Staff Sgt. Richard B. Trotter.

Rich Trotter, Emerson Gloss and Ray Sommer Jr. all received their draft notices during the Vietnam War on the same day, Oct. 26, 1966, four months after they made history as members of the first graduating class from Grand Island High School. Before they all departed for basic training, a party was held at the Island Lanes, and they all received good wishes from everyone.

While the three young men were concerned as they left Grand Island to serve this country as members of the U.S. Army, they all vowed they would get together upon their return to the Island.

Unfortunately, Trotter did not return, as he lost his life less than one week before he would be heading home. Sommer, who will represent Trotter at the unveiling of the Charles N. DeGlopper statue on Saturday, June 5, received a letter from a friend on Grand Island detailing the death of his friend.

Staff Sgt. Trotter served with Company D, 6th Battalion, 3rd Infantry Regiment, 9th Infantry Division. His company was tasked with participating in a series of air-mobile assaults on suspected enemy positions. Sommer said the company’s officer who was charged with leading the troop was sick and unable to participate. Trotter volunteered to lead the troop and, shortly thereafter, his company took heavy fire and he was hit by enemy machine gunfire. He died from his wounds before medics could reach him.

For his service and the many heroic actions during his service, he was awarded the Bronze Star, Purple Heart and the Silver Star, as well as many other medals.

Sommer served three years in the service by working in Virginia upon his return from Vietnam with the Army Map Service. He said Trotter served only two years and agreed to extend his tour in Vietnam so he could get an early release.

“He was essentially what we called a short-timer on his extended tour, as he could see his discharge coming very soon,” Sommer said. “When you are in that position, you are usually taken out of harm’s way and they would send you back to the rear base. You let down your guard, because you are so excited to get home. That is why it was hard to believe he would volunteer to lead his troop, but that says something about the soldier he was.”

Sommer said he “feared for his life every day he was in Vietnam. You had to. … Or else you would be dead.”

Sommer said he is pleased Grand Island is recognizing its veterans “because most people have no idea the sacrifices they made for our country.”