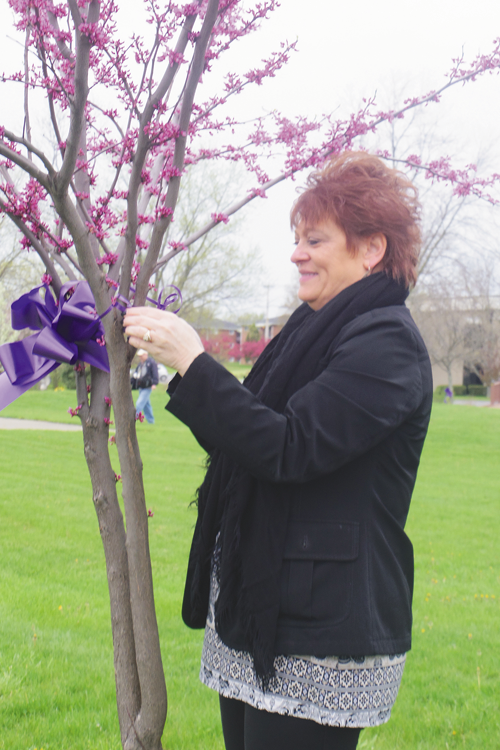 A woman ties a purple ribbon around a tree at a past Grand Island Relay For Life "Paint the Town Purple Day." (Submitted photo)

Relay For Life to hold an in-person event

Relay For Life will be held in person this year – the first time since 2019. This year’s event has been scheduled for 3-7 p.m. Saturday, July 17, at the Fuccillo Hyundai dealership, 1910 Alvin Road.

Just a few months ago, an in-person event was considered to be unlikely. In February, Lynn Marston Dingey, one of three co-chairs of Relay For Life, explained, “We are hoping for an in-person event, but it is doubtful that can happen because of New York state protocols, American Cancer Society protocols, and people’s comfort levels.”

Since then, guidelines have changed, along with the date of the event, which went from a tentative date of June 4 to a firm date of July 17, due to new American Cancer Society guidelines.

“Starting in July, we can do smaller, scaled-back versions of Relay, as long as we have a drive-thru option available. Our event has now gone to a hybrid event, which is both in-person and drive-thru,” Dingey said.

In addition, “Paint the Town Purple Day” has been set for May 1. The committee is hoping to sell ribbons at the Town Hall parking lot. “We’re going to have pop-up sales for bows, possibly at Mallwitz’s Island Lanes. Maybe at Adrian’s, if we can, for a night or something. Just to have a place to pick up a bow,” Dingey said.

Several bow sizes will be offered this year: a small pole bow for $1, a bigger pole bow for $2, and a bow big enough to tie on a tree for $5. Dingey encouraged people to hang up the purple bows in “any way they want. However that bow gets there, that’s up to them, but we’d love to have the Island painted purple. We usually hang a couple at Veterans Park. We did a couple at the entrance driveway to the park and a couple where we usually have Relay.”

“We’d love to see bows everywhere. Get the Island painted purple,” Dingey said. “The objective of ‘Paint the Town Purple’ is to bring attention to Relay and to show survivors that they have the support of the community.”

The community support has to take a different form this year, due to COVID-19 restrictions.

“To keep everyone safe, instead of doing Relay at Veterans Park this year, we are moving to the Fuccillo Hyundai dealership in the back. There’s a big open lot back there. We are going to go there so we can have places for people to park, with a drive-thru lane around the outside. The survivors’ dinner is going to be BW Barbecue. So, it’s going to be chicken or ribs or a chicken-ribs combo, and there will be the option that, if anyone wants to pick up a chicken dinner, they can,” Dingey said.

Tickets will be sold via presale or at the event. The details of the ticket sales are still being worked out, Dingey explained. People will also be able to purchase dinners on the day of the event without a ticket.

“Survivors are still getting their complimentary dinner. There will be dessert there for them, also. We’ll have places for people to sit if they want to eat there or they can take the meals with them,” Dingey said.

Activities at the Relay For Life event will include a small car show.

“Our theme for this year will be ‘Cruising for a Cure.’ It’s a car theme. It was originally scheduled to be our theme last year, but it had to be put on hold. It didn’t happen, so we thought that, this year, it will be perfect,” Dingey said.

There will also be activities for kids at a separate table. The table will be sanitized between uses. The luminaria, also, will be handled differently this year.

“Because we will not be there when it gets dark for luminarias, we’re going to do a luminaria event similar to what we did last year,” Dingey said. “People can pick up luminaria, decorate them, and put them on their front porch. People also have the option at Relay to decorate a luminaria, and we can display it on the 18th at Veterans Park. We will have some pop-up places where you can buy luminaria. I think that we got some new people interested in it last year that didn’t really know about luminarias before. It will be later at night, so it will be dark.”

Details yet to be worked out concern music and whether or not to name an honorary survivor.

“If we have a DJ, I was thinking about bringing past survivors up and having them talk about how 2020 affected them and how COVID affected them as survivors,” Dingey said.

Things that will not happen, due to COVID-19 restrictions, include walking in groups around a track, which means no survivors’ lap and no caregivers’ lap. Dingey noted many survivors – especially people who are currently undergoing cancer treatments – might be reluctant to attend an in-person event.

“We understand that some people aren’t comfortable being in-person,” Dingey said. “People who are going through cancer treatments might not want to be there. So we have the drive-thru option. They will be able to pick up a kid zone box. Survivors will be able to drive up and get whatever they would get in that tent.”

People are invited to form teams and to set up a table at Relay.

“We do not have very many teams signed up this year. We’d love to have more,” Dingey said.  “New teams are welcome, but they need to follow cleaning protocols. If people want to sign up and bring family, we’re all about getting together.”

Upcoming fundraisers include the “Purple Ribbon 5K,” scheduled for May 23 at Beaver Island State Park. Cost is $30. Everyone gets a medal, a T-shirt and a swag bag.

The golf tournament is scheduled for June 21. The cost is $130 per golfer, and it includes lunch and dinner at River Oaks. “It’s a full day and it’s a lot of fun,” Dingey said.

Regular fundraisers that have not been scheduled yet, because of crowd control issues and COVID-19, restrictions include the lawnmower races, the “Bands and Baskets” (normally held at Mallwitz’s Island Lanes), and the hockey game.

“That (the hockey game) might happen later on in the fall,” Dingey said.

“We need you! We need people to show up and support Relay! Cancer survivors need our support,” she added.