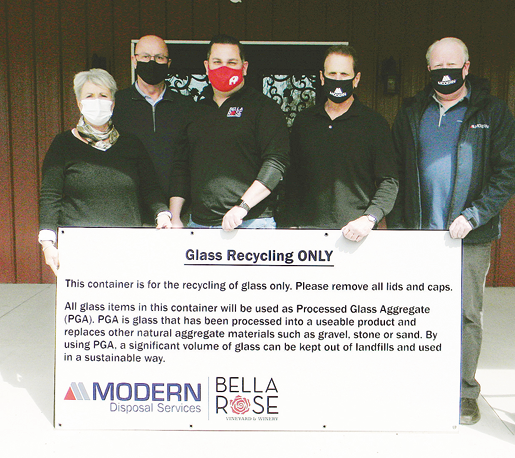 Call it a groundbreaker for the area’s wine industry.

Recently, Bella Rose Vineyard and Winery in Lewiston unveiled a new Earth Day-themed recycling partnership with Modern Disposal that will allow for a proper disposal/productive future for consumed wine bottles.

No, it’s a not for a new collection of wine bottle art décor or something similar, although that likewise sounds interesting. This program involves the actual recycling of discarded wine bottles for something productive, such as use in highway building materials.

“It’s just a very sustainable way of doing something with the bottles that don’t fall within NYS (bottle) recycling programs,” said Mike Schweitzer of Bella Rose. “And obviously there’s a huge need in the industry for it. It’s something that’s done in California up and down the entire state. And New York is lagging behind.”

Schweitzer, along with Modern officials and 1st District Niagara County Legislator Irene Myers, announced this week that Bella Rose is the new site of a permanent drop-off for glass bottle recyclables – wine bottles and the like. While the state has offered bottle/can deposit/recycling programs for some time, such is not the case for other containers – namely wine bottles.

Schweitzer pointed to some impressive EPA data he came across when it comes to the actual disposal practice of wine bottles, which he called disturbing. Did you know, for example, that, of the estimated 300 million cases of wine sold in the U.S. and consumed by the public, roughly 210 million wine cases end up in landfills?

He said roughly 60% of a wine’s carbon footprint is in the production of the wine bottle and that, according to EPA estimates, 70% of all wine bottles are not even recycled. Further, glass once locked up in a landfill never breaks down and will remain in its current state upward of 5,000 years into the future.

Talk about a throwaway culture.

According to Schweitzer, a mere 28% of all the glass the American public buys actually gets recycled.

“It is a shame, because glass can be recycled forever; and turning old product into new represents a big win for the environment,” he said.

So what’s this new glass recycling program all about?

Modern recently placed a special collection Dumpster down the driveway at Bella Rose, located at 1243 Ridge Road, in Lewiston, just west of Town Hall. Open to the public, it now provides for the safe, environmentally friendly disposal of wine bottles and similar glass containers that would otherwise go to a landfill.

“All glass bottles in this Dumpster will be used as plastic glass aggregate. PGA is a safe and credible alternative to other natural aggregate materials such as gravel, stone or sand,” Schweitzer said. “By using PGA, a significant volume of waste can be kept out of landfills and used in a sustainable way” such as large municipal projects – water installations, highway work and the like.

“What we want to do with the glass is make processed glass aggregate,” said Al Davis, vice president, post collections operations and sales at Modern. “It’s a substitute for sand and gravel material, and it’s something that a little contamination won’t bother it.”

“There’s other recycling options for glass,” he continued. “Like one piece of ceramic, it can be a contaminant for that. … So we’re going to process the material (glass) and we’re going to use it to replace things for sand and gravel (use) … for things like pipe beddings, or drainage (uses) things like that.

“We’re also going to work in conjunction with the Town of Lewiston and some of their highway projects and use some of that also. We got plenty of demand for using the material.”

Davis said the program continues to grow in interest in other parts of the country.

“It’s done in New England and others where they crush the material,” he said. “Some highway departments even have their own crushers to do it. You can blend it with virgin sand and gravel also if you need to.

“We’ll be able to process it with our equipment that we have at Modern and be able to use that material. Hopefully, the word will get out to other wineries (on this) and we can get plenty of the material coming in there.”

At this point, Bella Rose is taking the lead in serving as a regional bottle drop-off site; others are also being considered, Davis said.

“I think what we talked about was to start here (at Bella Rose) and see how it goes – see if there’s a demand for it – and we’ll pilot for it,” he said. “East of here, there’s more wineries.”

Myers called it a stop in the right direction.

“(Mike sent me an email) on what is going to be happening here, with the recycling program he was going to working on with Al from Modern. He had statistics (on recycling). … I was just floored,” she said. “I didn’t realize that 70% of wine bottles are recyclable (yet they are not being recycled). I was shocked.”

Noting the EPA figures mentioned earlier, she added, “And with Earth Day, what a great way to open this up to the public. My eyes were certainly opened up by this. I mean it’s amazing. Like, we’re at home drinking a glass of wine; everything goes into the recycle bin. And not knowing or realizing that 70% doesn’t. So it’s great that our basic garbage will be recycled with the help of Modern to use in a productive, environmentally safe way. So why not? I think it’s great on Michael’s and Alan’s part to start this and open it up to the public.”

Davis said Modern recently expanded into this area and is excited about its potential.

“We were doing it already with some of our clients who had rejected glass,” he said. “It was actually a glass recycler who gets glass from places and has to reject loads. Mostly because of ceramics. And we were taking some of their products and already doing something like this. We were already ready to do it. It’s something that I’m familiar with from my past. It’s something we’re excited about.”

“I have put it out to the Niagara Wine Trail, and they’re really, really excited about it,” he said. “Again, it’s all about sustainability. So, you don’t want to spend more gas getting the bottles here than would take to get to the facility. Proximity is certainly an important part of this.

“Having it so close to Modern is a great asset, because they can use a smaller vehicle, a low-emissions vehicle to get bottles down here. Utilize the program for the wineries that are closer and, again, if it takes off, hopefully, it can spread throughout where it makes sense … keeping it as environmentally friendly as you can.”

Schweitzer said he could envision this new recycling venture expand to liquor stores, too, as there are currently no deposits on wine bottles.

“The problem is that liquor stores don’t actually go through the volume … so you have a centralized location in the community (such as Bella Rose) that, once these spent bottles have a place they can go to, it’s a lot better,” he said. “That’s why you have bottle and can returns at supermarkets, because they’re purchased (there).

“You only really need one or two locations in the community. So, if these (recycling drop-off sites) pop up in wineries or in other breweries, because of growlers, etc., those would be huge assets for the community and their environment down the road.”

“Maybe some local bars and restaurants in the area (also); that’s where their(wine bottles) are generated,” Davis said.

As to including other entities, such as brewers, he said Modern was yet to arrive at that point.

“No, not yet. It’s a pilot program. (We’ll) see how it goes from here,” Schweitzer said.

Modern CEO Michael McInerney joined with Vice President of Operations Robert Trunzo in calling the venture a win-win for all involved.

“I think it’s a good thought for the environment,” he said. “You have the brown and green glass; (there’s not really a use for that). It’s a good way to put it back into the community, for a reusable product. For us, it becomes a positive thing; a win-win.”

Trunzo said, “It supports our mission – to create a more sustainable environment – paired with, as Mike brought, up our low-emission vehicles. We’re the largest compressed natural gas fleet in WNY. Obviously, reducing our emissions, our carbon footprint, and that’s the type of vehicles we’ll use to service this. So, I’m excited about this, the future.”

Schweitzer said, “The numbers really speak for themselves, for the need in the industry. Alone, my winery goes though thousands and thousands of bottles, so this makes sense. And the scale of that … right now there’s 28 of us now just on the Niagara Wine Trail. So, when you start multiplying the numbers, it’s easy to see.”

Myers said, “I really think it’s a great, joint endeavor, with Bella Rose Winery and Modern Disposal, of initiating this ‘go green’ (venture). When I looked at the numbers (70%), I couldn’t believe it. It’s a lot of waste.

She added, “It’s a win-win; a good, good, for Mike, Modern and our environment.”

Now open, the new wine bottle drop-off Dumpster is found at the base of the Bella Rose driveway. Just stop by with your wine empties.

For more information on Bella Rose operations and this new project, visit www.bellarosewinery.com or call 716-405-7355.