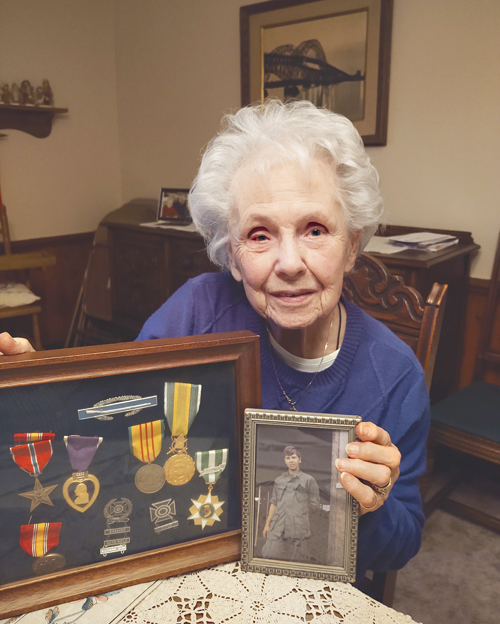 Shirley Luther with her son's medals and photo she cherishes. (Photo by Michael J. Billoni)

96 years young, Shirley Luther recalls a Mother's Day she would rather forget

When Shirley Luther and her husband, LaVerne “Bunny,” the Town of Grand Island supervisor at the time, and their three girls attended services at Trinity United Methodist Church on Mother’s Day 1970, they offered prayers for their 21-year-old son and brother, US. Army Pfc. Robert B. Luther, who had been sent to Vietnam five months earlier.

After arriving back to their apartment in the family’s big, white farmhouse at the corner of Baseline and Bedell roads and preparing lunch to honor mom, Bob’s fiancé, Ruth Lindelow, arrived with one yellow rose from Bob for his mother. According to Sue Berger, owner of The Flower A Day Shop on Grand Island Boulevard, a yellow rose signifies admiration, delight and remembrance. Shirley put the rose in a vase and placed it on the television set in the living room. The front window was open, because it was a beautiful day.

Suddenly, a gust of wind outdoors knocked the vase and rose to the floor.

“I looked at Ruth and said something like, ‘I certainly hope that doesn’t signify bad luck,’ ” Shirley said during a recent interview over dinner in her home.

The matriarch of Grand Island, who is 96 years young and whose husband, grandfather (Henry W. Long) and great-grandfather (Joaquim Long) were all town supervisors, served as the secretary to the superintendent of Grand Island Schools for 28 years until she retired in 1985. Her husband served five two-year terms as supervisor and one four-year term on the Town Board.

On the Monday after Mother’s Day in 1970, she was seated in her office when someone came in and said: “Mrs. Luther, there is a major from the U.S. Army walking up the sidewalk with your husband.”

“I immediately got up and walked into Mrs. (Veronica) Connor’s office and they told me to sit down,” she related in a hushed voice with her eyes watering. “They told us what had happened to Bob. That was an awful day. Bunny took it very hard because that was his only son. All I did was cry.”

The major told the family their son could be buried at Arlington National Cemetery in Arlington, Virginia, but they wanted his remains returned to Grand Island for a service at Trinity on May 23, 1970, and burial at the family plot in the church cemetery on Whitehaven Road. The wake service at Kaiser’s Funeral Home was three days to accommodate so many people.

“That was an awful experience,” she said.

Luther was killed at Khe Go Bridge in Vietnam. His unit, First Battalion, 5th Mechanized Infantry Division, broke out from a 43-day siege at Base Fuller – a mountaintop camp they called “Hell,” exhausted and weary and fleeing with the enemy in pursuit. As the Americans made their way down a mountain on a 5-mile dash in 90-degree heat, the North Vietnamese enemy continued firing mortars at them. About 100 yards from the trucks waiting to take them to the rear, a helicopter riddled with bullets from enemy ground fire crashed among them, killing all six Americans on board.

Luther was the lone soldier on the ground killed.

“He was a loving son with great potential who was an extremely patriotic young man who is very much missed,” his mom said as she paged through a scrapbook of memories.

She has the letters he wrote, including one while he was in Vietnam.

“I know why we are here, but I wish it were for a different reason,” he wrote. “It bothers me to see so much death and destruction.”

Luther was engaged to be married, but was drafted into the Army in June 1969. The draft board allowed him to stay home for his sister’s wedding, but he had to depart the following day for Fort Dix, New Jersey, where he became a member of D Company, 1st Battalion, 11th Infantry Regiment of the 5th Infantry Division. He was sent to Fort Lewis in Washington and was supposed to go to Germany, but orders were changed and, in December 1969, he was sent to Vietnam.

Back then, there were many who objected to the war and some were draft dodgers. The thought never crossed his mind, as he came from a family with a rich military history.

The Henry W. Long and John Schutt Jr. sides of his family came to the Island in the late 1800s. His grandfather, Benjamin Kreger, served in the Army during World War I and his father was in the U.S. Navy during World War II. Even today, two of Shirley’s great-grandchildren, Jagger Click (21, U.S. Air Force), and his brother William (18, U.S. Navy) are serving their country.

Bunny and Shirley were longtime family friends of the DeGloppers, and Grand Island war hero Pfc. Charles N. DeGlopper had his locker in Tonawanda High School next to Bunny’s.

“I met Bunny when we attended Tonawanda High School and I knew the DeGlopper family from over here on the Island. They had a very big farm,” Shirley said. “Bunny’s family did not have a lot of money back then, so Charles’s mother used to pack two sandwiches in his lunch bag and one was for Bunny.

“At the time, I was 14 years old and I remember Charles as a tall boy, but one who was shy,” she recalled. “I do believe he would be taken aback by all they are doing for him at the memorial. On the other hand, I think it is a wonderful tribute to him and to all of our veterans, especially those killed in action.”

During World War II, Shirley said her and her girlfriends got caught up in the Americana spirit in the country and they created a monthly 8-by-14-inch newsletter of Island news, birthdates, poems and other treasurers, which was typed on colored paper and mailed to nearly 150 Islanders fighting for this country in World War II.

Titled “The Islander,” Shirley was the editor, Catherine Killian was the typist and Edna Schutt, Dorothy Phillips and Gertrude Cannon were the writers. The headline on its first anniversary, Jan. 11, 1944, was “We Did It.” The story began, “We’ve actually kept going one whole year, although when we began, we had hoped the war would be over by now.”

Bunny, who passed away in 1999, and Shirley, filled the years since their son’s death with a strong faith and commitment to their church, total community involvement and family gatherings. Their daughters, Nancy Sandford, Carol Dunworth and Gail Click, spouses, six grandchildren and eight great-grandchildren all live on the island.

Luther attended Sidway and Huth Road schools and was in the first class when Grand Island High School opened in 1963. He was a Boy Scout, earning several badges, and enjoyed building model ships and airplanes. He enjoyed fishing with his older sisters and, like most young men, he loved playing sports, including football, baseball and wrestling. He also played trumpet in the high school band and was active in Youth Fellowship at Trinity United Methodist Church.

Upon graduating from Grand Island High School, Luther attended Erie Community Technical Institute and graduated as a mechanical engineer and began working at an architectural firm in Buffalo and for the town’s engineering department.