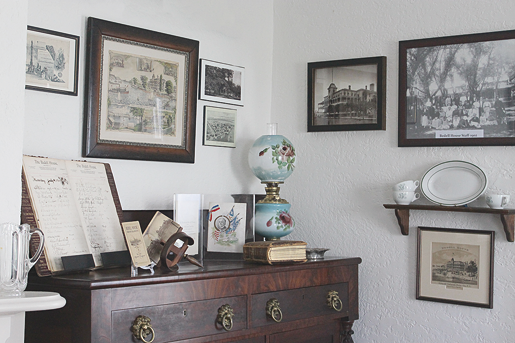 Lovely images - photos and renderings - of the Bedell House grace the walls of River Lea. (Photo by Karen Carr Keefe)

A fresh coat of paint and a reinventing of a room in tribute to a revered Island family has done wonders for River Lea, the home, headquarters and museum of the Grand Island Historical Society.

In January, Shamrock Painting brightened the walls and trim of the dining room, the parlor, the stairwell and the upstairs hallways, getting River Lea ready for a new chapter in its history.

Beaver Island State Park’s beautiful mansion was once owned by Lewis F. Allen, uncle of Grover Cleveland of Buffalo, who served as U.S. president in the late 1880s.

Now that mansion also captures the history of Grand Island’s Bedell family and its patriarch, Ossian Bedell, with a collection unparalleled in Western New York.

Historical Society President Curt Nestark said that, when the rooms had to be cleared for painting, society members Sharon Nichols and Carolyn Doebert decided to turn the dining room into a tribute and depiction of the history of the Bedells.

Nestark said collection pieces that were in storage came out and many hours of work went into establishing the Bedell Room. But Lewis F. Allen’s picture was left in a prominent place in the room because he had River Lea built for his son.

Among the treasures are photos of the famed Bedell House, a welcoming hotel and popular gathering spot in its heyday. It was opened in 1877 by Ossian Bedell, who had it built on land purchased from Allenton Farm. Bedell was a longtime Islander who owned the Buffalo and Grand Island Ferry and became Grand Island supervisor.

Lovely images – photos and renderings – of the Bedell House grace the walls of River Lea. The hotel springs to life in other artifacts, such as the 1901-02 hotel register, the same years as the Pan-American Exposition in Buffalo, during which time President William McKinley was assassinated. Nestark pointed out the name of Alma Hoff, sister of the last private owner of River Lea, is in the register. Signatures in the book are fancy and artistic.

There’s an original and an enlarged group photo of the Bedell House staff from 1901-02.

“In that photograph, you can see much clearer – and we made it bigger – what people did by what they’re wearing,” Nestark said. In the photo, one can see a ferry captain, either Capt. Pettit or Capt. Fix. At that time, the ferry company had been sold to the Fix brothers, Nestark said.

Another iconic image of the 1877 Bedell House, a 5-foot-by-4-foot lithograph from the 1960s, is currently on display at the Grand Island Memorial Library. The lithograph had been displayed behind the bar at Bedell Candlelight Lounge in Tonawanda.

The first Bedell House was destroyed by fire 10 years after it opened. The rebuilt Bedell House burned again in 1935 and, for a final time, the Bedell Annex was consumed by fire in 1988. But it was another kind of hot spot in between the fires – where people gathered for boat races, dances, bridal showers and live concerts. The summer restaurant Casey’s Cabana at the end of Ferry Road is on the site near where the Bedell House stood.

Other significant artifacts tell the story of Ossian Bedell’s storied life as a mover and shaker in Buffalo and Grand Island. Bedell was invited to lunch by President McKinley, and the actual invitation and the menu for lunch are displayed in the Bedell Room.

A section of the room will be devoted to an expanded display of Grand Island’s grand and ornate clubs, such as the Falconwood and the Oakfield Club. 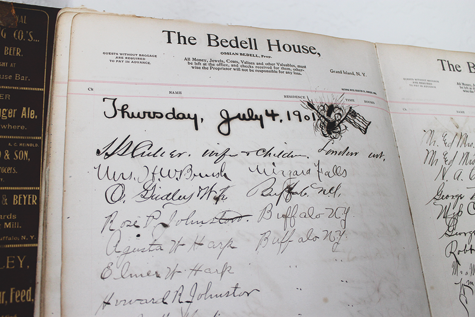 A 1901-02 hotel register from the Bedell House bears the fancy signatures of guests, including Alma Hoff, the sister of the last private owner of River Lea. (Photo by Karen Carr Keefe) 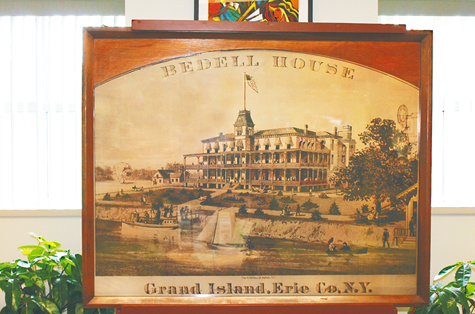 An iconic image of the 1877 Bedell House, a 5-foot-by-4-foot lithograph made in the 1960s, is currently on display at the Grand Island Memorial Library. (Photo by Karen Carr Keefe)

There’s also an interesting collection being put together of items found from Electric Beach, a waterfront resort and dock area along East River and Harvey roads. The area was destroyed by fire in 1918.

The story of how Nestark came by much of the Bedell collection is a little miracle in itself.

“The majority of the stuff in here came from the Bedell family of Tonawanda,” he said of the Bedell Room.

In 2009, Nestark had reached out, through his neighbor, Joel Bedell, to Jack Bedell, who used to own Bedell Candlelight Lounge and Restaurant in the City of Tonawanda. Bedell took him to a garage where the collection of Bedell memorabilia was in boxes. Bedell gave Nestark the boxed historical items for the Historical Society at River Lea. Some of the special treasures included Ossian Bedell’s diplomatic passports. He was a representative between Great Britain and the U.S. A document signed by Queen Victoria and others by presidents McKinley and Benjamin Harrison. All the diplomatic passports have been authenticated.

A year after Jack Bedell donated the boxes of artifacts to the society, the garage where they had been stored was burned in an arson.

“So if I hadn’t contacted my neighbor next door and Jack hadn’t said, ‘Yes, take all this stuff,’ all of that – including the glass lithograph of the Bedell House – would have been destroyed in the fire,” Nestark said. “It would have been gone forever.”

River Lea had only three private owners, Lewis Allen, who built it; James Tillinghast; and Zora Hussey, from 1908 until the 1950s. At one point, the state was going to tear down the mansion, but the site was saved because of the historical connection to Lewis F. Allen and Grover Cleveland.

“They are really good landlords because, whenever you need anything, they are right there to help us,” Nestark said.

The state pays for the mansion’s gas and electric and it recently invested thousands of dollars in a new boiler for River Lea. State Parks senior management recently told Nestark it will put in new exterior lighting to shine on the house, the parking lot, walkway and garage. Patrons will be able to see the house from across the river.

The River Lea museum also contains a display of artwork by Amos W. Sangster, a friend of Grover Cleveland, who did drawings of Lake Erie and Lake Ontario and everything in between –the falls and the islands.

“He only did two Grand Island ones, which we own both of, in our collection,” Nestark said.

The River Lea renovations, which have cost about $8,000 so far, were made possible through membership dues, patrons, and Historical Society fundraisers – such as luncheons, a Victorian tea, and garage sale.

Nestark said Western Region senior State Parks officials visited recently and were very impressed with the renovations and how nice River Lea looks: “They’re very excited about what we have done in here. The mansion was closed to the public by the state last winter due to the pandemic. It’s too bad we just can’t open up yet.”