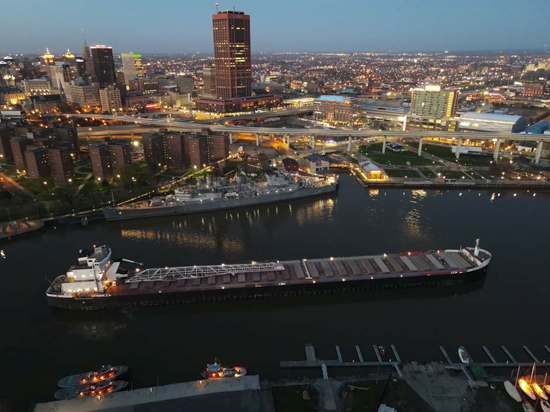 An evening shot of the 800-foot American Mariner lake freighter in the Buffalo River, with the Naval Park and the Skyway in the background. (Photo by Marcus Gillebarrd, as posted on the Facebook group page Buffalo Area Transportation, Industry, Architecture and Defense)

“What to do with the Buffalo Skyway?”

As the New York State Department of Transportation continues its extensive review on the future of this heavily used waterfront span with a push for demolition, the debate in Buffalo-Niagara continues.

The span first opened in the early 1950s to serve the transit needs of a then-growing metro region plus numerous waterfront interests, including a large steel industry, related coke manufacturing, forge plants, flour-milling operations and ship-building/maritime facilities. Today, the Skyway remains in service as a primary transportation link from downtown Buffalo to the south towns. It serves approximately 46,000 vehicles daily, including an estimated 5,000 to 7,000 trucks and commercial vehicles.

Despite its heavy use, a push continues to take down the span in order to allow for new and continued development on the waterfront and outer harbor areas. U.S. Rep Brian Higgins, whose 26th Congressional District includes the Skyway, has been a leading voice in calling for its demolition.

“A decade of expressway building in the nation in the 1950s, including Buffalo, fed that era’s obsession with automobiles,” Higgins said in recent congressional testimony in support of Buffalo projects as the Biden-Harris administration considers a massive federal infrastructure bill. “It hurt city neighborhoods and destroyed a lot of quality of life.”

Included in his remarks were calls on the federal level to address the major arterials in Buffalo – namely the Kensington (Route 33) and Scajaquada (Route 198) expressways. Higgins also included his call for removal of the Skyway in correspondence to U.S. Department of Transportation Secretary Peter Buttigieg on this issue. He argued the span has become obsolete, has critical infrastructure and safety issues, and is impeding development of the Buffalo waterfront.

“In the Biden-Harris administration we will make righting these wrongs an imperative,” Higgins wrote. He went on to call Buffalo and Western New York, “a case study of this damaging period in urban history.”

Higgins’ backing has won the support of Gov. Andrew Cuomo, who has directed the New York State Department of Transportation to undertake an exhaustive scoping study to determine the Skyway’s future. Since early 2020, DOT has been considering a plan to remove approximately 3.5 miles of interchanges, highway approaches and infrastructure on the span extending from Church Street in downtown Buffalo to Tifft Street in the Outer Harbor area. It would call for complete removal of the 1.4-mile Skyway complex. In turn, a new highway connector starting at New York State Thruway I-190 Exit 3 (Seneca Street) and continuing though South Buffalo neighborhoods to the Tifft Street interchange at Route 5 would replace it.

Estimated cost for removal of the Skyway complex itself is said to be in the range of $600 million to $1.4 billion, according to the DOT. Costs for the connector are still in development, and funding for either project has yet to secured.

She said DOT is looking at the future and alternatives.

Calls for removal come off a massive, nearly $30 million Skyway redecking project completed recently by DOT that is projected to extend the span’s service life at least two decades.

It has also led to many residents in Buffalo Niagara questioning the reasoning of both Higgins and Cuomo for removal of the span at this time. The topic has become prominent on social media pages, notably on Facebook where two groups – the Skyway Club and also the Buffalo Area Transportation, Industry, Architecture and Defense – have come out in opposition to any plans for removal.

Rachel Schneekloth, a Buffalo public school teacher who serves as administrator of the Skyway Club on Facebook, said her group organized soon after what she discovered was a growing commonality of love for the bridge and opposition for its removal.

“This past winter, I was chatting with my friend … about the city and the Skyway,” she said. “We discovered that we both love the Skyway and he told me about the plan to tear it down. … I decided to start Skyway Club on Facebook to find out how many other people feel the way I feel – affection and admiration for the Skyway bridge.”

What she soon discovered is there’s a large segment of Buffalo-area online followers who do not want the Skyway removed at all.

Launched just recently, “The club has grown through word-of-mouth and we are up top over 850 members,” Schneekloth said. “We also started a petition, asking for a public conversation about priorities and plans before demolishing the Skyway. We are up to 2,200 signatures to save the Skyway with more added every day. There is lot of love and positivity for the Skyway out there!”

Commenting on the span’s value to commuters, she continued, “The Skyway is a part of the region’s traffic infrastructure that goes north and south along Lake Erie and the Niagara River. What’s important about the Skyway is that, like the Grand Island bridges, it allows both car/truck traffic and boat traffic at the same time without delay. There is still important shipping in our region as well as a significant recreational boating economy. Because of the Skyway, those boats and ships don’t have to wait for lift bridges, and vehicular traffic can continue unimpeded.

“In addition, the truck traffic along the north/south corridor is critical for maintaining the manufacturing base of our community, such as (the former) Bethlehem Steel site and in Niagara Falls. A lot of truck drivers have joined Skyway Club!”

She said there continues to be building opposition via Facebook, in calls and emails and on local talk shows.

“The vast majority of informed opinion (that I encountered) is that we need the Skyway as a part of our transportation infrastructure, and as our unique signature bridge.”

In response to area opposition, the state held a contest to gauge alternatives on a future use versus demolition. A preference was given to maintaining a portion of the span as a vista open to pedestrians and cyclists. One entry referred to as the “Cloudwalk” concept could one day see the city side link to the Buffalo River taken down, with the lakeside portion left standing.

Schneekloth said she doesn’t view this as being practical.

“The Skyway-as-pedestrian park alternative is not the best choice for our city,” she said. “A ‘Cloudwalk’ will only be usable a few months out of the year due to our cold winter and winds. Additionally, unless removing the Skyway will magically make people stop driving cars in our city, removing the Skyway as transportation infrastructure means that a new road and seven new bridges will have to be built to reroute Skyway traffic. This will be colossally expensive, environmentally destructive, and incredibly destructive.”

Instead, she prefers the Skyway to remain as is, and accessible at times to walkers and bikers.

“We can have our ‘Cloudwalk’ on the structure as is,” Schneekloth said.

At this writing, an actual decision has yet to be finalized as to the Skyway’s future. Discussions continue on the federal level with Biden’s massive infrastructure plans. Any future state action more than likely is dependent on federal funding. In the meantime, local curiosity, opposition and discussions continue.

“The Skyway is a positive, interesting and spectacular part of our waterfront,” Schneekloth commented. “We propose that we work together to think of ways to use the Skyway more creatively. Besides closing (it) to traffic on designated summer afternoons, we have some great ideas for using the space underneath more creatively for public art, performance spaces, bike paths, skate parks, etc., as has been done in other cities (such as with the Gardiner Expressway in downtown Toronto).