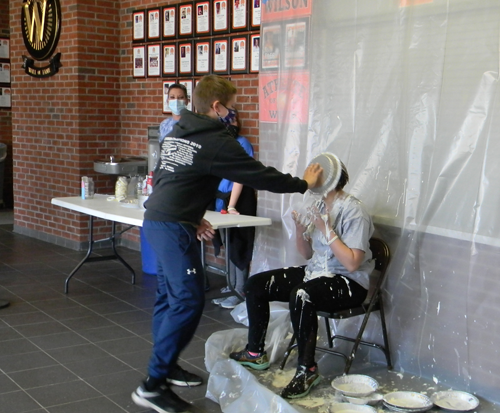 Rayn Cooper takes a pie for a good cause.

Story and photos by Terry Duffy

Call it a lasting impression.

Rayn Cooper, an eighth-grader at Wilson Middle School “took it on the chin” Tuesday to send a thank you to a special person who has made an impression on her life.

Dale Shank, a Navy veteran from the Vietnam era, is a youth hunting and firearms instructor at the Fin, Feather and Fur Conservation Society (3F Club) on Swann Road. He is currently battling skin cancer. Over 15 years, he has worked with young Rayn and numerous others.

As she learned of Mr. Dale and his battle with stage II melanoma skin cancer, Rayn took it upon herself to do something in appreciation. Over past months, she coordinated a bell-jar fundraiser that was launched at 3F and carried into the school and out to the lakeshore community. Thousands in donations were to come.

“He is one of the nicest people you will ever met,” Rayn said of her role model. “He is part of the pheasant program and takes youth hunters out to hunt so often. He can make me smile as soon as he walks in the room. Mr. Dale is one of the best people and deserves all the love and appreciation in the world.”

“It’s gone overly amazing!” Rayn said of the response. “I only expected to get maybe $1,000, but with everybody’s donations, from the 3F Club, and donations from companies like Mark Cerrone, I’ve gotten to $4,700. That includes the school, Stephenson’s Hardware, Warren’s Hardware. We got one at Grandma D’s, at The Great Foodini and at Anchor Spirits in Youngstown.

“It’s been just amazing. All of my friends, my relatives have been donating. Every place I go, the response has been very strong. The school district and businesses have been very supportive.”

On Tuesday, the school celebrated Rayn’s efforts with a pie-in-the face event where students and staff who contributed to her fundraiser had some fun for a good cause.

Throughout the morning, students and faculty took their turns with generously filled cream pies thrown at Rayn.

“It’s getting very greasy,” she laughed of her hair. “We’ve been doing this all morning. And yeah, I got soccer today, too.” 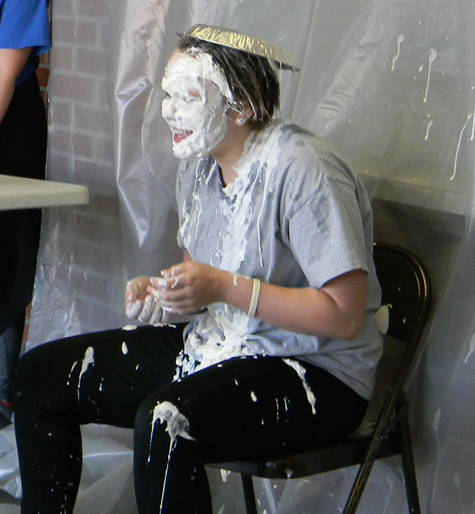 Rayn Cooper takes a pie for a good cause.

Shank said he wants the $4,700 raised to go to those he feels need it the most. That includes the cancer kids at Roswell Park and local veterans whom he works with at the club.

It’s what this adult mentor means to her – and to others.

“I got a lot of people asking me why would I be doing this,” she said. “Because Mr. Dale, he is such a big part of my life. He taught me how to be the hunter that I am today. He takes me out to go pheasant hunting, which helps me extremely. And he was one of the only people who would (encourage me). … He would always tell me, even though I am a girl, that doesn’t mean I can’t do anything better than all those other boys downstairs. He gave me the confidence I have today, to tell people that, yes, I do hunt, and I get better every day, because he helps.”

A confident young shooter, Rayn said she enjoys hitting the range at 3F where she has become quite accomplished with .22 gauge rifles, shotguns and .20 gauge rifles for pheasant hunting.

Shank said he continues to be impressed at Rayn and what she has done.

“It’s totally amazing that this girl could think of something like this, and do it. For a good cause in my name,” he said.

Shank spoke of his work at 3F.

“On a weekly basis, we have our children meet; we do various things (firearms training, hunting, etc.). … I try to teach these kids everything. … I kind of want to try to teach them to take over the 3F Club a little bit,” he said. “They’re young kids, but somewhere down the line, they’re going to remember, ‘Well, Dale taught me.’ … I want the kids to understand it’s a lot of fun.”

Shank said he wanted to get one message out to others: to be aware of the dangers of skin cancer.

“Look, my cancer came from sun exposure when I was a teenager, prior service, and during service time,” he said. “(My message is) keep the sunscreen on your kids, using it on your children, use it. It takes 40 years for this to develop. So, every time a little kid gets a sunburn, that’s on your way to getting this type of cancer.”

Shank said he continues to respond to the treatments and hopes soon to return to his work with the youth at 3F and help others.

For young Rayn and other young shooters, that’s awesome news.