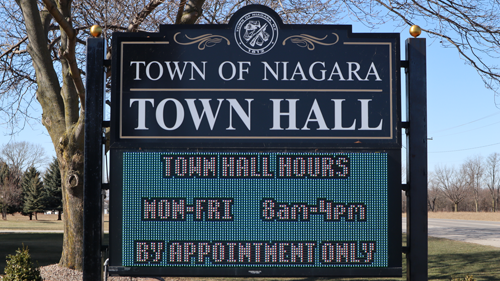 The New York State Department of Environmental Conservation is holding a public comment period regarding an air quality permit filed on behalf of a proposed asphalt plant for 4660 Witmer Road in the Town of Niagara. Written comments may be sent to Kerri L. Pickard-DePriest at DEC Region 9 Headquarters, 270 Michigan Ave., Buffalo, NY 14203. The deadline for comment recently was extended to May 3.

The Planning Board and Town Board approved the site plan in July. A negative declaration was given following SEQR review, meaning the project was determined to be consistent with DEC guidelines. The property had already been zoned as H-1 (heavy industrial).

Per DEC applications, the asphalt facility is connected to AL Asphalt, whose proposal for a similar facility in 2019 in the Town of Hamburg was met with pushback from residents. Opponents at the time criticized the plan’s location for being too close to a residential area.

Supervisor Lee Wallace said, “From purely a zoning point of view, we saw it as a good fit. It required no variances. A lot of times when we have a business going to an area that is already established, they have to have variances. … So now it’s up to the DEC to determine whether they feel it’s OK for it to go in that spot.”

Wallace also noted the Town of Niagara has another asphalt facility, a point that echoed comments by Building Inspector Charles Hasely, per July meeting minutes.

“We have one over on Miller Road – it’s been there for years and there are a few residents that live nearby, and we’ve never had one complaint,” Wallace said.

According to the company’s DEC application, the facility will produce a maximum of 150,000 tons of hot mix asphaltic cement (HMA) every year in order to maintain carbon monoxide and VOC emissions below the major source thresholds of 100 tons per year and 50 tons per year, respectively.

Particulate emissions from the asphalt dryer are controlled by a fabric filter baghouse with a 99% particulate removal efficiency.

In July’s Planning Board minutes, the company reported an odor analysis concluded there would be no detectable odor off the property itself. A noise level analysis reported similar findings. A traffic analysis showed peak hour for the facility will generate only 11 to 12 vehicle trips.

Wallace said these studies are available for the public to view.