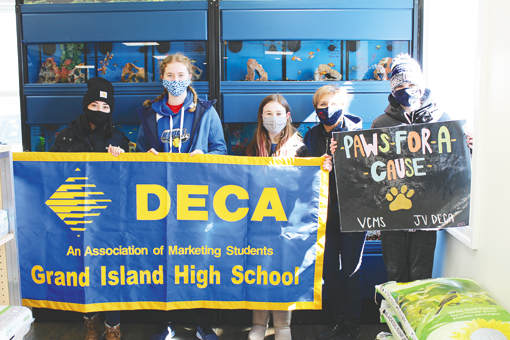 'Paws for a Cause' pet drive benefits SPCA

Story and Photo by Nathan Keefe

The pets at SPCA Serving Erie County will be getting an extra serving of treats, toys and comfort items, thanks to hard work and dedication March 13 by the Junior DECA team of Veronica Connor Middle School.

The group held its “Paws for a Cause” fundraiser at Island Pets and Feed, 2099 Grand Island Blvd. The DECA team was accepting dog food, toys and treats for the SPCA.

DECA member Abigail Szyprowski came up with the idea because of her own dog, a springer spaniel-Labrador retriever mix.

“I wanted people to donate things for dogs like they did for people. I have a dog at my house and I thought it would be nice for all the pets,” she said.

The students got the ball rolling by contacting the SPCA serving Erie County and Samantha Gieselman-Bedell, who owns Island Pets and Feed.

JV DECA Adviser Leanne Wills was pleased with how the pet drive was going this past Saturday. “It’s awesome. The kids are great. They came out early this morning to hold signs at the road and we’re here, happy to be supporting Sam. She was a former student at Grand Island High School, so we’re glad to be bringing business to not only her store, but to represent Grand Island and help out the SPCA.”

Wills said DECA kids were collecting all kinds of pet-related items for the SPCA. “We’re taking pillow cases, collars, treats, toys, blankets, washcloths – those are all things that can be donated. Also, in the future, we’re more than happy to bring things to the SPCA if we do get them, in addition to this fundraiser.”