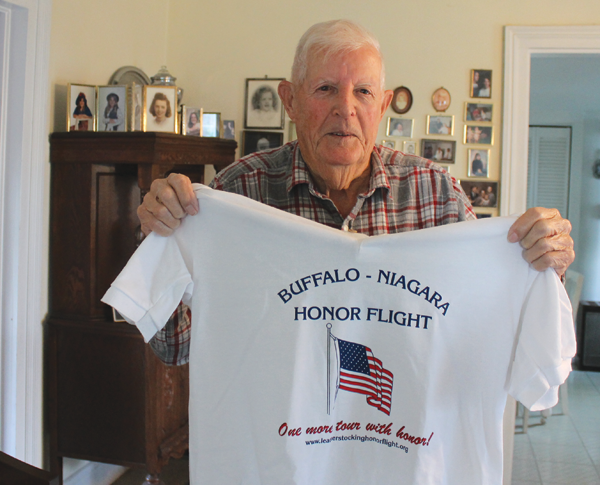 As the Island Dispatch turns 77 years old this month, the newspaper is proud to still be in touch with its very first subscriber, lifelong Grand Island resident Donald B. Loder.

He dropped a line to Publisher Skip Mazenauer with his subscription renewal to say that he’ll turn 99 in November and he is “still doing OK.”

We caught up with him by phone, where he spends his winters in Nokomis, Florida.

He recalled that his parents signed up to receive the Dispatch when Ollie Howard first founded the newspaper. Loder said Howard was his brother’s wife’s brother – so the Dispatch was in his family.

When the paper was first published, Loder said he was too young to be a regular reader, “but my folks liked it.”

He’s enjoying the winter home that he has been coming to for 46 years. A widower for 20 years, he has made lots of friends over the years in Nokomis. “That’s a great place to be,” he said. While in Florida, he lives in a park model trailer home and has many activities he looks forward to.

“I play pinochle and go to whatever functions they have here. Once a month they have something going. I talk to my neighbors and keep the place up and keep it clean. I’ve got to do laundry today!”

He hopes to return to Grand Island by late May. “I have to wait for my children. They don’t let me drive that anymore,” he said. His son, Don, lives next-door to him on Bedell Road, where Don Sr. has lived “forever,” he says. “My wife, Dorothy, and I built that house, stick by stick.

As to his health, “I’m great, I can’t complain at all,” he said. “No problems. I even planted a tree next door for a person.”

Loder is a World War II veteran who received well-deserved recognition for his military service when he boarded the Honor Flight for the trip of a lifetime in 2016. He joined 42 other veterans on a daylong visit to Washington, D.C., to see the World War II monument, as well as those for the Korean and Vietnam wars.