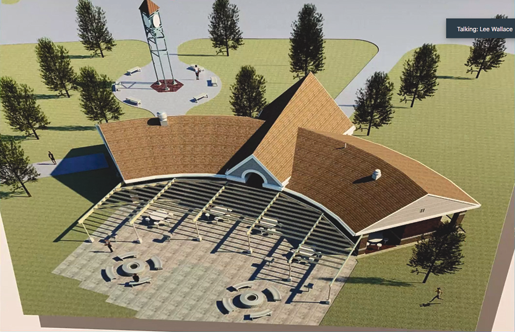 On Tuesday, the Host Community Standing Committee (HCSC), which administers and oversees projects financed by the Niagara River Greenway Recreation/Tourism Fund, awarded $3.36 million to Veterans Memorial Community Park in the Town of Niagara. The funds will be used to cover phases III and IV of the park’s master plan. The project was deemed consistent with the principles of the Niagara Greenway by the Greenway Commission on March 3.

The focal point of the phase III project is a 30-foot clock tower that will be surrounded by gardens, walkways and old-fashioned light poles. Additionally, phase III includes the construction of a “community square,” which will feature a community-use building that will house a concession stand, lavatories and storage, as well as an outdoor gathering area set to include gas fire pits, patio seating and a pergola style roof.

Phase IV will see the addition of a few exciting family-friendly amenities, including a brand-new miniature golf course, six bocce ball courts, and a park for large and small dogs.

Town of Niagara Supervisor Lee Wallace said that, aside for event rentals of the new building, there are currently no plans to charge visitors for the use of the new amenities. He said overheads for many of these additions are expected to be minimal.

Wallace noted the overall goal of the master plan is turn Veterans Memorial Park into a welcoming destination for families to utilize and enjoy.

“What we’re trying to do is – the Town of Niagara does not have a main street; we have Military Road, which is not even close to a main street,” he said. “It’s more of a highway than anything. So, we use this park for everything and we’re trying to create a place ... that has many family-oriented amenities and activities to make it a focal point and our gathering place, not only just for our residents, but for county residents and the surrounding communities as well.”

Phase IV will see an expansion of Elmer’s Pond. Plans call for widening and lengthening the pond, excavating and deepening it to allow for expanding species of fish and wildlife, as well as other environmental improvements to enhance the pond. There are also plans to construct a dock to both increase fishing opportunities and make the pond handicapped-accessible.

Of the $3.36 million figure, $1.277 million will come from the funds the town currently has in its Host Community Bank account. The remaining $2.083 million would be bonded over a 15-year period with a $160,000 bond payment to come from a portion of the $390,000 in Greenway funding the town receives annually.

According to the town’s application, the park project previously received almost $800,000 in Greenway funds for phase III. However, most of that money was not spent because construction bids for the project came in significantly higher than what had been approved. $160,000 was spent on preliminary engineering and design work.

Per the application, “once Phase III and Phase IV are completed, more than 60% of the Veterans Memorial Community park master plan will have been realized, making this facility a destination for Town of Niagara Residents, visitors and surrounding communities within the Greenway corridor.”