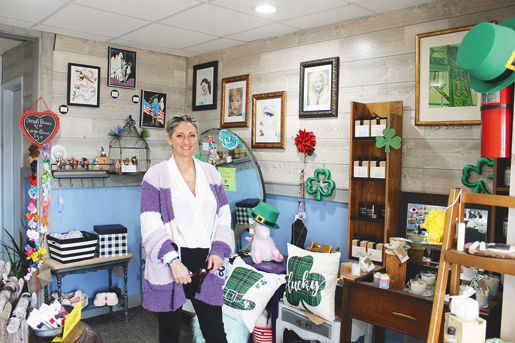 The Island Shoppe has iconic, artistic selection of gifts for special occasions

If you love Grand Island, chances are you’ll love The Island Shoppe.

Proprietor Josephine Ciffa has put together a unique blend of Island-themed souvenirs and specialty items to choose from, as well as artwork that carries charming references to Buffalo and Western New York.

She opened the doors Nov. 1 at 1733 Baseline Road, and is aiming to stake her claim on the hearts of gift-givers who love anything related to the pork-chop-shaped Island that most of her customers call home.

“I was here for the Christmas season, which was a lot of fun,” Ciffa said. Now that St. Patrick’s Day is around the corner, there are plenty of gifts that pay homage to the Emerald Isle, including T-shirts, wreaths and artwork.

She has an affinity for the arts and photography and is no stranger to retail management.

“I started in my 20s, I had a hat store on Hertel Avenue. That was my first brick and mortar. Through the years, this is probably my fourth gift store.”

When she lived on the West Coast, she had a souvenir shop near the Grand Canyon. She also had a little gift store on Grand Island Boulevard when she first moved to the Island. It featured art classes for children.

“But this company here stems from my CBD company, which I’ve had for the last four years. My husband started that company. It was just a CBD boutique.” The primary location was Hertel Avenue in Buffalo, and they opened a second store in North Tonawanda, where they tested the waters to gauge the interest in such a store. They did well, but decided they really didn’t need two stores. “Luckily, we closed that one right before COVID happened,” she said. They had to close down the other store for a few months because of the chill the pandemic put on the retail economy.

“Once we reopened, customers weren’t really coming out of the house,” Ciffa said. She said she did deliver to customers from inventory in her own home, but it didn’t make any sense to have a storefront at that time.

“But I didn’t want a home-based company, so that’s why I decided to come here.” She decided to add the gift store component, and said it has worked out really well. 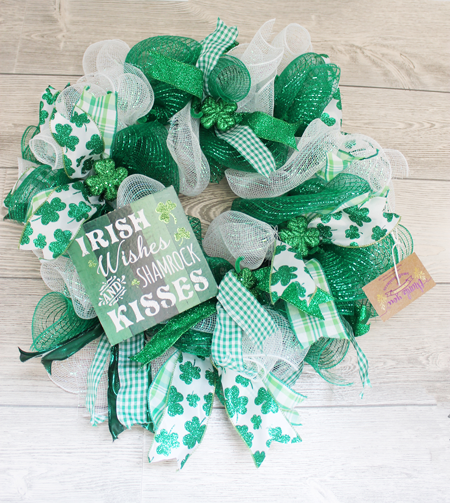 A green wreath for sale at the Island Shoppe evokes the Emerald Isle, just in time for St. Patrick’s Day. The shop at 1733 Baseline Road carries a variety of souvenirs and gifts with a Grand Island and Buffalo theme.

Grand Island and Buffalo souvenirs became a focal point in addition to the line of CBD products, and she added clothing to the inventory, as well.

Local artisans – about 90 percent of them from the Island – bring in their creations for customers who are looking for just the right gift and greeting card for that special person for a holiday, birthday or special occasion.

Ciffa and her family moved to the Island about 12 years ago. “It’s definitely home. I don’t even like leaving the Island anymore,” she said. She became a firefighter here and eventually was president of the Grand Island Fire Company. “It’s a great organization it really is,” she said. Currently, she is an EMT, in addition to her work in retail.

Customers who stop by to check out the Island Shoppe are usually looking to buy gifts, she said. “It’s great. My goal was to have that gift for everybody. So, if you need a gift for somebody, and you don’t really feel like going off the Island, you’ll come in and you’ll find that special gift for somebody.”

One of the unique gifts is fashioned to look just like a pair of legs in jeans and boots. It can be used as a plant holder or a holder of anything that fits, including candy, or even an extra roll of toilet paper. “Look at how cute they are!” Ciffa said. “It’s just different, unique stuff.”

She also carries oil-on-canvas artwork created by her father, Stephen Coppola, and watercolor art by her friend, Heidi Osinski. Artwork features vivid sunrises and depictions of the Grand Island bridges.

Every holiday, Ciffa decorates the shop in the appropriate theme, and there’s always something new to catch the customer’s eye. She just ordered an Easter Bunny costume – and says nobody will know who’s under the costume – but it just might be her. She and her husband have two teenagers who do help out in the store.

There will be some Easter-themed activities for the kids at The Island Shoppe. Weather permitting, she said, an Easter egg hunt will take place outdoors. If skies aren’t fair, she’s got plans to set the stage for a hunt right inside the store. Easter comes early this year, April 4, and Ciffa will definitely be ready for it. “I just like doing fun things like that.” Adult art classes are planned for the near future. She likes to do seasonal promotions, too. “Just to keep it exciting,” Ciffa said. “I want people to come in ad have a wonderful experience shopping.”

She said there are plenty of repeat customers who realized, once they enter the shop, “If I need a gift, I’ve got a place to go to.”