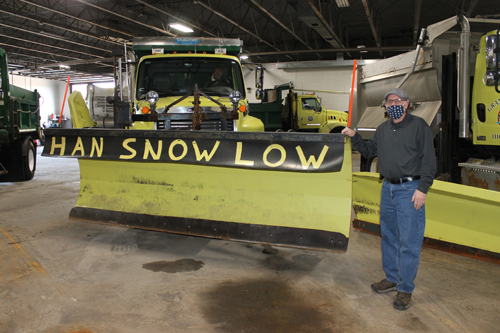 Town Highway Superintendent Richard Crawford stands by one of the town's plows, which playfully sports the phrase "Han Snow Low," a play on Han Solo, a fictional character in the Star Wars franchise created by George Lucas. (Photo by Karen Carr Keefe)

Grand Island: Snow may be departing, but plow controversy persists

Snowplows were on the minds of Town Board members at a March 1 workshop meeting. Not because of a big snowfall, but because when the flakes flew furiously in mid-February, dozens of residents called town officials to complain.

Some plow drivers were depositing piles of the white stuff from driveways into the roadways, causing a hazard to drivers. Not to mention, it’s illegal to do that.

Councilman Tom Digati encountered the problem as he drove Long Road to take his kids to day care. He said in front of six houses plowed by the same plow operator, there was a foot of snow in the roadway. “If someone hits that at 45 mph, someone’s going to get hurt,” he said.

Council member Mike Madigan expressed concerns during the workshop meeting that the town would be shooting itself in the foot if it tried to police private plow drivers through regulation and enforcement measures.

Town Highway Superintendent Richard Crawford heard the hue and cry and came up with a solution he had rejected some years back: having the town issue permits to the private plow drivers to increase accountability and decrease hazards and complaints.

When Crawford was a Town Board member, he and former council member Mary Cooke looked into the issue and met with then highway superintendent Ray Dlugokinski. “We had a lot of discussions about it and decided we would do public education.” He said the campaign was not all that successful.

“So, years go by, nothing is done about it, other than it still being an issue in within the community that the plow drivers are leaving the snow in the road.” Crawford said.

“Skip Merkl and I, my deputy highway superintendent, we did an investigation of the area communities – Clarence, Holland, Orchard Park, Tonawanda – and just about every surrounding community in Western New York has a registration for the plow drivers to do two things. They’re out there, and we respect this. They’re making their living doing landscaping and/or tacking on plowing in the wintertime. And that’s a service that they are providing to the residents.

“In turn, we’re doing the same thing: We’re opening up the roads so that people can get up in the morning and go to work, school, buses can get out there and get kids to school. When there’s heavy snow, fortunately, these drivers are looking to get in and get out as quick as possible. And in doing so, they leave a lot of snow and trails across the road and roadways. And there is state law that prohibits depositing any material in the roadways.

“They could actually be ticketed just on that by any law enforcement person. We’re not trying to do anything to penalize a plow driver. What we’re trying to put forth is a registry program that you know the rules, you abide by the rules, and everybody will get along just fine. And you won’t have any issues. They want to work with us just as much as we want to work with them, because Job No. 1 is to keep the roads safe.”

Crawford said that if town plows are clearing the roads and the private plow operators are redepositing snow on the roads, “We’re defeating the purpose.”

He said that also holds true for the neighborhoods when you’re snow blowing your driveway or your sidewalk. It’s illegal for you to snow blow what’s on your sidewalk into the road. He said it’s just a matter of turning the chute the right way and keeping the snow where it should go.

Where the issue stands now is that the matter is under study. “We are going to get back to the Town Board with some additional information about the local communities,” he said. “We drafted our proposed registration from looking at two or three and taking what we thought were the best points out of it and putting one together.”

So snow may be in the rear-view mirror now, until next November, but the town Highway Department is on the road to a solution that satisfies all parties.