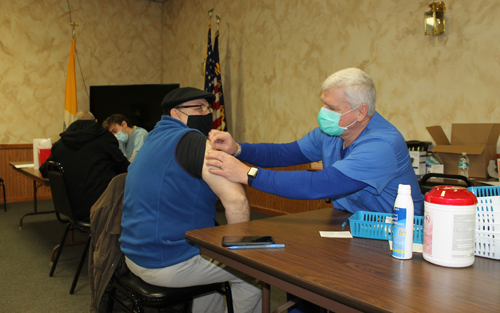 Jack Giardina of the Town of Tonawanda gets his first COVID-19 vaccination Wednesday morning at the Knights of Columbus Hall, 1841Whitehaven Road. One hundred of the Moderna vaccines were administered, with proper social distancing and masks, on Wednesday by Island Prescription Center, 1728 Grand Island Blvd. The pharmacy has administered 700 shots to date. (Photo by Karen Carr Keefe)

While the prospect of an injection is not usually a happy occasion, the administering of COVID-19 shots at the Knights of Columbus Hall on Wednesday was, for some, a cause to celebrate.

Jack Giardina had nothing but good things to say about his first shot, administered by Island Prescription Center owner and pharmacist Michael Manuszewski, whose pharmacy was on its third round of giving the shots.

The process was orderly, relaxed and seemed to be comforting to those who came to be vaccinated.

“It was really simple,” Giardina said. “One, two, three and you’re out. They did a great job and the shot didn’t even hurt,” the Town of Tonawanda resident said.

“Fantastic” is how his wife, Rhetta Giardina described getting that first shot. “I’m very happy because I spent a lot of time on the computer — and no luck. My sister-in-law came last week. She gave us the phone number, and we called and got in this week,” she said. “I think it’s fantastic on how good he’s taking care of seniors.”

Marie Rajczak of Ransomville said it was nice to get that first shot over and done with. “No pain, no hurt, nothing,” she said. When asked if she was relieved to get the shot, she said: “We’ll see.” She said she put a lot of effort into getting an appointment, checking online sites until she finally connected with Island Prescription Center about a week-and-a-half ago.

“Things are going very well. I think we have the process down pretty well to handle the volume that we expect.

Supplies of the vaccine have been unpredictable in many parts of Western New York, but Manuszewski has had good luck in recent weeks. As to next week? “We’ll see what we get. It’s up to the state as to how many they send and where we’re going to be.”

“Pretty much everybody has said how excited they are to get it and how much of a relief it is – the big stress reliever from them. They like the process that we’re doing where we’re calling them to schedule the appointments, although we’re probably not going to be doing that much longer, now that we’ve pretty much done our population over 65. But people under 65 are going to have to figure out how to use a computer,” he quipped.

Manuszewski said that while they have a lot of people coming from the Island, there are also a lot of off-Island customers for the vaccine. He explained that a lot of the older population has trouble with computers, and his pharmacy’s method is an easier way to do it. “They contact us to get put on the waiting list, and we reach out to them when they have appointments. It’s just one phone call, and they’re on the schedule,” he said.

Island Prescription Center will be administering second shots of the Moderna vaccine within the prescribed time frame, then they will be adding new customers.

“We’re going to continue vaccinating people, mostly under 65. Most of our waiting list is under 65.” He said the pharmacy has gotten through to 80% to 90% of the people who contacted them in the over-65 group. Next, they will be focusing more on people ages 60 to 65, and other categories, as the state permits an expanding of the ranks of those eligible to receive the shots.

Manuszewski said for the most part, going forward, they’re going to rely on people to book their own appointments on the Island Prescription Center website. They’ll get an appointment, and the pharmacy will notify people when they get a shipment of the vaccine.