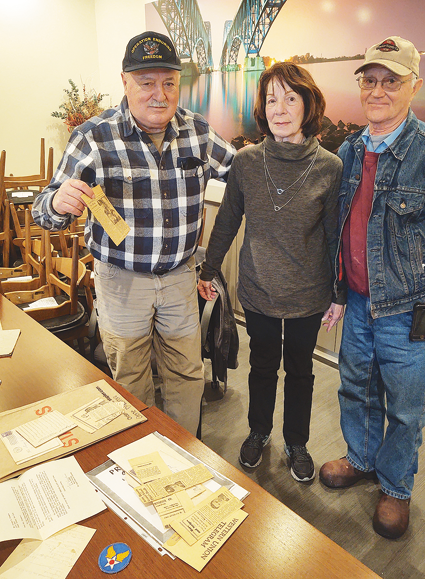 Gene Dinsmore, Diane Lapp and Ray DeGlopper with some of the information they have collected about Second Lt. Eugene F. Dinsmore.

Memories are painful for families of Grand Island KIAs

Each of the 18 families of Grand Island veterans listed on the Killed in Action monument at the southern end of DeGlopper Memorial at Baseline Road and Grand Island Boulevard can share tales of extreme loss of their loved ones and the heartache felt for those who sacrificed their lives fighting for our country. What makes the stories even worse is when the communication of these horrific messages from the Armed Forces leaves uncertainty and then hope, before the reality of death is apparent to families.

Consider the story of Eugene H. Dinsmore and his wife, Catherine Bartram Dinsmore, when World War II began in 1939. They lived on a family farm at 2140 Love Road that dates back to when the Dinsmores settled on Grand Island and operated four farms in the mid-1800s. Melville “Chubb” Dinsmore, one of Eugene and Catherine’s eight children, had been drafted into the U.S. Army early in the war. When a younger son, Eugene F., graduated from Tonawanda High School in 1940, another brother landed him a job at the Carborundum Co. in Niagara Falls. The company was considered essential to the war operations because it made grinding wheels for the military, assuring Eugene was safe from being drafted. That allowed him to help his dad and brother on the family farm during the day, while working in the plant at night.

Whether it was the nationwide promotion to serve your country during the war, his desire to become a pilot or following in the footsteps of his brother or another Tonawanda High School graduate, Charles N. DeGlopper, Dinsmore enlisted in 1942. He completed pilot school and flight training the following year and in early 1944, he arrived in England and was assigned a new P-47D fighter aircraft.

Back then, the only correspondence between a soldier and his family was through letter-writing, which Eugene did regularly until he arrived in St. Dizier, France, in November 1944 to join the 411th Squadron, 405th AAF Fighter Group of the 9th Air Force. The assignment was classified, and his letters were censored by superiors, but his parents knew he was alive and well until the letters stopped being delivered a month later, according to his nephew Gene Dinsmore, a veteran who now lives outside of Syracuse. He recently sat to tell Dinsmore’s story to the Island Dispatch with his sister, Diane Lapp and her husband, William, and veteran Ray DeGlopper, who is Charles N. DeGlopper’s nephew and whose mother, Margaret, was Dinsmore’s aunt.

Gene Dinsmore came to the meeting with a file of old newspaper clippings and correspondences the family used to piece together the end of his uncle’s life and the heartbreak it caused his grandmother.

In mid-December, Dinsmore’s squadron was assigned to an “Armed Recce” mission in the vicinity of Koblenz, Germany, a reconnaissance mission with permission to attack any “targets of opportunity” discovered along the way. The mission report indicates it attacked and destroyed a large ammunition storage site, but Lt. Dinsmore’s plane was hit by enemy fire. Gene Dinsmore said another American pilot, Lt. Walter A. Grabowski “reported seeing the plane on fire and Eugene bailing out by parachuting to the ground, but they had no knowledge after that because it was enemy territory.” Ironically, Grabowski grew up in Wheatfield and attended flight training school with Lt. Dinsmore.

The first communication about their son came in a letter to his parents from his commander saying Dinsmore was missing in action in Germany. It was followed by a Western Union telegram on Jan. 2, 1945, to Mrs. Catherine E. Dinsmore that stated, in part, “The Secretary of War desires me to express his deep regret that your son, Second Lieutenant Eugene F. Dinsmore has been reported missing in action since Seventeen December over Germany. If further details or other information are received, you will be promptly notified.” It was signed “Dunlop Acting the Adjutant General.”

“That was World War II, and everything that was going on was in a turmoil, including the communication,” Gene Dinsmore explained. “No one had a lot of concrete information about what happened or where he was. He had landed in enemy territory, so there was no way they could send medics or an ambulance, so he was listed as missing in action.”

According to what Gene learned over the years, Eugene’s mother regularly wrote letters to the Army asking for updates on her son. Each time she received a letter back saying he was missing in action.

Excitedly, Mrs. Dinsmore found a two-page hand-written letter from Mrs. Jack Jones, who said she and her husband were listening to their short-wave ham radio and heard a broadcast from Berlin from an “American girl – a Red Cross worker” who reads messages about American soldiers and asks those listening to forward the information. In the letter, she wrote: “Your boy is alive – tho injured – so where there’s life there’s hope – and each day you don’t hear is ‘good news’ – and you will know he’s holding his own. Prayers work miracles and will pray hard with you.”

The letter went on to say her son is in a hospital – “getting every attention.” From what the woman who transmitted the information said, “your boy gave your address and said you all had a chicken farm” before stating Eugene’s injuries were “a broken collarbone – the bone is exposed – second- and third-degree burns, mostly on one leg with a little on the back and a touch of blood poisoning, but that everything possible had been done to counteract the poison. He also had three blood transfusions and plasma and his condition was really critical – but he’s still hanging on.”

The letter-writer added, “With all their other faults, we do know German doctors and scientists are very fine so with their desire to pull him thru, he may emerge alright. With the Red Cross reporting on him, you will probably hear from them.”

After reading the letter, Gene learned his grandmother yelled, “He’s alive!” but in very serious condition but he is in a hospital and he is alive.”

“The only problem with the letter was no way to verify anything,” Gene explained. “Over the years, we pieced it all together and realized Eugene had died before our grandmother received the letter. The Germans, in a propaganda effort, would insert names of captured soldiers who were dead, to those sending out the messages. We found out he really was in a German Prisoner of War camp and the nurse in the hospital was really a Belgium POW in the same camp.”

Gene Dinsmore said when the American forces overtook where the POW camp was, there was a makeshift cemetery and one of the plots was marked Eugene F. Dinsmore. The Army dug up all the graves and moved them to a temporary American cemetery in Belgium for Dinsmore’s second burial. A year after the war ended, the Dinsmores received a letter from the War Department in December 1946 stating the location of their son’s plot in a cemetery outside of Liege, Belgium. They also gave the family the option to leave his remains there or transport them to Grand Island.

The Dinsmores, whose older son had returned from the war, now awaited the arrival of Eugene’s remains for a burial in Maple Grove Cemetery on Stony Point Road, which is also where war hero DeGlopper is buried.

As Gene, Diane and Ray grew up, they said the families of World War II victims did not talk much about the missing family member, but they could surely feel the hurt the family members felt. “When I was a young boy, my mother would take us to visit Grandma, and every time we went there she cried,” recalled Gene Dinsmore, whose parents named him after his uncle. “As a little boy I did not understand why she cried but I do remember her always hugging me and giving me something that belonged to Uncle Eugene – a watch, a radio or a book.”

Diane, whose mother was a distant relative of George Bartram, an Islander who fought in the Civil War, recalls conversations with her mom about how she grew up and “they all played together, and how much she missed Uncle Eugene after he was gone. Each July 4, we would go to DeGlopper Park for the veterans ceremony, which was very important to her, but it was also very painful.”

Ray DeGlopper, commander of the Grand Island American Legion 1346 and vice chair of the DeGlopper Memorial Expansion Committee, is looking forward to the unveiling of the 6-foot-7 statue of his uncle and the stantions that tell the story of the Island’s 18 KIAs.

“I just wish it was done 40 to 50 years ago, so more members of their families could be there to enjoy this recognition,” he said.